Warlords of Draenor is a potent reminder that World of Warcraft is still relevant.

After huge improvements to the base MMO in its first two expansion sets, 2007's The Burning Crusade and 2008's Wrath of the Lich King, Blizzard settled into a steady tempo of a solid expansion pack every two years. The company has never released anything disastrously bad for World of Warcraft, but after 10 years of existence, any developer might be forgiven for opting for more of the same with expansions rather than shaking up a formula that clearly works.

Warlords of Draenor is the first major leap forward for World of Warcraft in six years. Along with a strong, nostalgia-laden plot, it tweaks the core gameplay in brilliant ways and offers evidence that Blizzard has been paying close attention to the strides made by its competitors in the MMO space. And, in case anyone has forgotten, it proves that Blizzard can pull it off better than anyone else.

story quests have a real sense of progression to them

Narrative plays a bigger part in Warlords of Draenor than it has in any previous expansion. Crushed by his defeat during the events of Mists of Pandaria, fallen Horde leader Garrosh Hellscream travels through time to the orc homeworld of Draenor. Once there, his actions split this universe into an alternate timeline — one where he controls the orc invasion that started the whole Warcraft timeline back in 1994's Warcraft: Orcs and Humans.

As goofy as the concept is, Blizzard plays it completely straight-faced, and against all odds, it works. A great introductory zone sets up the titular warlords as the expansion's main villains, and each subsequent zone sees you struggling to push back the tide against one of them. The story quests have a real sense of progression to them, and since events in the quests can actually change the look of the zone around you, they have a sense of stakes as well.

The plot is also bolstered by more cutscenes than ever. If you've long considered MMOs one of the few genres safe from cutscenes, you may despair, but Warlords of Draenor uses them wisely. They're generally saved for opening or closing off lengthy quest lines, and they're always relatively brief. They also tend to provide easy-to-grasp sketches of the characters involved, so you can follow along even if you haven't been reading the reams of quest text from non-player characters.

Of course, storytelling isn't Warlords of Draenor's massive innovation. Draenor pushes World of Warcraft's zone design forward with a new sense of sophistication, building on 2013's Timeless Isle update. Timeless Isle set aside questing, and focused instead on treasures, powerful enemies and other adventures for players to discover — all without the need to click on a character with an exclamation point above their head.

But where Timeless Isle was a tiny proof of concept, the four or five zones you'll focus on throughout Warlords of Draenor push that concept to its logical and fantastic extreme. There are still focused quest lines to guide you through each zone, but along the way there are dozens of distractions — hidden treasure chests, lengthy bonus objectives tied to small areas, dozens of rare enemies who drop great loot and more. 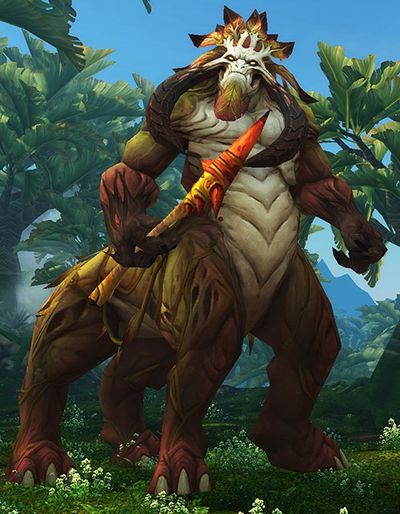 Warlords of Draenor didn't ask me to make a beeline from quest objective to quest objective; I couldn't walk far in any zone before I was pulled toward something else to do. This expansion adds a sense of exploration to World of Warcraft that has felt missing for years as Blizzard has embraced slick, fast-moving, quest-heavy content. It feels like the game has discovered a balance for the first time, a way to guide players through the world with quests while also providing motivation and rewards for taking your time and exploring every inch.

While Warlords of Draenor's plot is entertaining on a character level, it contains some thematic strangeness that I had difficulty shaking. In particular, there's something troubling about the eagerness with which the Iron Horde — that is, the majority of the orcs on Draenor — are painted as soulless aggressors. This oddity is especially pronounced when you're fighting on the side of the Horde, with dozens of orcs by your side.

Fighting back against an enemy invading your home world is one thing, but Warlords takes the fight to their home and has you engaging in tactics like burning down villages. There's minor justification for these actions presented in quest dialogue, but it didn't strip away my nagging sense that players were being asked to do something wrong here.

Perhaps this is part of calling back to the original Warcraft, but after Blizzard has done so much work over the last 10-plus years to build up orc characters and culture, it feels bizarre to regress to referring to them as "savages." There's still a chance this problem could be addressed as the plot progresses in content updates for the expansion, but I'm skeptical.

It helps as well that many of the new open world activities reward "Resources," which tie into another great addition to World of Warcraft in this expansion: garrisons. The Warcraft series started as base-building, real-time strategy games, but Warlords of Draenor is the first time the MMO has really focused on that element. As you invade Draenor, your character is put in charge of your own Horde or Alliance base, allowing you to choose which buildings you create and how you wage war.

One element of World of Warcraft that hasn't changed — and doesn't really need to — is dungeons. At this point, Blizzard has basically perfected the art of short, challenging, satisfying dungeon experiences.

Warlords of Draenor has some great set piece dungeons — such as one that takes place aboard a moving train — but whatever the setting, they all follow the same format. You fight a few packs of smaller enemies, then a boss with an interesting pattern you need to learn, then repeat two or three more times. It's quick enough to avoid frustration even when the bosses are difficult.

One nice change to the formula is the idea of personal loot, first introduced during Mists of Pandaria. Rather than sharing loot that everyone in the party rolls dice on, each party member gets their own loot specialized to their class. This means you're basically guaranteed at least one piece of loot during a dungeon run; you're not going to lose it to some other greedy jerk in the party. Tiny tweaks like this make it less of pain than ever to devote time to dungeons.

To give an example, my character is an alchemist, so one of my first buildings was an alchemy lab. This takes up a small plot, but a garrison only has so many plots of each size — so I may have preferred an enchanter's study or engineering works depending on my profession. Other buildings are unrelated to crafting, like the war mill, which gives you a higher chance of loot randomly being upgraded when you pick it up (another simple but powerful addition to the game).

By the time my garrison reached level three, there were far more buildings I wanted than I had space for, forcing me to make some tough decisions. But whichever buildings you go with, the garrison offers tons to do and further means of differentiating yourself from other players. It also urged me to work together with my guildmates, building structures they lacked and focusing on harvesting materials we all needed for successful raids in the future.

Garrisons also open up a follower system. As you journey around Draenor, you'll convince various characters to join your cause. Back at the garrison, you'll be able to send them on timed missions, rewarding you with money, resources, loot upgrades and more. Each follower has their own equipment level and special abilities that can counter the abilities used by enemies on certain missions, creating a system with more depth than it first appears.

Like much of the garrison, followers and their missions encouraged me to return often to gather rewards and send people out on new tasks. It made me feel like a real commander, with a responsibility to keep things running as efficiently as possible. In fact, I have logged in to check on my followers twice while writing this review.

I was surprised by that renewed sense of interest in and devotion to World of Warcraft. After my own lukewarm reactions to the last couple of expansions, I didn't really expect to get pulled in again. But here I am, logging in every night to run dungeons and finish leftover quests, to grab a couple more achievements or work on raiding plans with my guild. Even as I write this, I'm fighting the urge to play. Warlords of Draenor isn't just the best Warcraft expansion in years; it's a return to form as the best MMO in the industry.