Halo: The Master Chief Collection is a historical document.

At E3 this year, the focus started on the 10th anniversary of Halo 2 and its pending "Anniversary" treatment, continuing what Halo developer 343 Industries started with 2011's Halo: Combat Evolved Anniversary. But just a few minutes later, the other shoe dropped: Halo 2: Anniversary would launch as part of The Master Chief Collection, an anthology of all four of the Master Chief's Halo titles.

We've seen game collections in the past, with compilations like Super Mario All-Stars and, in recent years, titles like the God of War Collection. But rather than taking a comparatively easy route moving the story content from the older games as-is to a new platform, 343 is doing something unprecedented: collecting the distinct multiplayer components from all four games and presenting them faithfully, all in one place. The result is a Master Chief omnibus almost beyond reproach.

The higher frame rate is a universally positive improvement

For the uninitiated, I'll try to be brief: Each of the games contained in The Master Chief Collection is one of the most critically and commercially successful first-person shooters of all time. As presented here, The Master Chief Collection is a particularly interesting timeline of both first-person shooter design and the evolution of the Halo series in particular. Halo: Combat Evolved introduced the wide-open combat sandboxes that would define the series along with its triumvirate of guns, grenades and melee attacks. Halo 2 added dual-wielded weapons, greater story ambitions and a heavier multiplayer focus designed to sell Xbox Live to the masses. Halo 3 introduced map editing, equipment and bigger levels, while Halo 4 added more sophisticated character movement and player abilities to the series.

Each game holds up remarkably well — which is aided to tremendous effect by each game's move from its traditional 30 frames per second to a steady 60. While this makes for a smoother-looking game in each case combined with the jump to 1080p, it has a much more fundamental effect on how the games play. While Halo has never controlled poorly or slowly, the higher frame rate is a universally positive improvement, making for even more responsive controls and games that feel faster as a result.

The legacy Halo fan in me wishes that 343 had enabled me to play the games at 30 frames per second as well, if for no other reason than to make a more direct comparison between the feel of the originals and these remasters. But it's a small complaint. Every game feels otherwise faithful, but, well, better.

While Halo: Combat Evolved Anniversary, Halo 3 and Halo 4 have all seen some visual tweaking — particularly Halo 3 with some lighting improvements in addition to its bump to resolution and frame rate — it's clear that the most attention in this respect has been given to Halo 2 with its new Anniversary overhaul.

As with Halo: Combat Evolved Anniversary, at the heart of Halo 2: Anniversary sits the untouched core game, original graphics and sounds intact, albeit in higher resolution and frame rate. But on top of that sits a completely redone visual presentation, with new character models, environment details and lighting. Even the soundtrack and sound effects have been completely re-recorded, the audio mix completely redone.

Switching back and forth between the original and remastered visuals and sounds is now an instant transition — in both Halo 2 and Combat Evolved — rather than the fade-to-black switch from last time, and I'll admit to swapping back and forth on a regular basis, just to see how things had changed. While the new graphics aren't state of the art given the current-gen status quo, comparing them against the 2004 visuals is a harsh reminder of my nostalgia's kindness to games I played when I was younger.

The Master Chief Collection explores the development of the series

The improved in-game graphics and sound are appreciated, but the star of Halo 2: Anniversary comes in direct response to the Halo: Combat Evolved Anniversary campaign's biggest problem — its cutscenes. While Combat Evolved Anniversary developer Saber Interactive could improve and overlay new assets and visuals on top of the original games, it couldn't change the animations underneath. This led to cutscenes and story elements that felt even more obviously dated and wooden.

343's solution for the same problem in Halo 2: Anniversary? Just under an hour of frequently jaw-dropping pre-rendered movies courtesy of Blur Studios, using the original voice acting from Halo 2. And even here, you can switch at any time between the new presentation and the old, making for perhaps the most jarring juxtapositions in the entire package.

This lavish treatment serves to make a 10-year-old game feel unfamiliar and exciting, though the new coat of paint only works because of how well the underlying structure holds up. 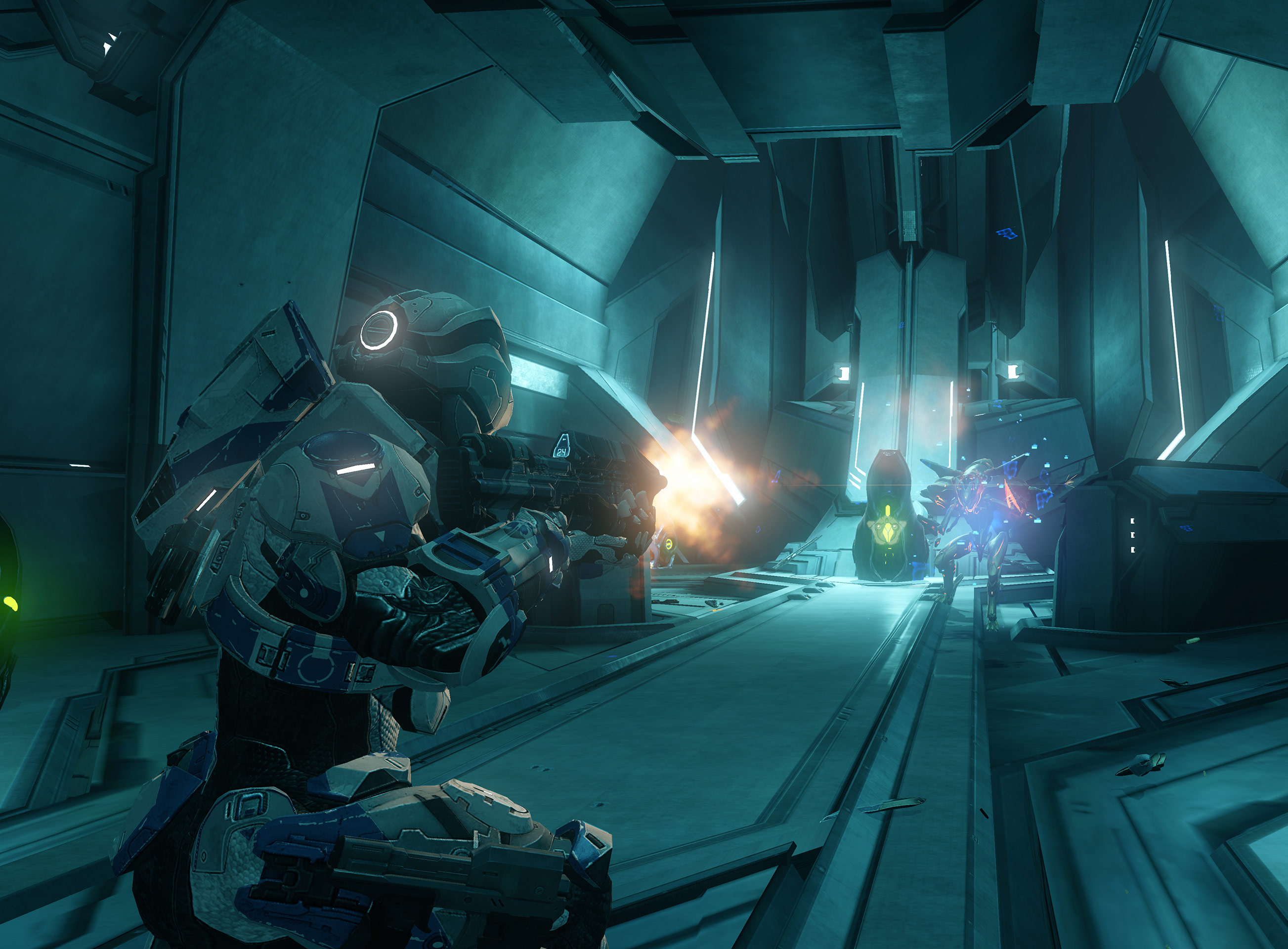 Whether you're buying The Master Chief Collection digitally or on disc, it'll be impossible to avoid a massive download in the form of its approximately 20 GB day-one patch. At the time of this review, that patch is live, adding multiplayer support and a considerable number of bug fixes and performance improvements across the board. If you're buying the game at retail, be aware that while our overall chapter progress in each Halo title was preserved after the patch, our mid-mission checkpoints were lost after the update.

The updates aren't done yet. Matchmaking for multiplayer won't be enabled until Nov. 10. Our impressions of multiplayer in The Master Chief Collection are based on previous experience with the titles involved and a daylong play session hosted by Microsoft at its San Francisco-based loft.

Meanwhile, at least two major pieces of content won't make The Master Chief Collection's launch. Halo 4's cooperative Spartan Ops mode is scheduled to be added to the game in December, according to 343. Perhaps more anticipatedly, Halo 5's multiplayer beta is set to launch on Dec. 29.

Every game is presented through the same unified menu system, with all content unlocked and available right from the start. This means that for the first time, I could move directly from the climactic chase at the end of Halo: Combat Evolved to the defense of Cairo Station in Halo 2, or transition from the cliffhanger ending of Halo 2 to "finish the fight" in Halo 3. And it's also a chance to truly understand how much changed from game to game, whether in the massive shift in physics from Halo: Combat Evolved to Halo 2 or the continual, unending evolution of the series' assault rifle.

The Master Chief Collection's structure even encourages this kind of exploration: There are several "playlists" — collections of levels with specific themes that jump from game to game. But nowhere is Halo's aggressive evolution more apparent than in the collection of every multiplayer map from every core game in the series.

Every game's multiplayer is preserved as it existed at release, or its final content patch. This includes Combat Evolved's multiplayer and maps, which were omitted from the 2011 Anniversary release, and Halo 2's original multiplayer, which became defunct when the original Xbox's version of Live was shut down in 2010. 343 has also created updated versions of six Halo 2 maps with improved graphics, vehicles and environmental features.

Multiplayer playlists can jump from game to game if desired, which leads to an often disorienting period of adjustment, but it underscores how much really changed between each release — and how fun each game still is, even removed from its specific historical context. Every game holds up, despite its particulars and flaws (like Combat Evolved's completely broken weapon balance).

It's this part that makes the entire package on offer so surprising. 343 could have sold much of this separately for far more than the regular game retail price they're charging, particularly the lavish Anniversary treatment for Halo 2. Given the enormous amount of Halo on offer, it feels greedy to complain about the absence of "stuff" from the collection, like Halo: ODST and Halo: Reach (though I do wish they were here).

But some supplementary content is disappointing in its absence, given the otherwise comprehensive nature of The Master Chief Collection. There's a distinct lack of making-of and documentary content, which is surprising, given how meticulously watched and tracked the makings of Halo 2, Halo 3 and Halo 4 were. There's a cornucopia of collector's edition content that shipped with those games that's nowhere to be found here.

This may sound like a nitpick, but The Master Chief Collection suffers somewhat as a history and primer to the series for the lack of real-world release context for each game that Microsoft and 343 should be more than capable of providing. There is a new documentary for the creation of Halo 2: Anniversary, which reveals some previously undisclosed, fun bits of trivia: For example, guitarist John Mayer contributed to the original Halo 2's score unattributed in order to avoid potential conflicts with his agent and label, all out of a desire to participate in the creation of the game. But the kinds of unvarnished, unflattering explorations of Halo 2's development that were present even in the 2004 documentary that accompanied its Collector's Edition are nowhere to be found, and are missed.

Other complaints are small, but may be a bigger issue for some. Split-screen multiplayer is present in every game, but Halo: Combat Evolved and Halo 2 both drop to 30 frames per second with their Anniversary modes enabled. More annoying for me is The Master Chief Collection's reliance on the Halo Channel for supplementary material that 343 has included. Halo 2: Anniversary adds a collection of terminals all its own, fleshing out the Arbiter and Heretic's stories in-game if you can find them. This is welcome, but in order to view any terminal, the game switches to the Xbox One dashboard and launches the separate Halo Channel app. If you're offline, you're cut off from terminal content.

Ultimately, these issues are small nicks in an otherwise intimidating facade. Halo: The Master Chief Collection sets a bar that other remasters and collections will have difficulty reaching, much less topping. For players new to Halo, who have missed any of the included games, it is a stunning introduction to one of the most beloved series in video games. For Halo fans, it's a package that shows almost as much respect and affection for the Master Chief as they do.

Halo: The Master Chief Collection was reviewed using a "retail" downloadable code provided by Microsoft. Additional impressions were based on a multiplayer event held by Microsoft on Nov. 4. You can find additional information about Polygon's ethics policy here.

About Polygon's Reviews
9.5 Xbox One