The Sun at Night has the most intriguing mix of highbrow and lowbrow ideas I've ever played in a game.

It's a 2D platformer/shooter where you play as a robot dog with a head-mounted gun, fighting bears with laser cannons, tigers with missile launchers and giant mutant fish. It's a goddamned video game and it wants you to know it, wearing its dopey '90s arcade influence like a badge of honor.

But The Sun at Night is so much smarter than it initially lets on — with a fascinating alt-history universe and hard-hitting commentary on war and the Soviet brand of socialism. The game nearly loses its footing with a few frustrating issues, but I was drawn in by its intoxicating mix of ideas.

The Sun at Night stars a robotic version of Laika, the real-life first dog in space from the 1950s. Laika crash-lands in a cave near a band of resistance fighters trying to survive in a brutal war-torn world, overrun by a Soviet-esque regime. You're soon sent out on a mission to investigate a nearby bunker, where bizarre, mutated creatures have been sighted.

Gameplay takes place across a series of labyrinthine 2D levels, each with dozens upon dozens of rooms filled with enemies, mission objectives and power-ups. You control Laika with the left stick and shoot with the right, taking on the various robots, soldiers and exotic wildlife. And you're tasked with exploring and investigating the world before you — with a series of main quests and optional side missions that all lend story details and other goodies. It's familiar territory, but well-balanced between combat and exploration.

Accompanying the core gameplay is a substantial upgrade tree, which you can use to improve Laika's offensive, defensive and general abilities. As long as you're diligent and seek out enough "nano batteries," you have a breadth of options. I chose to focus on making Laika more nimble, with an upgraded jump and more powerful shields to aid in exploration. But you can choose to make her an offensive powerhouse, beefing up the various guns. I enjoyed customizing the experience through upgrades, and felt a tangible difference with every modification once I was back in the main game. 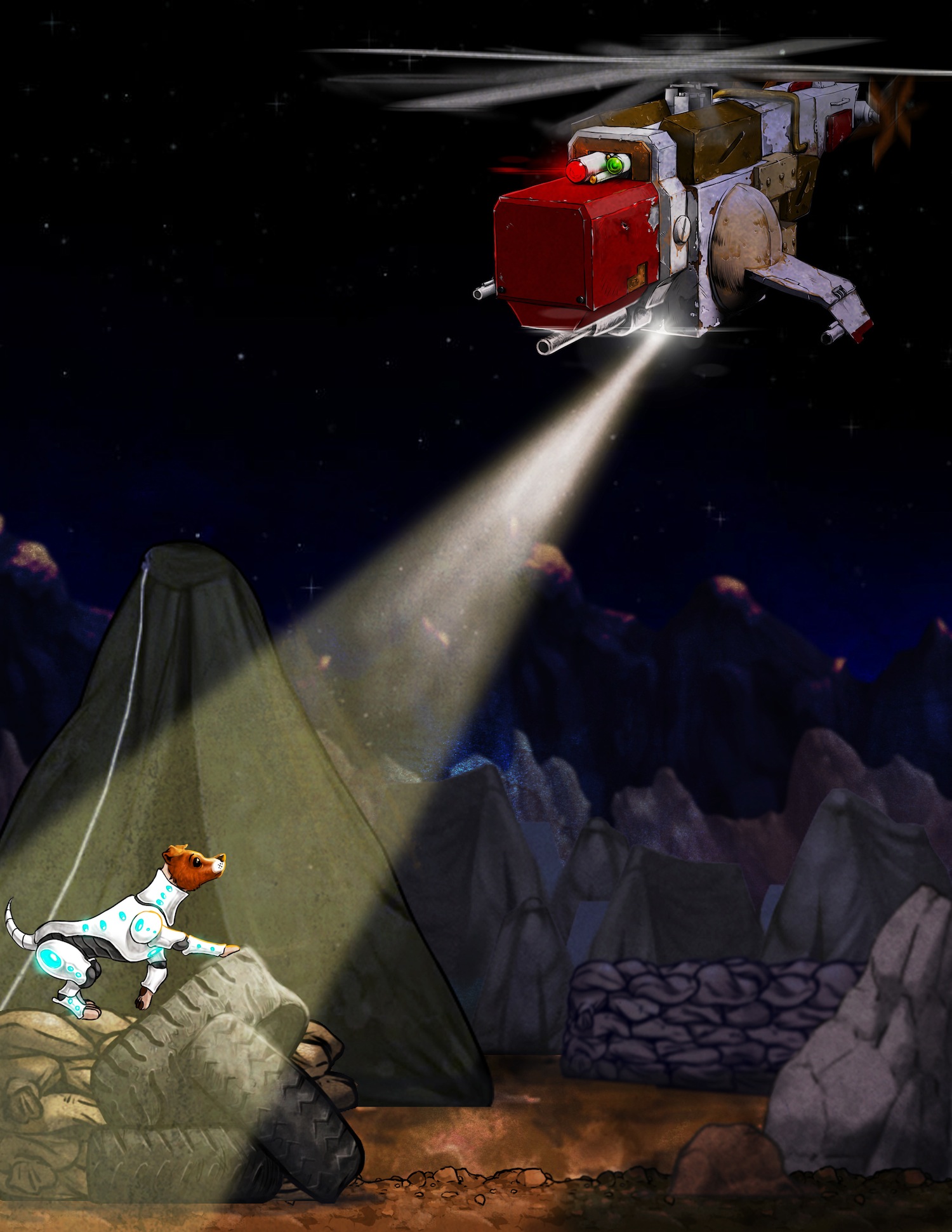 I relished playing The Sun at Night when I felt like I was making progress. There's a rich world here, and the game rewards exploration with extra nano batteries, ammo and other goodies. Tiny story details are tucked away in every alcove — notes left by soldiers and survivors and other observers of this bizarre world. I stopped to check everything out, and got pulled further into the fiction with every reveal.

There's a rich world here, and the game rewards exploration

The bizarre world had my attention throughout. The Sun at Night looks like it was inspired by a junior high-schooler's trapper keeper, with its garish cartoon aesthetic and population of heavily armed wildlife. But it also has something to say.

It takes on themes of suffering and adjustment during wartime in valid, subtle ways. In one early scene, I encountered a resistance soldier who carries his family's collection of dog-eared books, each with written notes or doodles from the deceased relative it once belonged to. He opted for their companionship long after his actual family had died. At another point, I came across a series of journals that detailed one family's escape from certain death from the military regime, complete with a son's recounting of his father's torture. It was almost shocking how affecting these little details were — and they drew me even further into The Sun at Night's universe.

I enjoyed losing myself in that world, but I spent much of that time lost. The 3D map looks nice, but it's incomprehensible — a mess of icons and 3D planes that make no sense translated to the game's actual 2D layout. I cycled through the same rooms over and over, hopeful for some clue where to go next. There's an auto-map option buried in the menu that provides some relief — an arrow icon that always points towards the correct door. But even that won't work for objectives that have no navigational data — and some of the main quest markers fall into that category.

The broken map functionality sucks a lot of fun out of the game, since exploring the environment and discovering new paths are keys to progressing. This combined with a number of crashes during my playthrough slowed The Sun at Night to a halt, ripping me right out of the world. 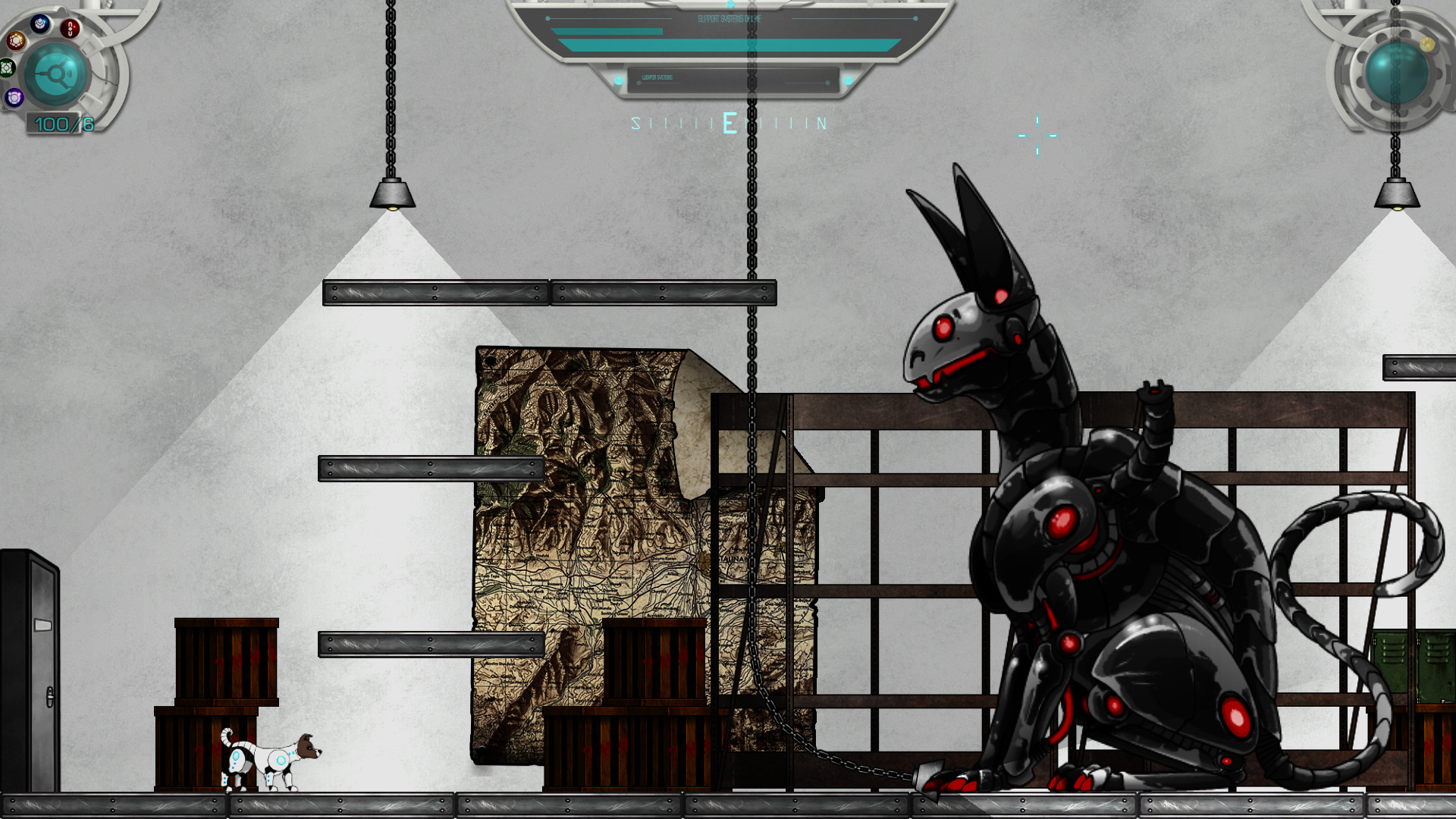 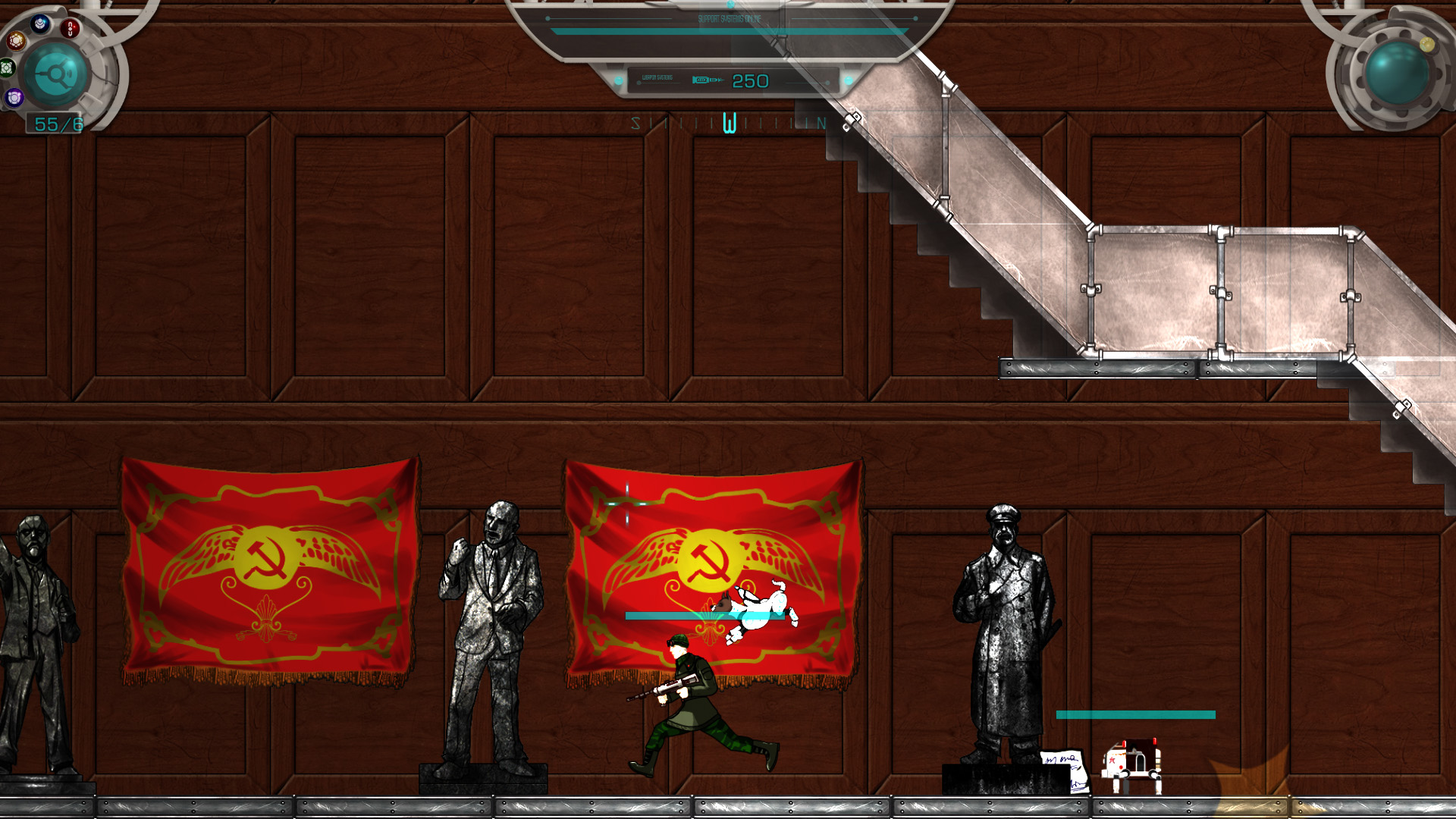 The Sun at Night's missteps make for a more difficult time finding the things Minicore does so well. It seems proud to be a certain kind of game — the bears with lasers kind — but also achieves something subtler, something more difficult, with a universe so apart from the norm that I couldn't help but want to dive deeper. In building an intriguing alternate world, The Sun at Night charms, despite its flaws.

The Sun at Night was reviewed using code provided by Minicore Studios. You can read more about Polygon's ethics policy here.