Infamous: Second Son puts its karmic choices on display, but still has some secrets

Share All sharing options for: Infamous: Second Son puts its karmic choices on display, but still has some secrets

The decision to be heroic, to use your superhuman powers for good, or to be a villainous destructive force and seek satisfaction by any means necessary will matter more than ever in Infamous: Second Son. The choices players make in Sucker Punch's PlayStation 4 debut as the young "Conduit" Delsin Rowe will have an impact not just on him, but on his superhuman gifts and the people around him.

The karmic choices in Infamous: Second Son, as in previous Infamous games, will lead its protagonist to decide at key moments whether to walk the path of good or evil. Stay on those paths and align your moment-to-moment actions to one or the other, and you'll be rewarded. Divert from the path and you'll be appropriately punished.

At a recent hands-on demo of Second Son, Sucker Punch showed that system in practice. Delsin, having just absorbed the neon-based powers of the character Fetch, another Conduit and a drug dealer-slaying vigilante, is given the option to redeem or corrupt her.

"What you do with that freedom is the player's choice," said game director Nate Fox. "You can either walk the high road and try to prove to people that Conduits are good; redeem Fetch and show her how to be that hero character.

"Or you can choose to be a jerk and corrupt her, you can turn her into a killer."

Sucker Punch opted for the latter, leading to a mission in which Delsin and Fetch harass and attack groups of anti-Conduit protesters. Their mission seems cruel, as the protesters are peaceful, if intolerant. But that didn't stop Sucker Punch from executing unarmed protesters and squads of soldiers from the Department of Unified Protection, or DUP.

As Delsin, the developer continued on its smoke and neon-infused superpower killing spree, doing great harm to the city and its civilians in pursuit of an anti-Conduit leader. By the end of that great mayhem, dozens were caught in the crossfire or intentionally killed. 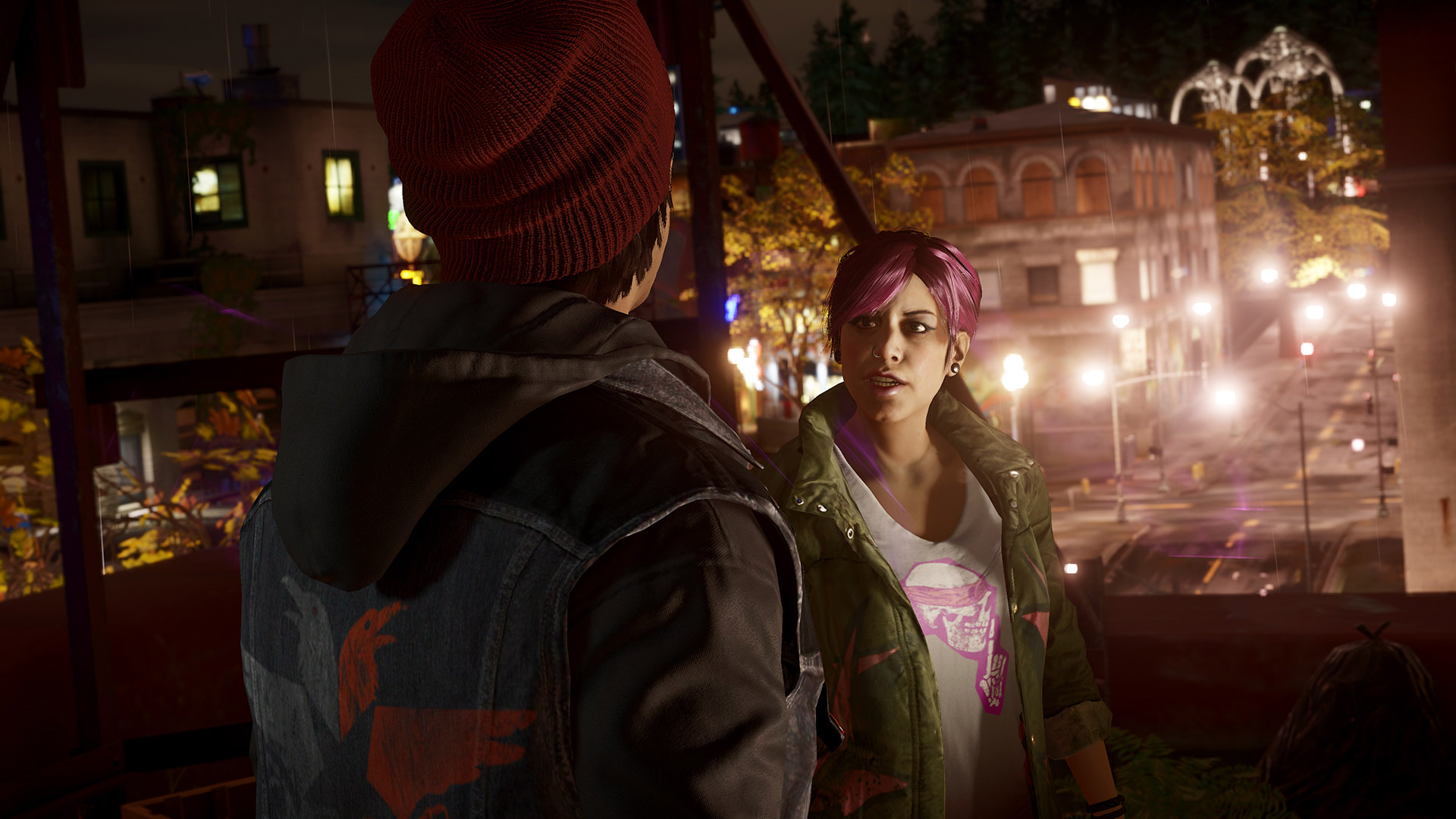 Later, playing as Delsin myself, I opted to redeem Fetch. Rather than encourage her dark side, Delsin took her under his wing, joining Fetch in her anti-drug trade crusade. We set off with the goal to destroy a group of houseboats suspected of serving as home to Seattle's illegal drug industry. The humans on the receiving end of Delsin's deadly powers were armed criminals, not Seattle's citizens.

That karmic choice was reflected in our mission, the dialogue between the two and the very fabric of Delsin's character. It manifested in fabric too; the dual birds silkscreened on Delsin's jacket reflect his karmic state, with the red bird dominating the white one when evil, vice versa when good.

Karma, Fox said, is also embedded into the game's combat itself.

"Delsin can choose whether he wants to obliterate enemies or take them down alive," he said. Players can opt for killing headshots by firing smoke or neon-based projectiles, or they can incapacitate foes by taking them out at the legs or through other non-lethal means.

"Your powers evolve differently based on whether you're a hero or villain," Fox said. "If you're a good guy, you get more surgical strike abilities to fight the enemy and avoid civilians. If you're bad, you get more indiscriminate powers, you're just all about mayhem."

Those decisions aren't doled out on a chapter by chapter basis either. They're constantly being assessed by your gameplay choices.

"We're charting what you do second-to-second," Fox said. "We're making sure that if you said you're going to try to be evil, you stick to it and keep up your mayhem levels. And if you're good we say, 'Hey, did you screw up and hurt somebody innocent?' and we zap you for it."

Evil Delsin is capable of some horrible things, but Fox said there are clearly explained reasons for his super-powered spree in Seattle.

"That's part of the story and in his head, he's completely justified in doing it," he said. "There's a total internal logic to it."

Delsin has ample destructive tools at his disposal. When using neon-based powers, he can fire quick bursts of glowing energy, lob stasis bombs that incapacitate foes, slice with a glowing sword and run at high speeds in short bursts, throwing enemies who are unlucky to stand in his path. His smoke-based powers share a superficially similar move set, swapping in a chain-like melee attack and a more destructive, burning grenade. Both powers have their own strengths and weaknesses, with smoke more useful in combat, neon better suited to quick traversal and movement.

At certain moments, Delsin can also perform what's called a Radiant Sweep, a screen-clearing super attack that Sucker Punch is still largely keeping under wraps. When we deployed a Radiant Sweep, in both neon and smoke flavors, an Infamous: Second Son logo obscured the more destructive moments.

"We're trying to save some of the more spectacular moments for our fans," the developer said.

That secrecy extends to Delsin's other powers, which, now just a little more than a month from release — the game comes to PlayStation 4 on March 21 — Sucker Punch still hasn't revealed.

"We're pretty cagey about showing things too early," Fox explained. "One of the biggest joys in video games is discovery and in a game that's just all about reveling in your super powers, we didn't want to show everything."

Fox said that the developer may have been guilty of revealing too much, too soon in past Infamous games.

"We thought [showing too much] was not the best idea in retrospect."