In a cashless society, child gamers are moving to digital currency

Share All sharing options for: In a cashless society, child gamers are moving to digital currency

As a child, in England in the 1970s, I would spend my pocket money on sweets and fizzy drinks. I'd also buy practical jokes, small toys, football cards; games and entertainment.

Kids today are no different. They spend half their allowances on junk food and pretty much all the rest on entertainment, often in the form of games or in-game items.

But the method of payment is where the world has really changed in the last few decades. When I was a kid, every last thing in my house, except the house itself, was bought with cash. We had no credit cards, no check books. My parents' wages were paid in brown envelopes containing banknotes.

Such a notion, today, seems quaint. Now, kids live in an era of digital money, in which the only way to buy things online is via electronic transfers. Yet only a fool would give a child access to plastic.

Parents, infamously, have been stitched up by content providers and even platform holders allowing children to make almost unlimited purchases of virtual goods. Most adults are figuring out how to block kids from buying stuff online, while companies are finally being reined in with much-needed regulations and penalties.

Enter Oink, a payment technology from Virtual Piggy. It's basically PayPal for kids. Parents create an account, and set a monthly limit. Kids can make purchases in online and real life stores using their digital account, or an Oink card. They cannot go over the limit set by parents.

Parents have access to an online log that shows exactly what is being bought. They can also block certain retailers. They can cancel or suspend the card at any time. This gives parents more oversight and control over their offsprings' purchases than if they were using cash. It limits exposure to expensive credit card mistakes. And it drastically cuts down on the pestering that goes on in all digital households.

"Say your kids come to you asking you to make a three dollar purchase online," said Oink CEO Dr. Jo Webber in an interview with Polygon. "If you could give them three dollars you probably would. But you have to give them a credit card and that just means a 'no'.

"Oink gives the kids a middle ground where they get to spend their own money in a way that is controlled and responsible. But the parents get the benefit of not having those conversations for every last purchase." 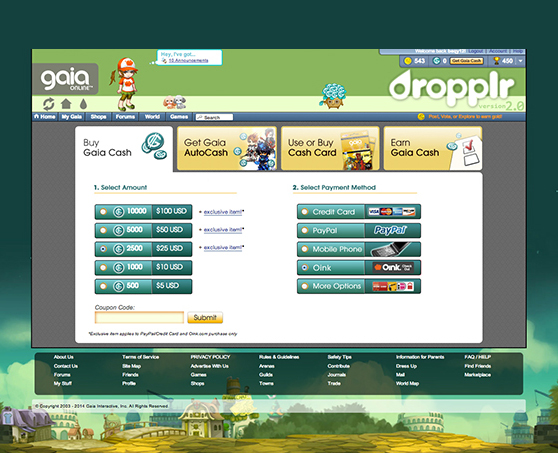 Oink has set up deals with games companies ranging from Habbo to Wargaming, which adds Oink to their list of acceptable payment options.

Gap, GameStop, Zappos, Toys R Us and Old Navy also take Oink. Webber said that she is talking to Sony and Microsoft. Apple, which swings its own way, is unlikely to come aboard.

Still, it's a boon for games companies that are marketing directly to kids, but who must rely on that conversation, in which child goes begging to parent to make the purchase. Webber said that the service, which is approved by the Federal Trade Commission, is something that kids are selling to parents.

"It took us a while to figure it out, but it's the kids who want this," she said. "They pick up the concept straight away. They explain it to the parents, not the other way around. They have the whole thing figured out."

A million people have signed up so far, which Webber said she expects to increase dramatically in the months ahead, as more retail partners are announced. Gaming is a high priority.

"People might go into a clothes store once every few months, and use Oink," she said. "But when they are playing a game they tend to make purchases a lot more regularly, making this especially useful."