Fable Anniversary is content to ignore too many old problems

Fable Anniversary has two difficult legacies to contend with.

2011's Halo Anniversary presented a lovingly touched up version of 2001's Halo: Combat Evolved. This introduced publisher Microsoft's branding for the trend of "HD remakes" — prettied up and improved versions of classic titles.

As Microsoft's other longest running action series, Fable seemed ripe for the same treatment. At the twilight of the Xbox 360, Lionhead has released Fable Anniversary, which, on paper, follows Halo's lead, giving the original Fable a wholly new visual presentation.

But there's a problem. Since Fable's debut on the original Xbox in 2004, Lionhead Studios has continued the series to varying degrees of critical acclaim, polishing the original formula and tempering their occasional surplus of ambition. None of that is evident in Fable Anniversary. The enhanced presentation isn't enough to paint over the fundamental problems that first appeared in 2004 — and that Lionhead hasn't fixed.

In premise and plot, Fable Anniversary is identical to the "director's cut" Fable: The Lost Chapters originally released on Xbox and later PC. You start the game as a young boy in a village who quickly loses his family and village to a violent attack. Saved by a member of the famous Heroes Guild, you're then guided quickly through your adolescence to become a full, card-holding member of the guild, responsible for hero'ing contracts, all while unraveling a growing mystery in the land of Albion.

Fable — and so, Fable Anniversary — is an action RPG light on stat tracking and heavy on actual play. You have attributes for strength, dexterity and magic, and using abilities tied to an attribute gives you bonus experience for its respective upgrades. There's not a lot of gear, and there aren't many weapons. It's all about easily-accessible combat and lots of little "moral" choices throughout the game that reflect on you, both in the way that citizens react to you and in your appearance. Be good, and you'll look it. Act a monster, appear a monster. 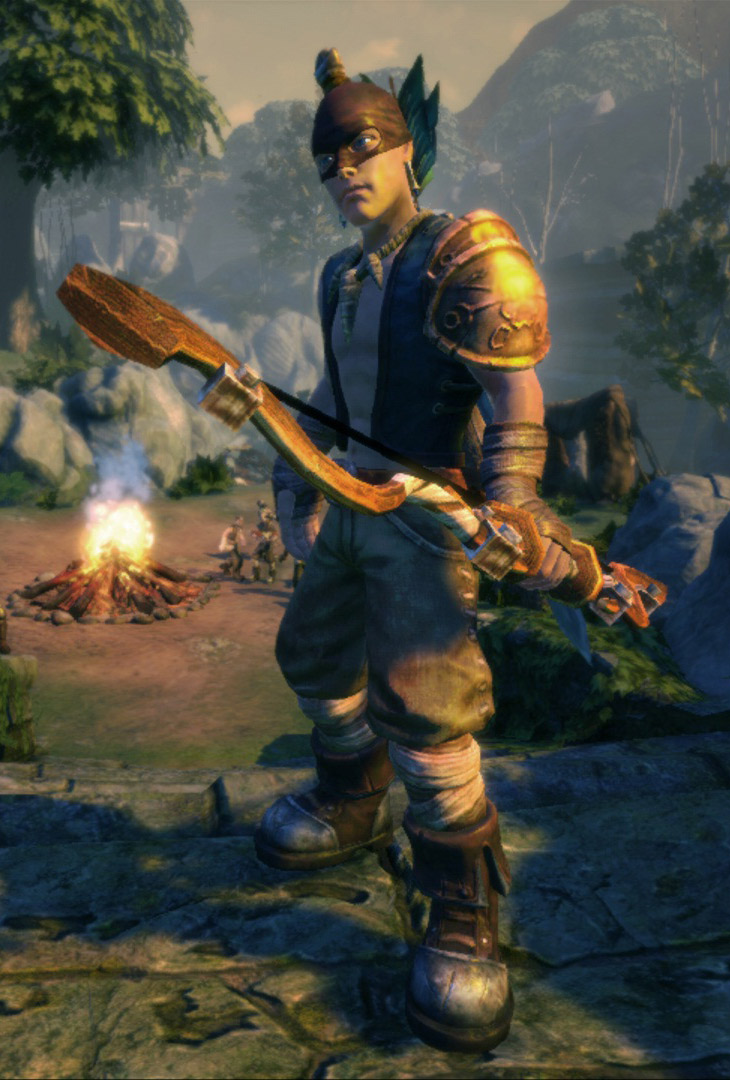 Act a monster, look a monster 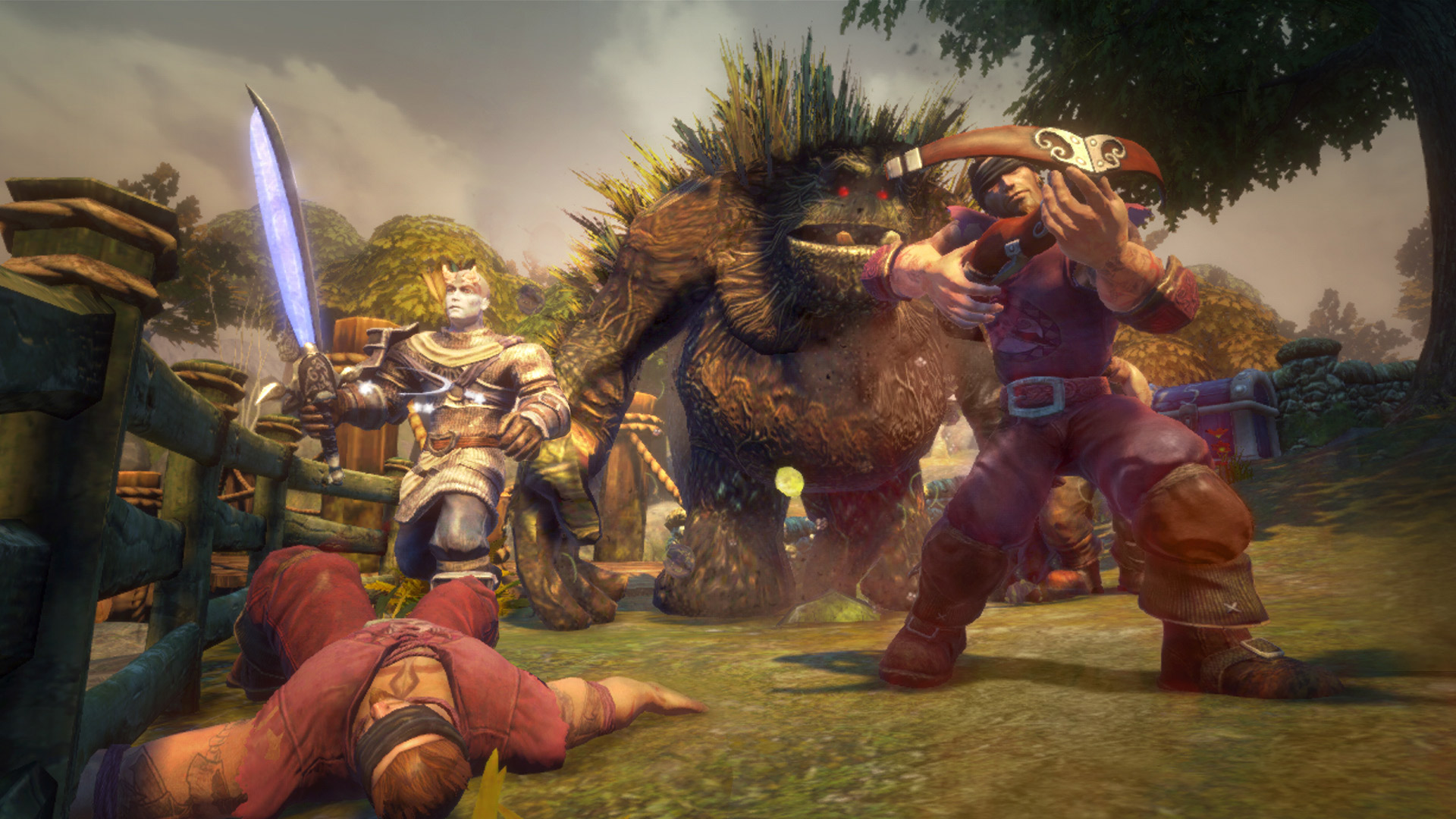 when it's working, Fable comes together quite unlike any other action RPG out there

You'll get chances to be a hero or a villain via jobs assigned at the Guild, which, strangely, include contracts to save the helpless and to prey on them as well. There are wrinkles to the job system, such as the ability to boast, which makes missions harder for a greater reward. Fable Anniversary is pretty straightforward. You'll get a job, you'll kill some things while potentially rescuing someone else, and you'll get paid.

It seems simple because it is simple, but when it's working, Fable Anniversary comes together quite unlike any other action RPG out there. Combat is mashy, but there's a rhythm to it, and leveling up different skills yields tangible (and often visible) benefits quickly. More than just about any of its contemporaries at release, or even now, Fable Anniversary is content to let you become just short of a walking god.

It's not complicated to accumulate massive amounts of experience quickly and level yourself well beyond the quests you can take at any given time. That it's still perfectly satisfying to clean up Albion's evil with little personal danger — or serve as a tyrant without peer — is a testament to the bizarre je ne sais quoi that Lionhead found with Fable.

This new Anniversary release takes all of that and provides with a comprehensive visual makeover. But that's just about the only thing it does. Fable Anniversary only serves to build a new façade on massive structural and technical problems.

Basic but critical elements of Fable Anniversary reflect the amount of progress made in this kind of title since the original's release in September of 2004. In so many ways, it's a only-somewhat playable mess, a collection of parts that feels less tightly sewn together than it did all those years ago. Take the camera, for example, which might charitably be called unfocused. It would more accurately be called wildly broken.

The camera is often wildly broken

Oh, sure, outside, where there are no walls for it to get stuck on, it functions. You can see things that are beyond your hero, and it can be coaxed to move where it should probably go. It's never good, but I was able to forget about it. But add a few trees to that environment, and things get complicated — it was difficult to position it reliably where I needed it to be. In caves or smaller structures, the camera can clip through the world or otherwise collide with it in a way that successfully harvested a volume of profanity my living room hasn't been witness to for months.

This was quickly surpassed by my colorful responses to Fable Anniversary's abysmal targeting system. The way it's supposed to work: a pull of the left trigger locks on to the nearest enemy, where your focus will stick — move left or right while holding the trigger and you'll remain attached to that target to shoot, stab, or spell at your leisure. This, it should be noted, would be fine, because when it does this, it does work fine.

number of times Fable Anniversary hardlocked during this review: 6

With one or two enemies, this wasn't really that big a deal. Towards the latter half of the game, as Fable Anniversary was throwing greater and greater numbers of enemies at me, it was rage-inducing. But even more galling is the horrific number of game-breaking bugs and system lock-ups that hang from Fable Anniversary's every surface and precipice — many of which are carried over from the original game.

This is not a typo or an exaggeration. Fatal quest problems from the original game that would halt progress and require, at best, a load of a much earlier save, have been preserved for this new release. Fable in 2004 was notorious for hardware crashes; in my time with Fable Anniversary for review, the game locked up my Xbox 360 six times. A simple Google search in the week since release reveals numerous users suffering from problems that Fable veterans recall from their initial playthroughs. In 2004. 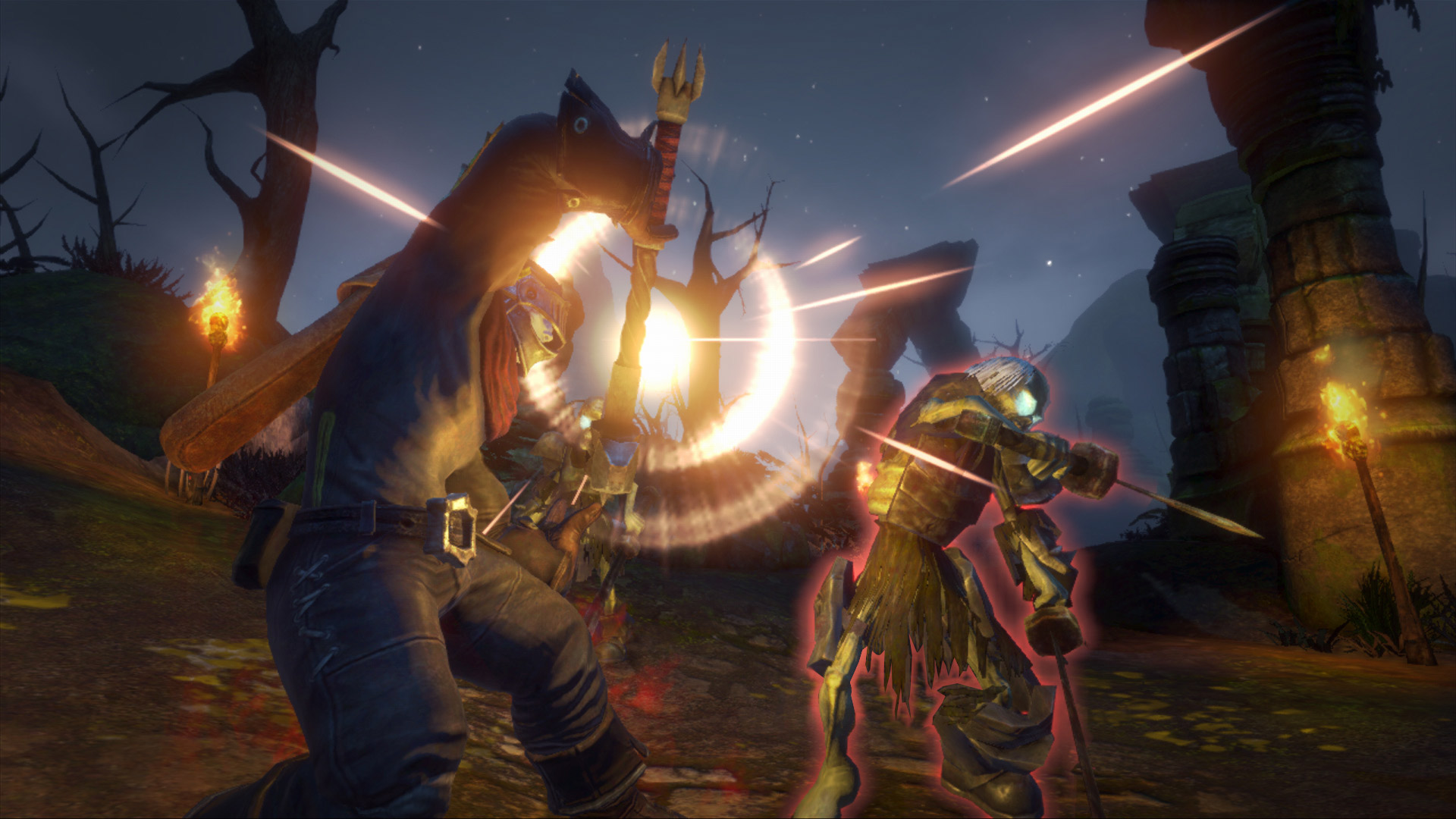 To be clear: Lionhead and Microsoft have released a game with known issues over a decade old without fixing them.

In 2004, these issues were offset by the ambition that shined through Fable's cracked exterior. The ability to marry (whether a man or a woman), the ability to become a murderer or a saint, the persistence of certain world elements — all of these things set Fable apart from the pack. Those things are still present in Fable Anniversary, but context has changed. And it hasn't been kind, new visual layer or no. Even here, there are problems: Fable Anniversary's performance is an embarrassment. The framerate drops precipitously and seemingly at random, making the series' traditionally soggy controls even less reliable.

Fable Anniversary is content to ignore too many old problems

These issues are so frustrating because of the bizarre, charming core that sits at the heart of the Fable series. If you could wade through the sometimes crippling issues present in Fable Anniversary, there's so much here worth exploring. But that's the thing. Lionhead themselves pushed forward into this territory much more successfully with Fable 2 and even Fable 3. This leaves Fable Anniversary a curiosity at best — and an infuriating disservice to the series' legacy at worst.