Naoki Yoshida looks tired, and it's no surprise why. "The dev team is working really hard, working without sleep, but we are smoothly progressing," he says.

Yoshida and his team have spent the last few years rebuilding Square Enix's disastrous MMO, Final Fantasy 14. Last year, they successfully relaunched as Final Fantasy 14: A Realm Reborn, a completely different and astoundingly better game. And since then, they've remained hard at work churning out fresh content and working on a PlayStation 4 version of the game.

"We had a very challenging time trying to relaunch Final Fantasy 14," Yoshida says, "and we don't want to forget the struggles we went through."

The more Yoshida talks about what he's achieved so far and what they have planned, the less tired he seems. He starts with the hard stats: 1.8 million players around the world, 6.7 million characters created, over 400 million hours played. It is, he says with certainty, "the largest MMO released out of Japan."

But where Yoshida really becomes animated is when he talks about the actual content. So far his team has released one major content update for Final Fantasy 14, and a second is coming soon.

These are massive updates too. The first included completely new housing and PvP systems in addition to end-game dungeons, added hard modes for existing content and more. The second update, planned to launch in March just before the PS4 version releases, will add another new dungeon, a new end-game primal boss fight and plenty of other small surprises.

"We plan to incorporate a lot of content with all future patches," Yoshida says. It's part of his plan to stay relevant as the series continues moving forward. "I'm sure there will be a Final Fantasy 15 and 16, but we will constantly try to bring in fresh, new material for Final Fantasy 14: A Realm Reborn."

As Final Fantasy 14 grows in size, Yoshida also wants to spread it to new locations around the world. Currently the game is available in English, Japanese, French and German, but Square is working on expanding support for new languages and new regions. Most notably, the game will be launching in China sometime this summer. After that, Yoshida says they're looking at launches in South Korea, Russia, Taiwan and the Middle East.

And, of course, they'll be expanding to a new platform as well: the PlayStation 4.

Beginning February 22, anyone who owns a PlayStation 4 will be able to download and participate in the Final Fantasy 14 beta. Characters from the beta's second phase in April, will even stick around if you move over to the final game. Square has also worked out a deal where Final Fantasy 14 will not require a PlayStation Plus subscription to play online. They're hoping to draw a lot of interest from the new console's growing playerbase.

While the PC version of Final Fantasy 14: A Realm Reborn was largely stable on mid-level PCs, the PlayStation 3 port had some problems with framerate drops and downgraded visuals. The PlayStation 4 version fixes all of these issues. The framerate has been stabilized, the game runs at a full 1080p resolution, and some major interface changes — such as the ability to use the PS4 controller's touchpad to control a makeshift mouse pointer — make the game even more console-friendly.

It's also more open than ever to how you want to play it. Want to play on PS4 but use a full mouse and keyboard setup? Not a problem. Yoshida says any gaming input devices that don't require a special driver to work should be usable. They've also worked to optimize the PS4 version of the game for remote play on the PlayStation Vita, so if you want to grind out some levels while lying in bed, it should be possible. 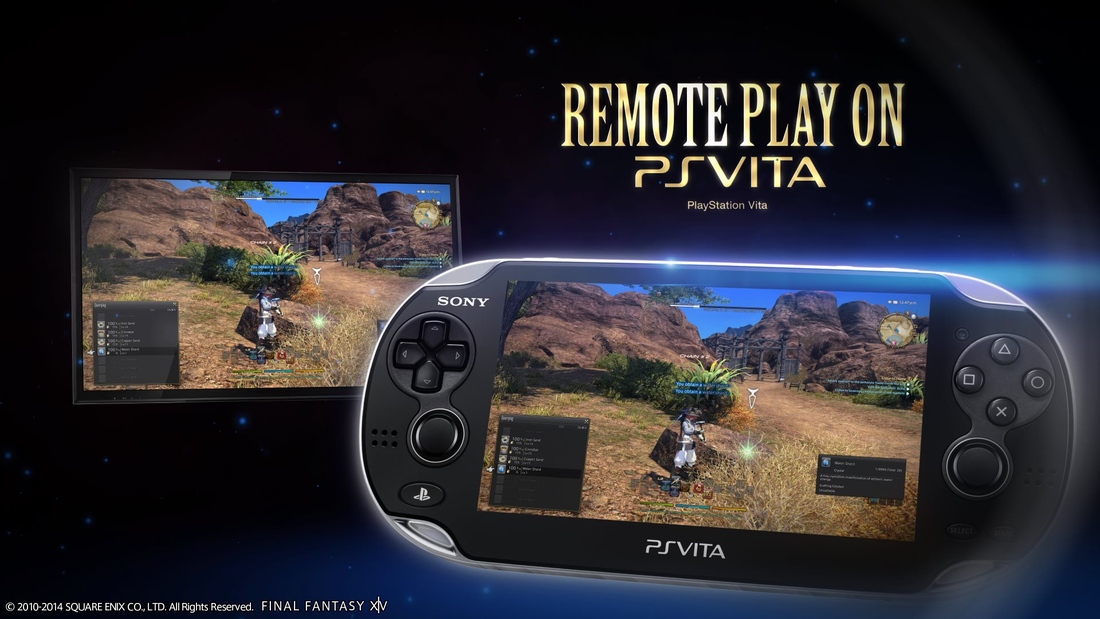 It sounds crazy, but Final Fantasy 14 on Vita via remote play actually works. The interface is a little tiny and difficult to read, but you can scale it up when necessary. From my short time testing it, I wouldn't want to use the Vita functionality during intense raids or difficult boss fights, but for chill nights where I'm doing some crafting or mining? It's brilliant.

And that's not to downplay how impressed I was with the PlayStation 4 version itself. The touchpad adds just enough room for preciseness to make using a controller in Final Fantasy 14 an even better experience. The game looks on par with a high-end PC, and performance seems similar. I wasn't able to play in a big group, but I ran through several zones, and even when there were multiple characters and enemies with spell effects going off, the game didn't seem to slow down.

With two months yet until Final Fantasy 14: A Realm Reborn's April 14 launch on PlayStation 4, it seems likely that Yoshida will be able to add another victory to his huge list of accomplishments with this once-doomed project. But he isn't ready to celebrate yet.

"The feeling hasn't settled in yet that I've actually accomplished something," he admits. "We're still constantly developing patches and upgrades that we feel are very important. We're still going full throttle. I'm not sure I'll get the realization that this has actually launched until maybe the first expansion."

An expansion, he says, that will have "the [same] amount of content released with the relaunch."

"If this was Rocky, and I was in a fighting match, once I knock out the opponent, I could cheer. But that's not really the case for an MMO. We've got to keep going."