MLB 14 The Show comes home in May for PS4, April for PS3 and Vita

Share All sharing options for: MLB 14 The Show comes home in May for PS4, April for PS3 and Vita

This year's edition of baseball sim MLB The Show will arrive a bit later than it traditionally has, the game's developer announced this week. The PlayStation 3 and PlayStation Vita versions of the game are coming April 1, while the PlayStation 4 version of MLB 14 The Show is expected sometime in May.

That slight delay — the games normally bow in early March — can be chalked up to developer Sony San Diego working to get all three versions of the game at parity, community manager Ramone Russell said. Rather than deliver PS3 and PS Vita versions that were more feature-rich than the PS4 version, the San Diego studio opted for a later release date, after the Major League Baseball season has officially started.

The PS4 version of the game, in addition to being at parity feature-wise, will bring with it many graphical upgrades: a new lighting engine, more detailed hair for players and 30 baseball stadiums "built from the ground up" to take advantage of the PS4's processing power. Better, more diversely populated crowds, rendered field grass and other visual improvements evident in a side-by-side comparison of the two console versions make the new-generation version stand out.

The developer promises more than 1,000 different crowd models, each composed of more than 10,000 polygons on PS4. Each stadium, Sony says, features more than a million polygons for more authentic detail. And it will all run at 1080p resolution and at 60 frames per second.

All versions of MLB 14 The Show will include a slew of new features, Russell said, some of which focus on giving players the option to play full games faster.

"One of the biggest complaints that we hear is that it takes too long to play a game," Russell said, explaining that an average game of The Show takes about 90 minutes to play, longer than your typical sports video game. With MLB 14, Sony San Diego aims to give players "quicker, more engaging experiences with less time commitment."

"We've totally redone presentations," Russell said, saying the developer is looking to trim some of the game's fat for the sake of speed. "If no one's talking and nothing's going on, we cut right back to gameplay."

Using a new feature, Quick Counts, the developer says players will be able to play a full nine innings in less than 30 minutes. With Quick Counts, the game automatically generates pitch counts, the number of balls and strikes, based on two years of historical MLB data. Players are put into a batting situation and may have one or two pitches to play. In a demonstration, Russell played through a couple of innings in under a minute using Quick Counts.

Another feature, Player Lock (or Road to the Show anywhere), lets MLB 14 The Show players lock into a single baseball player and only control him. Player Lock can be used in exhibition games, franchise modes, wherever, and players can turn the option off at any time.

This year's The Show will also introduce year-to-year saves, meaning your 2014 save data for Franchise mode and Road to the Show will carry over to future games. 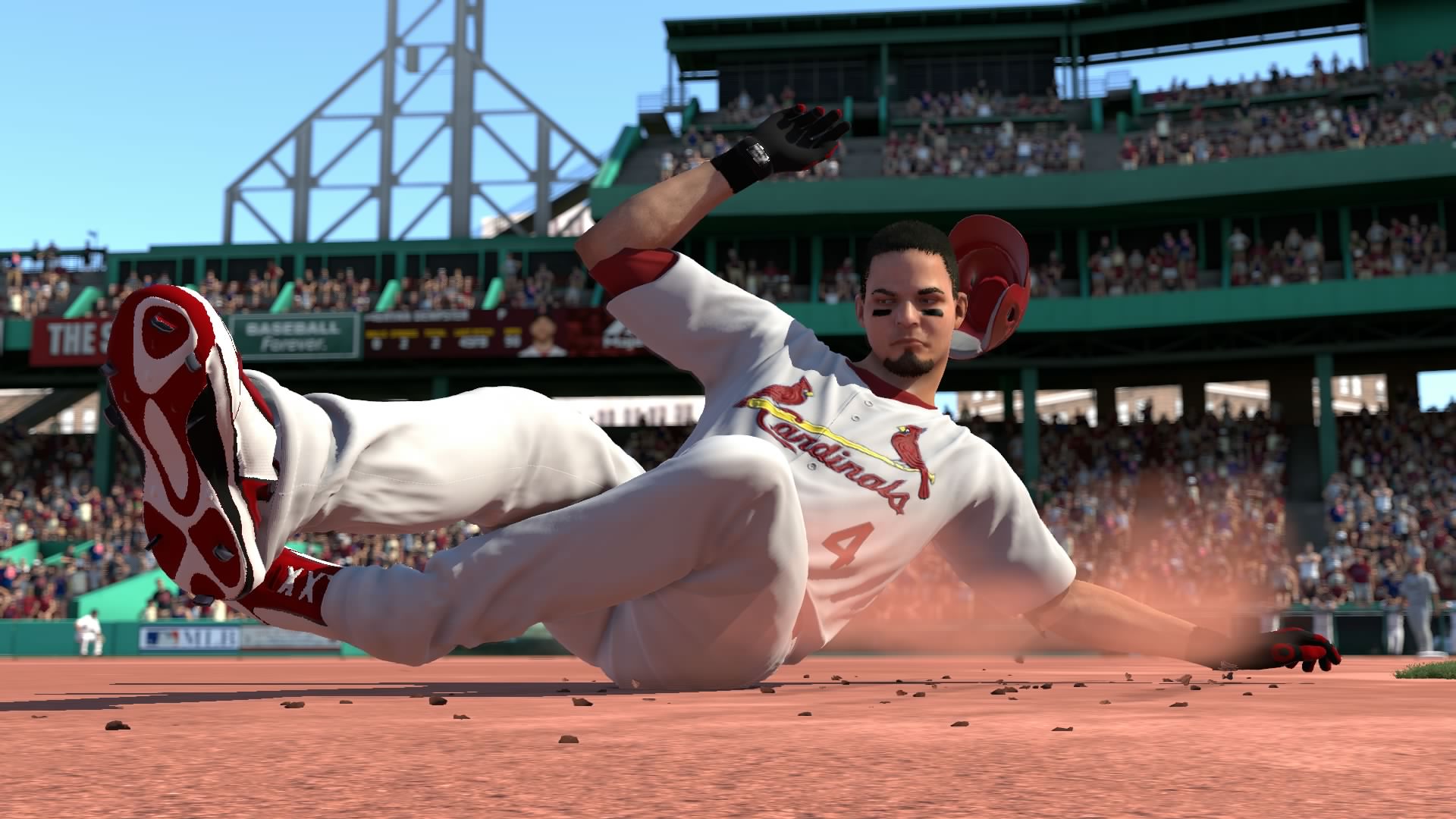 Another way in which MLB 14 players on PS3 and PS4 will be able to get in and out of games more quickly is the new Community Challenges mode. It allows players to set up unique game scenarios by customizing elements such as the inning, score and runners on base, and then set some goals for the situation. Players can upload these challenges to the web for others to try — for instance, a challenge could be designed for people to relive, or rewrite, a particular instance of baseball history.

MLB 14 on PS3 and PS4 will also mark the debut of a long-requested feature: Online Franchise. According to Sony San Diego, "most of the features from the offline version," including scouting, the amateur draft, free agency and trades made by the CPU, will make the transition. The studio didn't provide more details on the feature set, but Online Franchise will give league commissioners customization options such as changing scheduling, rearranging divisions and altering the number of playoff spots available.

Sony San Diego is expanding the Diamond Dynasty mode, in which you put together a fictional team, with a feature the studio calls Extra Innings on PS3 and PS4. When playing online, people can challenge other user-created teams in an offline game in order to earn bonus rewards.

It's unclear if that will be tied to Stubs, a new in-game reward system. By playing MLB 14 games in any mode, users can earn Stubs and use them to buy add-on content like training points in Road to the Show. Stubs are the "Universal Currency" that people have seen in pre-order information for MLB 14. Russell said, "It's not what people are afraid of" — a microtransaction that could change the way players progress through modes — and added that if players didn't spend real money in MLB 13 last year, they won't feel the need to do so this year.

Sony promises that more details and a playable version of the game, which Russell said the San Diego team is in the near-final stages of tuning, will be available in the coming weeks.

Samit Sarkar contributed to this report.

Update: Here's a trailer for the PS3 version of MLB 14 The Show.