Hashtag Dungeon, an upcoming roguelike from developers Kieran Hicks and Sean Oxspring, will give players the power to generate their own levels with the help of Twitter.

Described as a game reminiscent of The Binding of Isaac and The Legend of Zelda, Hashtag Dungeon is a top-down bullet hell roguelike that challenges players to clear every room in a dungeon before taking down a final boss. Players will have the option to play already existing dungeons — which are selectable from a list of the most current — or create their own.

By tweeting code tagged as #HashtagDungeon, players can add new content in the form of rooms filled with monsters, traps and more. Speaking with Polygon via email, Oxspring said that all tagged tweets will be automatically updated within the game "in the same way that a Twitter stream on a website would be."

"This means that next time you play the game there may be totally new rooms and areas to explore," Oxspring said. "We've developed a system where players are able to create tweets that represent a particular room inside a dungeon.

"Players are able to create tweets that represent a particular room inside a dungeon."

"We've looked at several methods to ensure dungeon rooms are functional, including limiting the total number of things that can spawn in any room (rooms that are further from the start can have more enemies and stuff than those close to the player start...) and having objects snap to a grid based system."

For those a little less code savvy, Hashtag Dungeon will also include an in-game editor mode. Using the editor, players can build rooms by dragging and dropping whatever elements they wish and then tweeting out the results.

"This will then take them to Twitter and let them post the tweet without them having to type it out themselves," Oxspring said. "We think this is a nice way for more casual players to become dungeon masters."

The developer duo wants to keep the game interesting for coders, however, and will also allow players to build their own rooms from the ground up.

"We're planning on having a few items and enemies that can only be summoned by those dungeon masters that dare to play around with their tweet's code," Oxspring said. 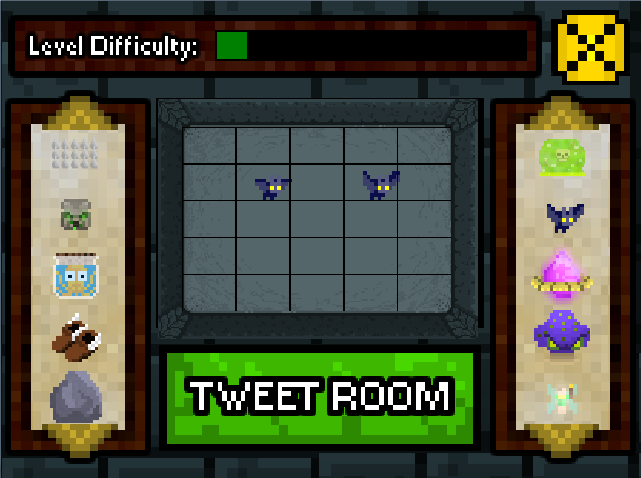 #Dungeon is being developed for Android devices and Windows PC with an estimated release for this summer. The game is currently being tested as part of Hicks' final year project at university. According to Oxspring, the duo plans to continue releasing regular updates for the game once it launches.

"We'd really like to see a community grow up around the game of both Dungeon Masters and Dungeoneers," Oxspring said.

"If we see something awesome being made by someone in the game, we'll try and make it easier for them to keep improving on it. We are trying to foster player creativity whilst keeping the tools available to players accessible."