Donkey Kong Country: Tropical Freeze got my blood up. Sure, it looks like a kid's game, and I looked ridiculous, as a grown woman telling an oversized cartoon owl to go fuck himself. But I couldn't help it — Tropical Freeze is the kind of difficult, addicting experience that inspires passion. And salty language.

It takes everything that worked about 2010's Donkey Kong Country Returns — incredible level design, a breakneck pace and heaps of Donkey Kong nostalgia — and adds elegant new features where appropriate. The result is a colorful, challenging platformer that kept me engaged even when the difficulty level spiked over my head.

Retro Studios' latest is all about running, jumping and barrel-blasting across a series of themed worlds, each with standard stages, bonus levels and a boss fight to cap it off. You play as signature ape Donkey Kong, who can team up with Diddy, Dixie or Cranky Kong, who will ride on Donkey's back and add their signature power to his. Or, you can play co-op, where player two has direct control of the other Kong. Diddy has a jetpack that allows you to extend jumps, Dixie allows you to hover and get extra height out of a jump, and cranky has a pogo-stick double jump off platforms and enemies. All of these abilities are useful — and crucial to reaching secret areas.

While you can play each stage straight — just surviving until the end — you can also opt to explore and seek out extras. Each stage has something worthwhile — K-O-N-G letters to collect and secret puzzle pieces, and some even feature hidden exits. Tropical Freeze always made me feel like my efforts were worth it, rewarding my diligence with secret levels and other bonus content. And I found myself compulsively going back to explore and complete earlier stages.

Playing these stages is its own reward, with imaginative layouts that had me catapulting through mountains, exploring exotic underwater caverns and bouncing through levels that can only be described as a loving homage to The Lion King. It fits perfectly — the Donkey Kong Country games have never been about restraint, in their aesthetic or gameplay. They're built around a philosophy of gleeful excess — adding weird new enemies or crazy platforming features with every level. Retro gets the balance right, offering surprise and challenge with every stage. 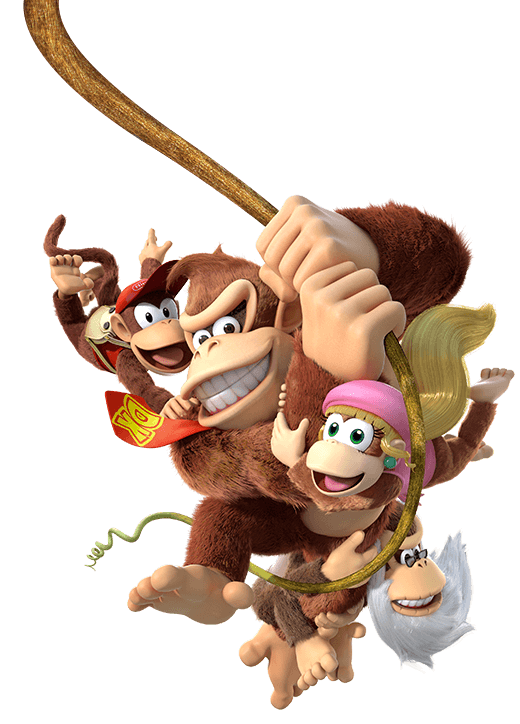 In one early example, a runaway minecart stage (a series staple), turned into a crazed log flume, and back again. In another stage, I needed to throw water balloons to cool a series of flaming vines over a burning savannah. In another, I had to explore a submerged temple while navigating a treacherous current and avoiding electric eels. This consistent focus on new and interesting features lends Tropical Freeze the best level design in the series. It's smart — adding new obstacles at a steady pace that kept me on my toes, and kept the challenge level tough-but-fair.

This is crucial, since Tropical Freeze gets very difficult. Later stages had me rigid with attention, as one tiny miscalculation meant certain death. And I died hundreds of times throughout my playthrough, mostly during boss fights that ramp up in difficulty radically after the first world. It got frustrating, hence all my screaming at cartoon monkeys.

Later stages had me rigid with attention

Tropical Freeze allows you to mitigate some of that difficulty through a well-implemented inventory system. In each world, you have the opportunity to buy items — extra lives, an extra heart container, a balloon that saves you from one pitfall, etc. This is a far better solution than the previous game's "super kong" system, where the game played itself over a difficult stage — an option that popped up if you died enough times.

I often found that playing with a partner was the best way to go when I ran into trouble. With two characters navigating the chaos of any given stage, there's a better chance that one of you will make it — at least, until the next checkpoint. 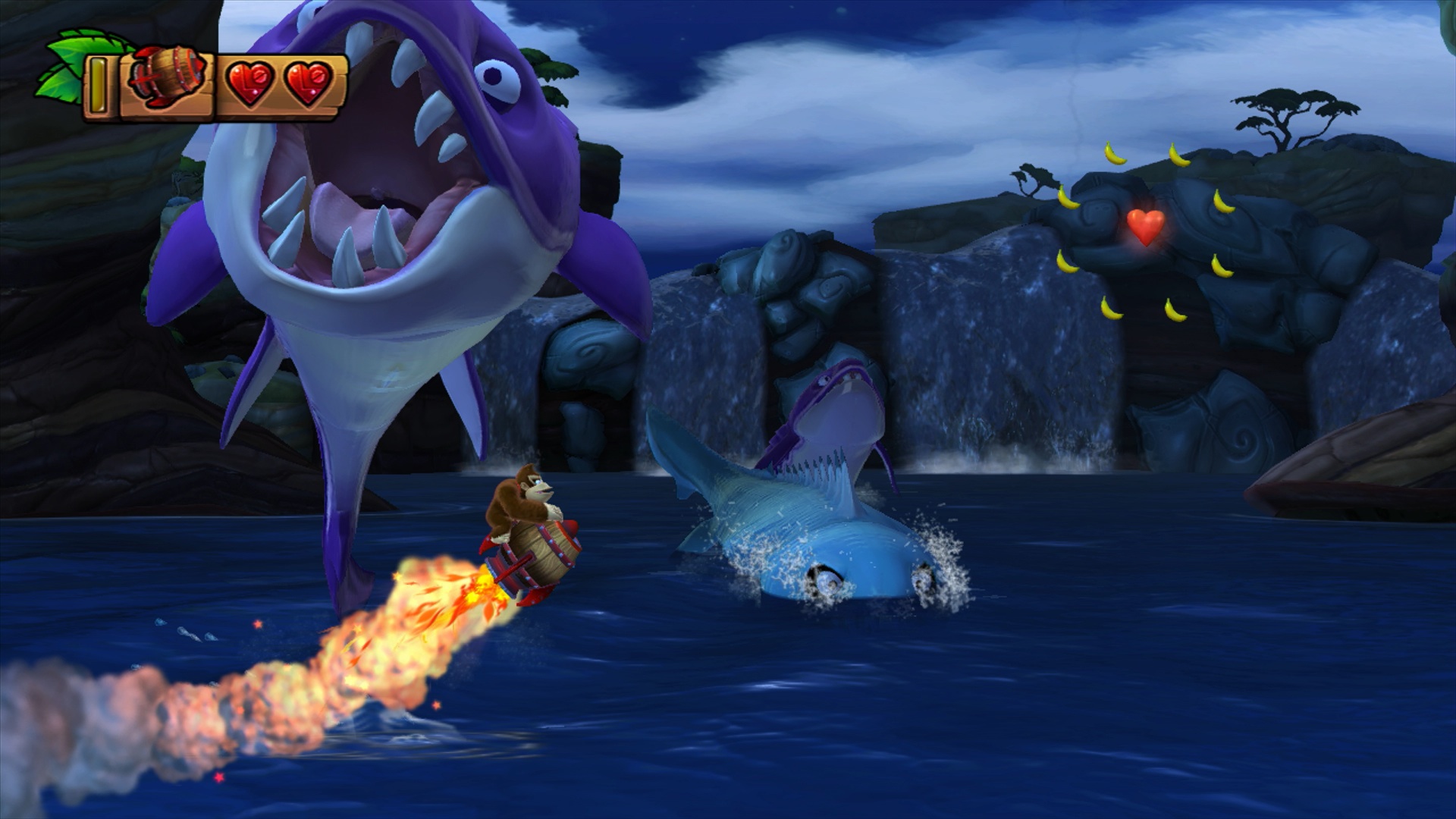 Tropical Freeze has the best cast of Kongs to date, with Diddy, Dixie and Cranky on the roster. I almost always opted for Dixie, who is playable here for the first time since 1996, since her special jump ability let me go further than I could with any other combination. She's a rare — and fabulous — female playable character, and like Princess Peach in the Mario series, she's finally getting her due again. I only wish the game would allow me to play as her (not as a combination of her and Donkey) in single player mode.

Co-op play in Tropical Freeze elevates the game to a fine, chaotic art. In single player, the game is balanced between sections that require you to hightail it, and others that force you to take careful, considered moves in order to progress. Each of these elements feels heightened — and more fun — when there are two Kongs on the screen. My co-op partner and I were routinely — and happily — shrieking at the screen, taking on bosses, flying by the seat of our pants on runaway mine carts and generally having an amazing time.

There are occasional issues, however. I spawned over a pit a couple of times, resulting in a frustrating instant death. And the camera in Tropical Freeze isn't as responsive as it is in other multiplayer platformers — which is key in a game that moves this quickly. Several times, one Kong would fall behind and die before they could warp to the lead character, which cost us the level. 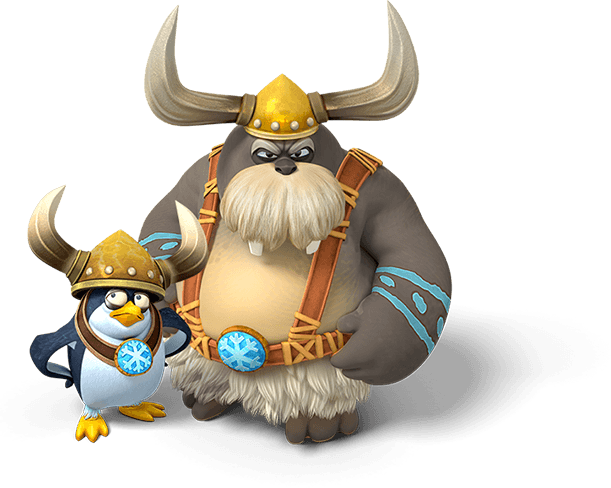 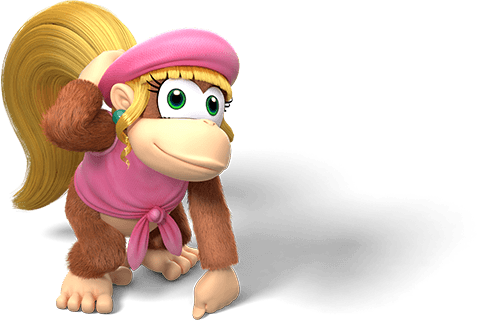 It's worth the occasional headache to experience this game with a buddy. But the hiccups stuck out in a game that is otherwise so polished.

That polish extends to the game's aesthetic. Tropical Freeze's world is lush, with vibrant colors and rich environmental detail. And the music is fantastic, much of it rearranged from the classic Donkey Kong Country games that had me — as a fan of the older games — humming along. Even the enemies are oddly beautiful. They're a mix of viking-themed cold-weather creatures that make for far more interesting fodder than the generic tropical animals and Tiki gods of the previous game.

Donkey Kong Country: Tropical Freeze could've easily been a me-too sequel. Its much-loved predecessor reinvigorated the series and did so much with the 2D framework that Retro could've released a bunch of new stages and called it a day. But Tropical Freeze adds intelligently to the formula, with new characters that imbue subtle nuance to the gameplay, a better-tuned challenge level and an increased emphasis on replay value. These features make Tropical Freeze consistently worth coming back to, and mark it as a high point for the series.

About Polygon's Reviews
8.5 Wii U