Share All sharing options for: Killer Queen's creators on the struggle of bringing indie games to arcades

Local multiplayer games are back in vogue these days, with a groundswell of excitement forming around indie titles such as Matt Thorson's TowerFall and Beau Blyth's Samurai Gunn. One game that particularly embodies that spirit is Killer Queen, the competitive and cooperative 2D platformer from designers Nikita Mikros and Joshua DeBonis. Mikros (above right) and DeBonis (left) are trying to turn their video game into a salable product for arcades, but as they explained during a half-hour talk at IndieCade East 2014 last Friday, they're running into some unique challenges.

Mikros and DeBonis built the original cabinet for Killer Queen themselves for about $5,000 over the course of several weeks in early 2013. (For more on the game and that cabinet, check out our feature on the game's origins from last August.) It was a lot of work, but they wanted to build more so more people would have the opportunity to play Killer Queen.

Then they were approached by Wisconsin-based Fun Company, which constructs cabinets for Namco and many other producers of arcade games. It turned out that Fun Company would be able to build higher-quality Killer Queen machines for about the same amount that it cost DeBonis and Mikros, and of course, that would be much less work for the developers.

"[Fun Company] helped us balance our vision of the game with the practical constraints of manufacturing, including costs, building something that's reliable and sturdy, and something that can be secure enough to be in a public space," said DeBonis. "And also managing practical matters of working with arcades, like fitting through a 30-inch door." 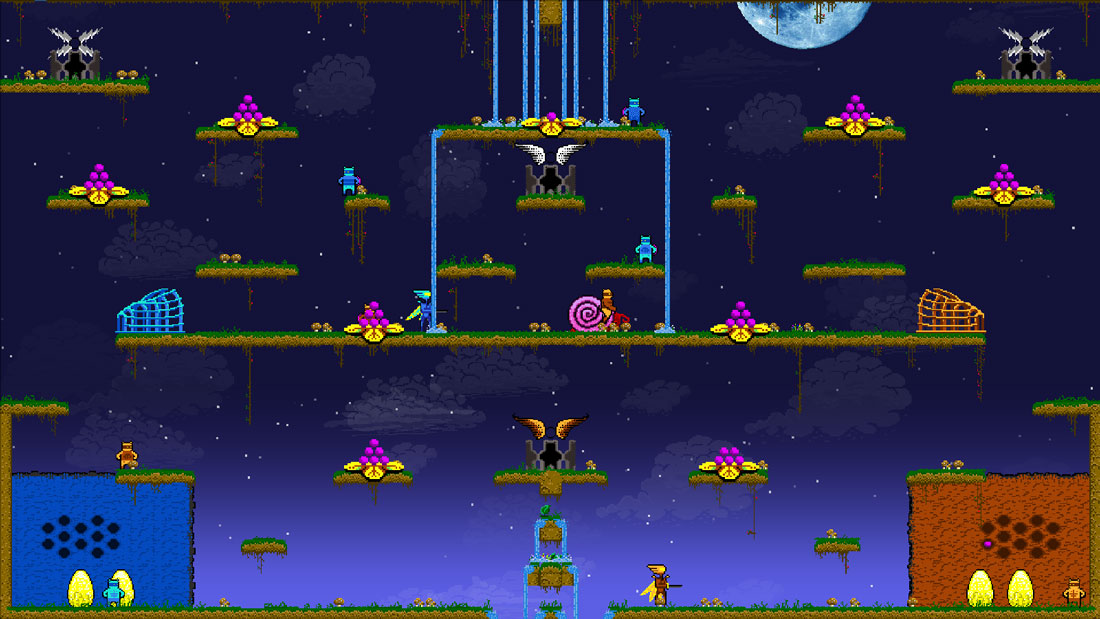 That's just one consideration when it comes to making arcade cabinets. "We've learned that the arcade business is very, very different than the downloadable video game business that we're used to most of the time. There's a lot of challenges specific to arcades, and even more specific [ones] with our game, because it's so large," DeBonis added.

Arcades have limited space, and owners tend to use all of it. So they usually have to get rid of existing machines if they want to bring in new ones. The cabinet for Killer Queen — which is a five-on-five game with two back-to-back screens — occupies as much space as four standard-size machines. That makes arcade owners reluctant to take a risk on an unproven game like this one.

The payment structure is a challenge, too. In most arcade games, even multiplayer ones, each person pays a fee and players who are successful can keep going — that's how it works in fighting games, for example. Figuring out monetization is key because in the arcade world, it determines the cost of a machine: The sticker price usually corresponds to a cabinet's annual revenue.

Mikros and DeBonis have been running some tests at a Q-ZAR location outside San Francisco for the past month. They charged $2.50 per game (for all 10 players, not each) for two weeks, and Killer Queen made about $40 per week. When they lowered the price to $1 per game, the revenue doubled to $80. That's on par with the House of the Dead 4 machine at that Q-ZAR, which is an average-performing cabinet for that arcade. The equivalence generated applause from the audience at the IndieCade lecture, but the developers quickly explained that they were actually disappointed with the figure.

"We feel [that] is maybe not that good, considering our game is newer and about twice as large as [House of the Dead 4]," said DeBonis. Mikros added, "We're basically struggling with the idea now of, like, 'Why are we competing with House of the Dead 4?'"

"Why are we competing with House of the Dead 4?"

It's a difficult problem to solve, and DeBonis said he and Mikros are still experimenting with pricing. And even once they actually make a sale, location is a challenge: The Killer Queen cabinet is so big and bulky that many owners can only put it in "crappy locations," according to Mikros. "It's, like, sitting by the bathrooms, and you basically have to look for it to find it."

In all respects, the two of them pointed out, Killer Queen represents something very new for arcades. The game has gotten a great reception at previous showings, such as its debut at New York University's "No Quarter" exhibition last May and its appearance in the ongoing "Indie Essentials" exhibit at New York's Museum of the Moving Image. But Mikros and DeBonis have some obstacles to overcome if they're going to make it a successful product.

"We're basically changing the paradigm," said Mikros. "We're taking a paradigm of air hockey, and trying to apply it to video games."