Strider takes the best parts of its lineage to heart

Strider manages to balance a sense of its history with the push for modernization.

Capcom released a pair of Strider games in 1989. The first was a more traditional arcade beat-em-up, a linear but beautiful bit of hardcore action tooled to eat as many quarters as possible. A few months later, the Nintendo Entertainment System saw a companion game with the same premise but considerably expanded scope, an action-adventure game similar in many ways to games like Simon's Quest or the original Metroid.

Now Capcom has collaborated with western developer Double Helix to bring the series up to date on current and next-gen consoles. At first blush, Double Helix's Strider plays and feels like the techno-ninja that gamers sacrificed quarters to play, flashy crescent-laser of a sword slicing through robot nightmares from a pseudo-Soviet power.

But this new Strider takes a smart page from a different branch of the family tree. The result is a sprawling action-adventure game that successfully captures and updates the ambitions of its 8-bit ancestor. And there are only a few cheap boss fights to dampen the experience.

First impressions paint Double Helix's new Strider with a decidedly arcade-styled brush. Main character Hiryu practically gallops across the world, climbing walls and ceilings. His jumps can be shifted mid-air, with the series' trademark cartwheel in place. There's an action-oriented bent toward the controls.

But this new Strider isn't linear. Instead, Hiryu's new adventure takes place across a massive world of interconnected zones, similarly to the series' NES debut. At first, that world seems seductively open. Strider begins with considerably more player agency and ability than other exploration-based games, and the speed and finesse on display made it a joy to just ... sort of ... run around.

It's a joy in Strider to just sort of run around

Strider nails the basic second-to-second thrill of being that ultimate ninja badass, bouncing around, climbing walls, and making very short work of the enemies that fill its constructivist structures and hallways. Even mini-boss characters introduced in quick cutscenes are only doted upon long enough for you to learn their tricks and weaknesses — in short order I was destroying them as efficiently as everyone else.

This power went to my head, and I fearlessly bounded from place to place. I found it irresistible to go the wrong way almost all the time, and Strider rewards enterprising players with secret rooms and hidden areas. But Double Helix also quickly establishes a hierarchy of access, gating new sections of the world to specific abilities you can only acquire by defeating boss enemies scattered throughout.

These bosses introduce some of the only frustration that Strider thrust upon me. 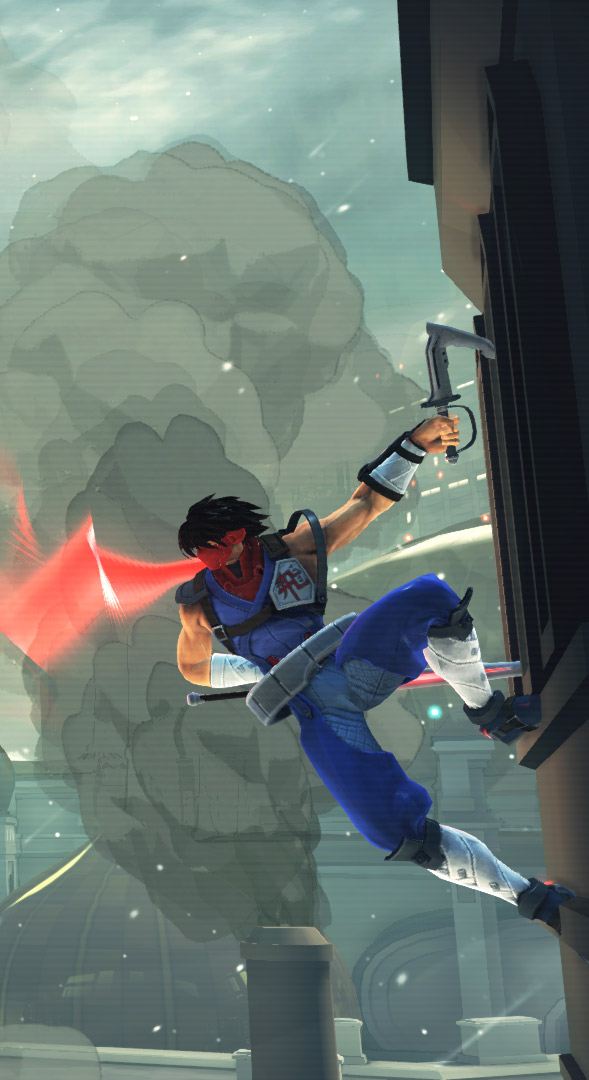 I wouldn't say Strider is easy — Hiryu's mobility and speed are necessary tools against an almost overwhelming wall of robots and bullets. But that dynamic — the one against a thousand odds — is thrilling and empowering once you learn to harness that boundless ninja momentum. And none of those normal enemies will wipe you out quickly enough for things to feel unfair.

But Strider's bosses are a different story altogether. Each has a series of specific attack patterns that I needed to learn to beat them. But each also has a variety of energy weapon attacks that will knock you down, and for whatever reason, Hiryu remains vulnerable to damage and attacks while on the ground. This led to a number of points where I'd be subjected to sustained damage while immobilized. It was infuriating, and there may have been profanity involved.

Ultimately, this momentary frustration drifts away (until the next time). There's a deep sense of accomplishment in learning the patterns for each boss and taking them out — and these fights also served as a re-education in the breadth of tactical considerations available to me at any given moment.

Strider forced me to constantly re-evaluate my combat strategy. Upon entering a new area, you might find enemies who are functionally immune to your current arsenal, necessitating flight instead of engagement. In this way, enemies can be as gated as sections of the map — making it all the sweeter when I came back more than ready to smash everyone who stood in my way.

This creates an overlapping set of incentives to revisit and explore old areas. With new tools, you're less fragile, and have more access. And as you explore, you can find additional enhancements to new abilities in addition to the health and energy power-ups that I found so vital to my survival later on. There are even alternate costumes to find, each of which tells the story of a fallen Strider comrade.

Strider regularly shines in showing restraint amid that skill-based play. Learning the game, learning its language and tricks makes for a more rewarding experience. But Double Helix seems to know where to pull back, where to allow excellence, rather than demanding it with an iron fist.

This is a happy deviation from the less-forgiving era Strider derives from, and, as it happens, I would have liked to see another one as well. I'll grant you that nonsensical stories and sparse presentation often defined games of the time, but I could have lived without it here. Also, there's a special place in Hell for games that cover parts of an active screen with nearly-solid color for pointless bits of exposition — a sin that Strider commits early and often. 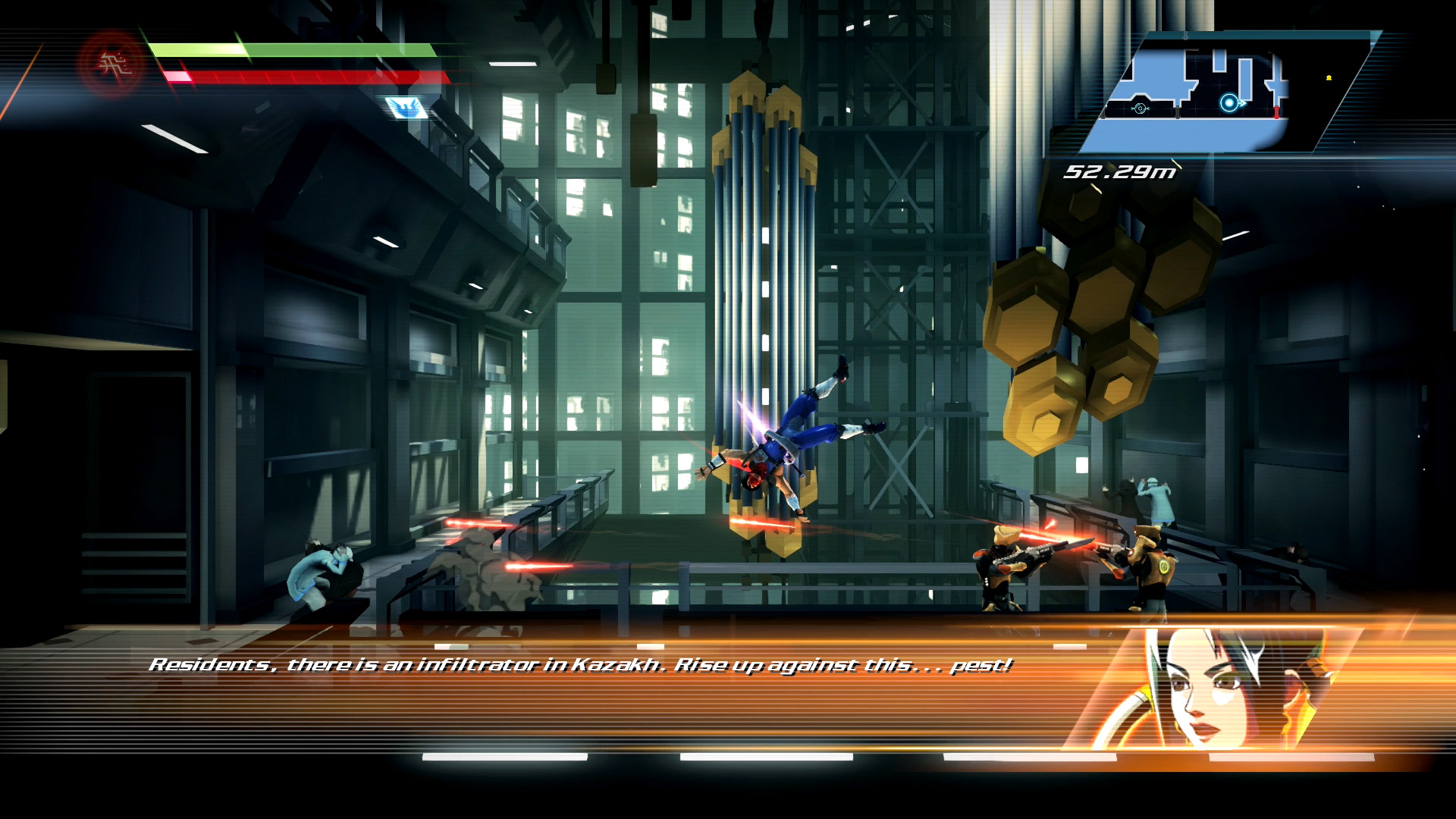 Strider takes the best parts of its lineage to heart

Penance notwithstanding, Strider takes most of the best parts of its lineage to heart. Double Helix has built a game that captures the wide-eyed exploration of 8-bit adventures and marries it to razor-sharp side-scrolling combat. It's not that Strider ever felt like it needed that combat sophistication â but it is all the better and more vital for it.

Strider was reviewed using an Xbox One retail downloadable voucher provided by Capcom. You can find additional information about Polygon's ethics policy here.