A Character Like Me: the lead writer of Dragon Age on inclusive games

Share All sharing options for: A Character Like Me: the lead writer of Dragon Age on inclusive games

"I am a lesbian, and Dragon Age is still a beacon to me, when it first came out, so did I, and a lot of people alienated me, and I didn’t have many friends, and there was only my Xbox. Origins was magical, I could have a character that looked like me! And romance a woman! It was life line I desperately needed, for my sanity. Thank You so much!"

The quote above came from an anonymous fan question.

I pondered just how I should answer this question, or whether I should at all. Talking about myself as a gay man, and how that relates to my work, isn’t something I tend to do. I think it raises the specter of "the gay thing" if I talk about it too much, as if it were the only thing with which I’m concerned.

It’s not, by any stretch, but it’s a valid question — and a question that keeps coming up. So I’ll address it as best I’m able. If this is a topic you’d rather not read about, I suggest moving on.

To the person who sent this question: thank you for letting me know how affecting it was for you to have a game where you could be yourself. We make roleplaying games, which means that the character you play doesn’t have to be yourself, but I believe there’s an element where having a game acknowledge that you exist can be validating in a way most people never consider — no doubt because they have no need for validation, and thus no knowledge as to what the lack of it can do to someone.

I’ve said many times before that no single game can be everything to everyone, and that’s absolutely true. The opportunities we get to include stuff like this, even if they’re few and, yes, even if it’s just in a game and thus not the most important arena for effecting change, are very gratifying to me as a developer — and, I think, for the developers with whom I work.

It may not be much, but it’s not nothing, and people tell us all the time its not nothing. We receive heartfelt messages of how much our efforts mean all the time, and it galls me to consider how the assumption out there is that we should consider these individuals less important than those who say hateful things, that placating the hateful should be more of a priority for us or any developer.

I will say this: BioWare isn’t perfect, and there are definitely times when I wonder if we couldn’t do more, or do it differently, but I really appreciate the company for whom I work (and this includes Electronic Arts) when it comes to their willingness to consider what it takes to be inclusive.

Because it’s not that much, taking into account all the other things we need to do in order to get a game out the door — 99 percent of which wouldn’t even be relevant to this topic at all. If I didn’t have bosses who considered this important, and they didn’t have bosses who considered this important, it wouldn’t happen. Really it would only take one person in that chain to go, "No, this isn’t something I’m comfortable with," and it would stop right there.

Speaking just for myself, I’ll say that I sometimes find myself in an awkward position. I entered the industry at a time when dealing with issues like this seemed outside the realm of possibility. When the romances in Baldur's Gate 2 were made, I didn’t even think to suggest we should include same-sex romances … because why would you? It just wasn’t done. 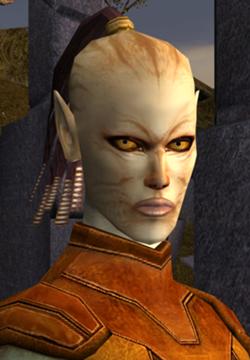 The first time it came up was on Knights of the Old Republic, with Juhani, and that wasn’t my doing. I was, in fact, completely startled by the idea that, not only was this a thing that could happen, but moreso that my fellow developers — the vast majority of whom are straight men — would not only be okay with it but actually want to include it.

I’m not sure I can express how that made me feel. I guess I’d always assumed they simply wouldn’t, despite these being a group of liberal-minded and compassionate people. I thought the audience "out there" just wouldn’t accept it, and that we would never do anything to rock the boat. I underestimated them. It was a strange lesson to learn.

It can still be a little odd. I don’t think of myself as a "gay developer." I’m a developer who happens to be gay, and there’s this one point of intersectionality where my personal life becomes relevant to my work life … and it’s not easy to figure where your responsibility lies.

I contribute my viewpoint to the mix like anyone else, but it’s hard to find a mix between pushing for things you feel are right to do and being "that guy"… the one that gets dismissed whenever he brings up a topic because that’s "his thing." What point is too little, or too much? I have a whole ton of other responsibilities on my plate, so at what point am I focusing too much on this one thing when I have so much else to do?

There’s also an element of second-guessing which comes up, if I’m perfectly honest. If I’m proposing something involving gay content, or looking at someone else’s proposal which includes it, there’s a part of me which wonders if I’m not unduly biased — if I’m not steering my project towards being viewed as "the gay game" by the audience, or filtering the content through a personal lens it might not deserve.

It’s at those points I have to remind myself of the truth: there are people out there for whom the presence of any gay content will automatically render it "the gay game." The presence of two bisexual male followers in Dragon Age 2, only one of whom made advances on a male player without first being flirted with, means "every man in Thedas is gay and wants my man-meat."

These are the same people for whom the mere existence of a gay character, or a plot that deals with gay subject matter, really anything that forces them to acknowledge that homosexuality so much as exists, is going to be a personal insult. I remind myself that it’s not that much to include, and really it’s very little in comparison to the entire rest of the game … and thus, considering what it means to those fans who receive that validation almost nowhere else, it’s not too much to demand a bit of tolerance and compassion from the portion of the audience for whom this content is not even intended.

There are people out there for whom the presence of any gay content will automatically render it 'the gay game.'

Really I’d just like to get to a point where this sort of thing doesn’t need to be discussed, where it’s simply expected. Again, it seems like the presence of a discussion at all leads some to moan about how it’s all everyone even talks about, and how it dominates the videogame industry … as if it could, as if that’s a thing that’s even remotely happening, or as if the issue’s already settled and couldn’t everyone just talk about something more relevant to me now?

The more that gets said, the more it reinforces my belief that there’s a place for such discussion right now, that it’s needed, even amidst all the other concerns that I must deal with day-to-day which have absolutely nothing to do with who I choose to date.

That’s how attitudes change, after all. I’m not going to pretend we already live in tomorrow, but acknowledging the criticism and striving to do better is — as an industry — how I think we’ll eventually get there.

David Gaider is the lead writer of Bioware's Dragon Age series. This piece originally ran on his personal blog.