Despite Volume's male hero, it still aims to challenge the notion of masculinity and heroism

Share All sharing options for: Despite Volume's male hero, it still aims to challenge the notion of masculinity and heroism

A screenshot of a female character against a geometry laden backdrop shows what Mike Bithell's Volume could have looked like had the indie developer continued developing the game with a female protagonist.

But for former Bossa Studios lead, there are other ways of challenging the masculine heroism that makes up the lion's share of video game narratives. There are still stories starring men worth exploring, he says, despite what he calls "the boringness of the standard chiseled beefcake with the big gun."

Bithell's plans changed substantially in pre-production of the game, he said. Initially, he intended to release a new heroine-led title following the launch and later success of his first independent release, Thomas Was Alone. This, he said, would be a way to experiment with writing for a new gender after developing Thomas' titular character.

"When I sat down to come up with the story of Volume, and who would be its characters, I of course had to decide on which gender the protagonist would be," Bithell said, describing his early process. "I was honestly leaning more towards a female character, just from the selfish perspective that my last game was focused on a male character, and I really dug writing for Claire, who was popular with fans of [Thomas Was Alone.]

'The game did have a female avatar for the first few months...'

"The game did have a female avatar for the first few months, mainly because I had the mesh lying around from a previous prototype. This was before I'd settled on what story I was telling, I was just throwing ideas of gameplay together and seeing what happened. At that point, I'd honestly still have been using a cube for the player character if I hadn't needed to account for eyelines and such."

However, as Bithell's narrative narrowed, so did his possible protagonists. Now in its current iteration, Volume tells an adapted version of the classic Robin Hood plot: the story of Robert Locksley, a thief who hatches a plot to tip the scales against the rich and in favor of the poor. "To play with that story," he said, "to look at and challenge that particular form of rich masculine heroism, I felt I had to have a male hero."

"As I zeroed in on Robin Hood, and specifically to adapting Robin Hood, I increasingly realized my main character had to be male. Locksley, ever since Henry VIII became his biggest fan, has been a rich hero saving the poor. This is a story about a man of privilege helping the little guy, and we've been retelling it over and over, right up to movies like Avatar. Why? Why is that story interesting? Is it OK to keep parroting it?" 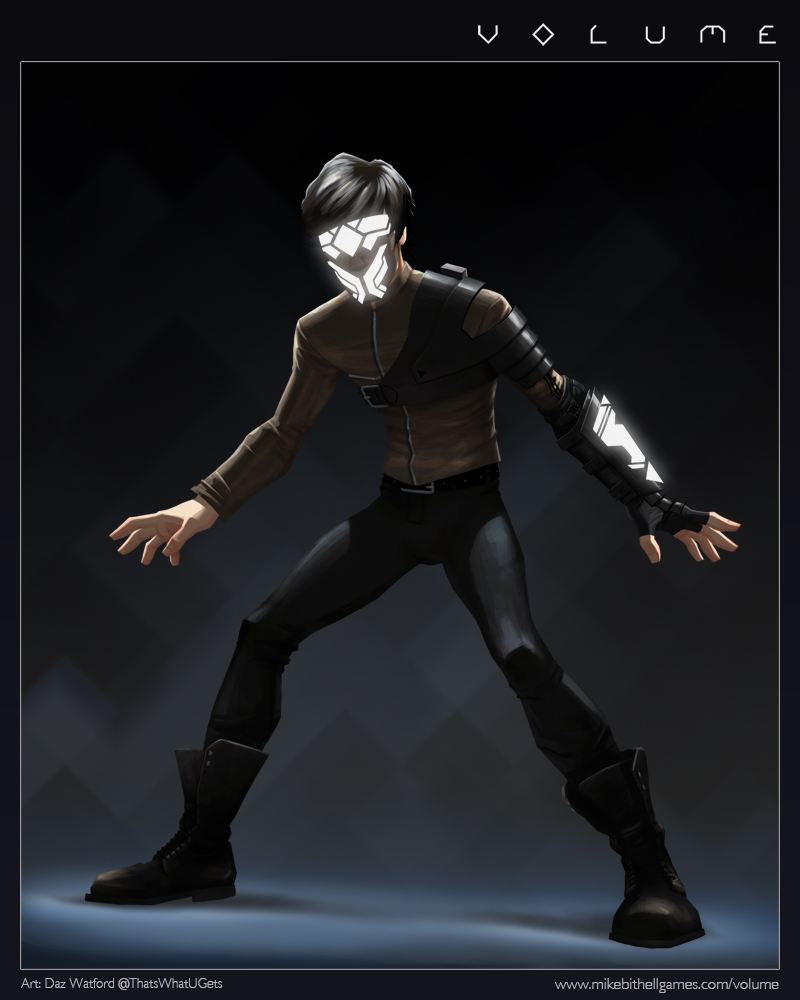 "My hope is that this is a different kind of male protagonist," said Bithell. "Smarter, non-violent, and a bit arrogant."

'My hope is that this is a different kind of male protagonist.'

While the game's story drove the gender of Volume's hero, Bithell did include the ability to play as a female character after completing the game. This option can be accessed in Volume's end game &mdash; which itself is focused on the creation of user-generated content and not on a pre-established story. Players will have the opportunity to remake levels using basic in-game editing tools and later share their own stories with the online community.

While Bithell's Volume didn't end up starring a female protagonist, he remains cognizant of the importance of gender in games. And it's telling, he says, that gamers are beginning to question the gender disparity in games too.

"I [hope] that when people play the game, they'll realize why I chose to tell this story with a male protagonist," said Bithell. "For me, that's the interesting shift in the thinking recently. Male heroes should no longer be the default, it's a choice, a choice that should be deployed when it works for the story being told.

"The thing that's interesting with gender, and is exciting, is that the conversation has gotten to a point where I'd even be asked 'Why male?'. That's a big deal, and speaks a lot to the awareness that's brewing in the industry about gender depictions, and frankly, the boringness of the standard chiseled beefcake with the big gun. People are getting tired of playing the same grizzled man carrying a variety of guns."