Share All sharing options for: World of Warcraft level boost appears in in-game store for $60

World of Warcraft users will be able to pay their way to level 90 with the release of the upcoming expansion Warlords of Draenor, following the latest patch for the game in the lead up to the expansion's launch, MMOsite reports.

This follows the recent appearance of a level-boosting item into the game's official store during a server restart period that took place prior to the patch update. The new service is now officially available in the World of Warcraft shop for $60 with the release of patch 5.4.7. 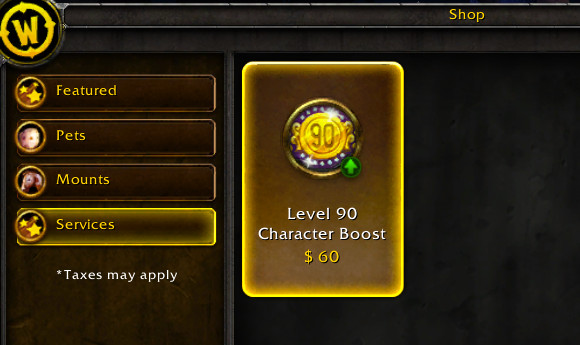 This isn't new territory for Blizzard. Those who pre-order the new Warlords of Draenor expansion will also receive one instant boost to level 90 in order to help them reach the new level cap of 100.

Following a survey that was sent out to "past and current" subscribers, Blizzard is evaluating methods of purchasing a character upgrade directly for those who want to boost multiple characters to 90, without having to purchase multiple boxes. A character upgrade feature will be tested out "in the near future."

The Warlords of Draenor expansion will take place in a new world called Draenor, which is the home of the orc and draenei races. It will feature new character models and animations, which you can see in the trailer below. Blizzard will also raise the MMO's level cap to 100 with its release.