Treachery in Beatdown City, $5 and being uncomfortable for your dream

Share All sharing options for: Treachery in Beatdown City, $5 and being uncomfortable for your dream

Young Shawn Alexander Allen found $5 on the ground, and all he wanted to do was buy some cards with it.

He lived with his mom, and in his own words, they were "very poor." But he was a kid, and he didn't understand it. They argued over the money. She used it to buy groceries.

Living through scenes like this instilled an aversion in the creative lead behind the side-scrolling brawler Treachery in Beatdown City.

"I don't like asking anybody for anything at all," Allen told Polygon. "That's just something in my nature. When I bring something to somebody, it's like, yeah, I'm breaking this key thing."

Despite his obvious discomfort, Allen recently launched a Kickstarter campaign for Treachery in Beatdown City, where he's explicitly asking for money. He wouldn't have done it if he didn't think it was necessary. Development is expensive. He's running out of funds, and he still wants to make a game that he believes people want to play. He's shown it at GDC, at EVO, to students and academics and friends in the New York area. Everybody seems interested.

"The impetus of this game is the timeless creation of characters that you just love," he said. "I love Double Dragon. I love Street Fighter. These are characters everybody likes, and I want to continue to hopeful make characters that people like."

"The impetus of this game is the timeless creation of characters that you just love."

So despite his reservations, Shawn Allen is doing what he believes is the right thing to do for his game. He's asking for money. He's just not comfortable with it. In part, that's because he could very well hear the same kind of answer he heard when he found $5 as a child. It's also because, if this doesn't work, he's not sure what happens next.

"My mom's always said, 'What's the worst thing that somebody could say?' It's no.' And I'm like, 'Yeah. I don't want to hear those Nos, because those Nos have happened to me my whole life.'"

Treachery in Beatdown City started a few years ago as what Allen describes as a "practice project." He and a programmer began working part-time on the game while Allen was still working for Rockstar Games. He left Rockstar and, for about nine months, got by on a severance and unemployment.

Then, as the money ran out, he had a choice to make. Does he return to AAA development? Find an office job somewhere, which might inadvertently destroy the game he really wants to make? Or does he dedicate himself to the game he wants to make before he can't make it anymore?

"Making games is strange, because it's like this full-time job," he said. "And if you're not going to do it full-time, then you're going to do it part-time, and that means something that can be done in a year [working full-time] might take five years [working part-time]. Then you've already missed your chance." 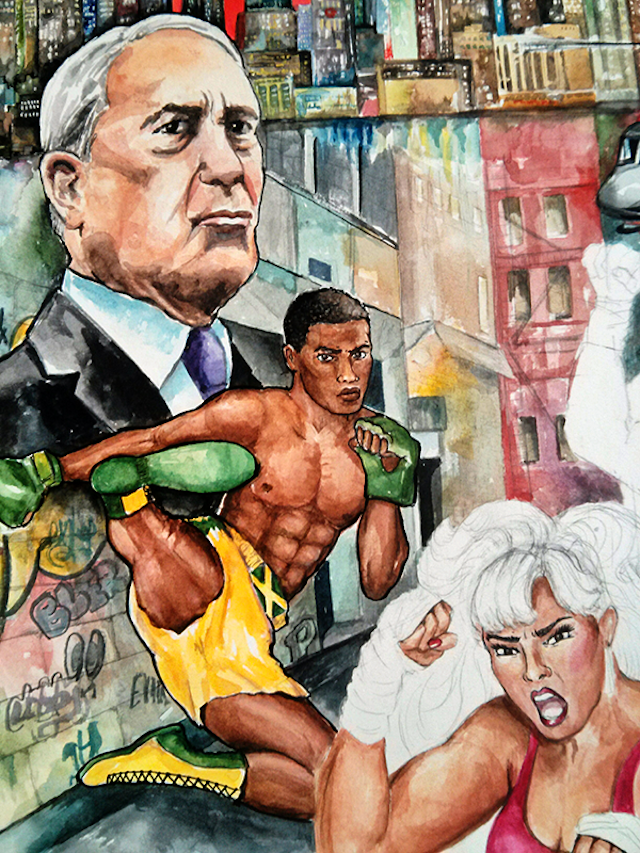 As he mulled his options, Allen watched what he calls "these amazing indie games" get released. He watched the rise of Kickstarter. He saw opportunity and founded NuChallenger, a game development studio focused on turning a "practice project" into a full-time gig.

Having dedicated himself to Treachery in Beatdown City, he also needed to figure out how to sustain himself and his family financially while he ground away on the game's development. He could go to publishers, but he said publishers tend to want to see "an almost finished game" before they'll invest in it. To help, his wife, a fine artist, first took a part-time job, which becomes a full-time job.

Things started to look up when he was approached about bringing the game to PlayStation Mobile and PS Vita, the version Polygon saw last year. Originally planned for release last fall, Allen said he hopes to have those out "within the next month or so" with a single level equipped with 26 unique characters and a cliffhanger ending that sets up further episodes.

The Sony deal came with development funds, but those have dried up. Hence, the Kickstarter campaign, where he's pitched a five or six level version of Treachery in Beatdown City for Mac and Windows PC.

"This is the most stressful thing I've ever dealt with."

He wants everyone to play it because he wants give people something for their pledges and take their feedback. He's soliciting that with some of the smallest pledge tiers and plans to start a forum where players can check in.

Shawn Alexander Allen is trying to make a game that he believes everyone can enjoy. It's tough putting it out there in others' hands — "the most stressful thing I've ever dealt with," he said — but he's willing to be uncomfortable for his dream. And when it came time to take the game to Kickstarter, he made sure to do it in the way he felt was best for the game and players. He's not just asking for their money. He's asking for their input.

You can hear the excitement in his voice as he starts to talk about why he wants everyone to play the game. And that brings him to a story about his daughter.

He tried to teach her Street Fighter, but that didn't work. When Marvel vs. Capcom 3 shipped with a Simple Mode that allows players to pull off combos and moves in the fighting game easily, they had a great time playing together. That's what's he's trying to create in Treachery in Beatdown City, in spirit.

"The game in itself ... has this simplified mechanic that just allows you to do, instead of being the highest executer. So it allows people at the top and the bottom of whatever skill level to play it and enjoy it. That's why we want to have as many people play it and enjoy it and keep doing so. We're going to keep bringing it out to people and keep getting personal feedback.

"That's just the goal: To create a huge community around this."