Wolfenstein: The New Order managed to do something during its first three hours that few games have ever done: It made me feel a little queasy.

The only other game to accomplish that was Wipeout Pure for PlayStation Portable, a game that, when played on a train, managed to mess with my equilibrium enough to make me motion sick. That moment of stomach upset was a confluence of moving backward in a train car while speeding forward throughout futuristic, brightly colored tubes. It was the last time I played a racing game on public transportation.

The new Wolfenstein managed to unsettle me for a different reason. I don't get sick playing first-person shooters, but its display of graphic violence and Nazi-inflicted atrocity got to me. One sequence in particular from the game's first chapter disturbed me, enough to be convinced that developer MachineGames is making the new Wolfenstein a solid, old-school shooter wrapped around a chilling horror game. (Note: Some minor story spoilers from the game's first chapter follow.)

Wolfenstein: The New Order starts off with the kind of explosive action set piece that's expected of big budget first-person shooter campaigns. Our hero, William "B.J." Blazkowicz, is tasked with hastily dumping the cargo of a rapidly descending bomber and repairing the plane's fuel line before it explodes; this high pressure situation is the tutorial for the game's controls, by the way.

That sequence ends with a rather banal turret sequence in which B.J. shoots down a Nazi air fleet, a death-defying plane-to-plane jump that defies physics and an assault on a Nazi-occupied castle.

Blazkowicz and his Allied comrades are on a mission to capture General Wilhelm "Deathshead" Strasse, who returns from previous Wolfenstein games as the main antagonist. In the Allies' approach to the castle, Blazkowicz encounters scores of Nazi soldiers, attack dogs and mechanized creations, including hulking metal hounds and a towering walking cannon.

The gunplay in Wolfenstein: The New Order is pretty satisfying, as is the squishing sound of Nazi soldier heads bursting open from headshots. A wall-climbing set piece in which Blazkowicz and friends rappel up the side of the castle — with enemy soldiers popping forth from windows like a Nazi Advent calendar — is also enjoyable for its change of pace and perspective.

But what Blazkowicz finds when he enters the castle is less appetizing than the thrill of slaying Nazi grunts. He and his team encounter a surgical torture chamber, the work of Gen. Deathshead. Still-living prisoners are sliced open, their flesh splayed open to expose muscle and bone, seemingly trapped in the middle of a twisted medical experiment.

What follows is just as disturbing. Blazkowicz's team is captured by Deathshead and a quartet of Super Soldats, brutish Nazi cyborgs. Deathshead, armed with a gleaming scalpel, gives Blazkowicz a choice: Which of his fellow soldiers should be dissected and experimented on first? The four men are handcuffed, held down by the Super Soldats, as Deathshead waits for the player to look at which of Blazkowicz's allies will be sacrificed. 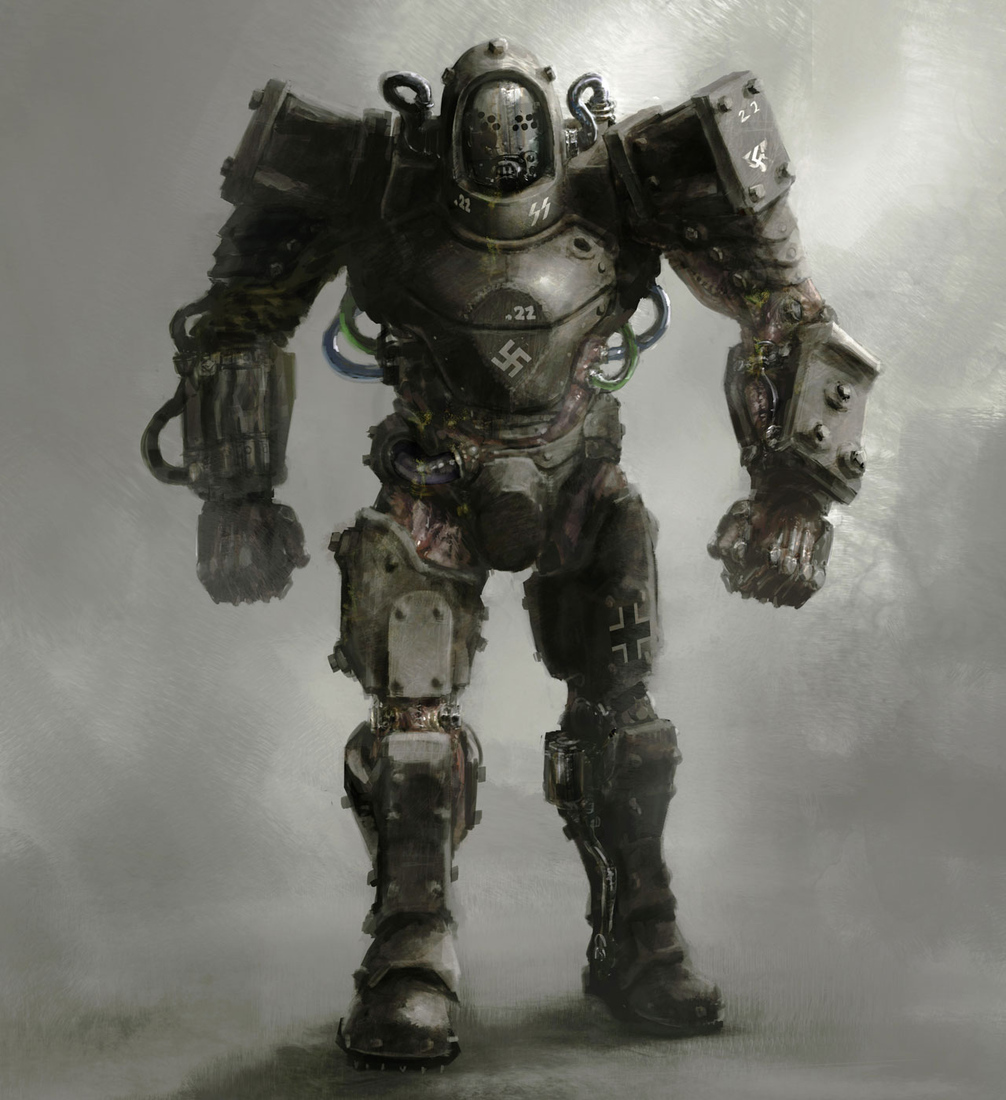 Regrettably, I chose not to choose and watched the unfortunate aftermath. Two Super Soldats pulled back violently on the heads of my two options, snapping their heads backward at a nauseating angle. Their eyes went dead. My stomach flipped. The soldier next to Blazkowicz had his head crushed into a grate. I watched from first-person as B.J.'s head was pounded into the metal.

Next time, I picked the guy on the right.

That uncomfortable sequence sets the tone for the rest of Wolfenstein: The New Order, which continues from there with a chain of similarly disturbing displays of Nazi power. B.J., taking some shrapnel to the head in his escape from Deathshead's castle, suffers severe enough brain damage to put him in a vegetative state, landing him in a Polish mental hospital. This lasts for 14 years, a passage of time MachineGames displays in a heartrending time-lapse sequence from B.J.'s perspective.

When Blazkowicz witness another Nazi atrocity at the hospital, in which the mentally ill are casually disposed of with pistols, having outlived their usefulness as medical experiment fodder, he breaks free from his vegetative state, continuing his rampage.

Wolfenstein: The New Order gets back into its action-oriented FPS groove from there, laying the foundation for its Nazi world domination narrative and setting B.J. up to join the resistance against the Third Reich. But it's not all gratifying shoot 'em up action from here on in. Blazkowicz manages to get his hands on a high ranking Nazi officer whom he interrogates with an oversized chainsaw and, with the help of his former nurse (and love interest), Anya Oliwa, embarks on an undercover mission.

This leads to another terrifying sequence, in which Blazkowicz is interrogated by an SS soldier, Frau Engel, who performs a sort of psychological test on our hero. After the horrifying outcome of choosing incorrectly — or not choosing at all — earlier in the game, this simple game of binary choice is nerve-wracking.

MachineGames heightens the sense of tension throughout the game through its audio choices. In some of the firefights we played, the sound of gunfire was almost overwhelmed by a persistent, escalating whine of distorted ambient electronic sounds. It's unnerving, making moments of typical run-and-gun action unusually stressful. It helps establish a sense of dread, even when you're being generously fed Nazi-killing power fantasy.

Blazkowicz's internal dialogue early on matches the game's early, horrific tones. He doesn't crack wise or deliver tough guy one-liners. He's mostly reserved, almost bland — despite being a super soldier that can take a licking from a giant robot dog and recover from a 14-year coma like a champ.

The first few hours of Wolfenstein: The New Order surprised me. I wasn't expecting its onscreen horrors to be so affecting. I didn't anticipate much beyond the satisfying shooting I'd played nearly a year ago. I was similarly caught off guard by how well Wolfenstein's stealth options played. Rather than run and gun during one assault on a Nazi checkpoint, I opted to take officers out from behind, keeping reinforcements at bay. Turns out quiet knives to the skull can be just as fulfilling as dual-wielding shotguns and gibs.

MachineGames has described its take on Wolfenstein as "a dark-roasted blend of drama, mystery, humor," but it was the game's injection of horror that stood out most during Bethesda's recent preview. And it reignited my interest in The New Order.