Dwarves team up for double trouble in Lego The Hobbit

Share All sharing options for: Dwarves team up for double trouble in Lego The Hobbit

Like the films and books, Lego The Hobbit sees Bilbo Baggins joining a band of dwarves as they fight to reclaim their lost kingdom. Camaraderie is key for the vagabond adventurers — which is why TT Games is introducing a new game mechanic into its repertoire that encourages dwarves to pair up.

Coupled together, dwarves can move heavy obstacles, reach new heights and even deliver wicked blows to bosses. Speaking with Polygon during a recent press event, executive producer Nick Ricks explained that the mechanic was created after discussion on what made the property unique.

"For us, it was the sense that the dwarves are really just thrown out from their home in such peril and adversity," Ricks told Polygon. "Smaug has stolen their ancient homeland. They're just outcasts. What's so amazing about them is their collaboration. How they stick together through thick and thin despite their bickering. 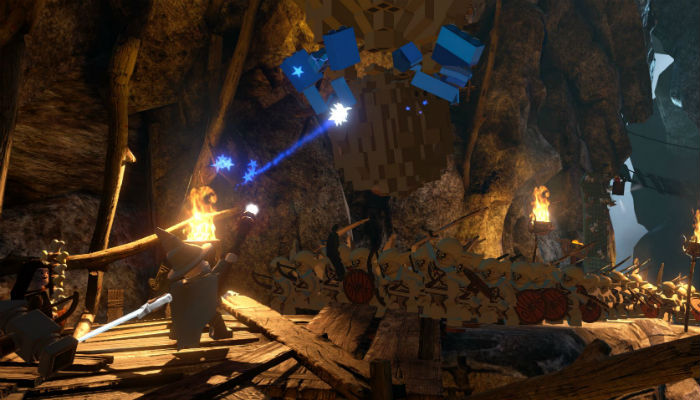 "We thought that was a really important, emotional moment throughout all the films which we naturally wanted to capture. The fact they they do combine and work together seemed fit for the idea of Lego play. You combine bricks, you build things together. They seemed like a natural fit."

During our time in Goblin Town, our band of adventurers was split into two separate parties; Lego The Hobbit automatically swapped between the two at key points in exploration. As each group progressed, we could pick our individual character — such as Thorin or Gandalf — by selecting their portrait from a radial menu.

Each dwarf has their own abilities and preferred weapons, from a bow and arrow combination to a giant hammer. Some are better equipped to deal with specific threats — a foe that requires a good whomping from a long-range weapon, for example. But teaming up can be done with the nearest dwarf and good timing.

With a dwarf at our side, we could gallop around the level as a pair. This was helpful for smashing through enemies, or launching coordinated attacks against big bosses with the right button press. Buddying up is helpful outside of battle, too. In one case, we stacked four dwarves like a totem pole as a way to climb and reach a new area. 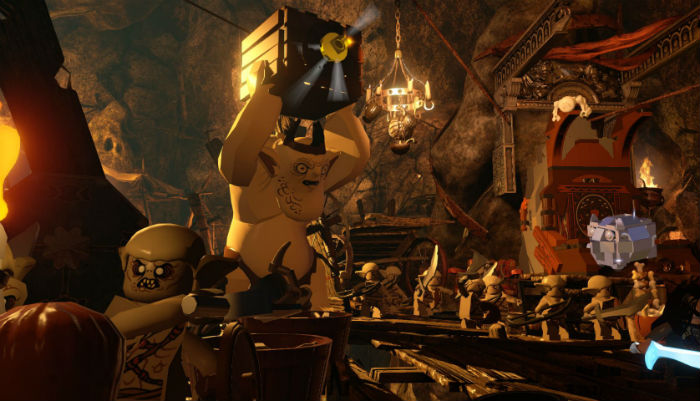 Lego The Hobbit is set to launch this spring for every current platform. Although the game will only cover the first two of Jackson's Hobbit films, TT Games does have plans involving the third.

"At the moment we're completely focused on making Lego The Hobbit the best it can be," Ricks said. "We know there's another film coming out, and we've got very excited plans about that, but I'm afraid there's nothing I can say today."