Plants vs. Zombies is an elevating factor in a tired genre

Plants vs Zombies: Garden Warfare is an idea that on paper at least swings wildly between stupid and obvious.

On the one hand, Plants vs. Zombies as a series has been a charming casual success, full of bright, fun character design and easy-to-grasp mechanics — none of which seems all that suited for a shooter powered by the same tech behind the Battlefield series. But Plants vs Zombies is also a game about militant plants that destroy zombies by blasting them apart, smashing them or otherwise ruining their day.

The good news? The alternately great and weird idea of moving PVZ into the third-person shooter space works. Garden Warfare artfully starts with great shooter chops and uses PVZ to take bold risks with its design, with inspired twists on multiplayer conventions.

It's important to clarify right away that Plants vs. Zombies: Garden Warfare is strictly multiplayer. There's no fun campaign, no cute linear narrative driving each new scenario forward — other than the series' resident human presence, Crazy Dave, and his impulse to invest in living-compromised real-estate markets — and no solo play. Instead, and for the first time for the series, Garden Warfare is all about playing with and against other players.

For the uninitiated, Plants vs. Zombies tells the epic and unlikely story of a zombie apocalypse where adorable but powerful house plants defend the remaining humans' lawns from the shuffling horde. Where the original games were variations of the tower-defense genre, where you'd plant, uh, plants in a grid in the best pattern to take out waves of zombies, Garden Warfare gives you and your partners direct control of the plants AND the zombies.

Both sides are broken down into unique character classes that fill particular roles in each match. For the plants, the Sunflower is a healer, a role fulfilled by the Scientist on the zombie side. There's no identical counterparts — the Sunflower's basic weapon resembles a submachine gun or assault rifle (though it's bullets literally made of sunshine shooting from the Sunflower's face and yes it looks as ridiculous as it sounds), while the Scientist's goo-blaster is a shotgun of sorts. The Sunflower heals with a beam, while the scientist drops a fire hydrant spewing purple healing goo for their zombie teammates.

With four characters on each side, this makes for a total of eight very different combatants. Unlike most shooters, the two opposing teams play differently than one another. It was fun to have to switch up tactics and adjust on the fly depending on what side I was on, and there's a lot of quirks to learn about Garden Warfare.

Multiplayer matches were all about this asynchronous interaction between different classes. It all looked like chaos on the screen, but Garden Warfare rewarded tactical thinking and smart play over twitch reflexes and sick headshots. And even more quirky options allow for an entry point to players who aren't serious shooter veterans.

That said, Garden Warfare has an incredibly solid shooter foundation — it's clear that PopCap has shared much of EA sister studio DICE's code from the Battlefield series (it even shares a near-identical kill-cam). Battles look ridiculous as Peashooters throw explosive chile beans to take out Foot Soldiers and All-Star zombies at choke points, but Garden Warfare is one of the best-controlling third person shooters I've ever gotten my hands on.

This presents the potential for an unheard of level of crossover between two very different potential audiences - shooter fans and more casual players who love everything about Plants vs. Zombies. The competitive multiplayer, with its "Team Vanquish" mode (team deathmatch) and objective-based capture-and-progress Gardens and Graveyards (think Rush in the Battlefield series) is for the former. Garden Ops is for the latter. Mostly.

Garden Ops is a co-operative wave-based survival mode, where each player chooses a plant character as part of a team tasked with defending a garden from progressive waves of zombies. It's a simple setup, but it comes together beautifully, especially for teams who work together. The only real problem here is one of difficulty. Garden Ops is really, really, really challenging on Normal with anything less than a full squad (and our team struggled at times even then). On Easy, my two-player team had a tough time. 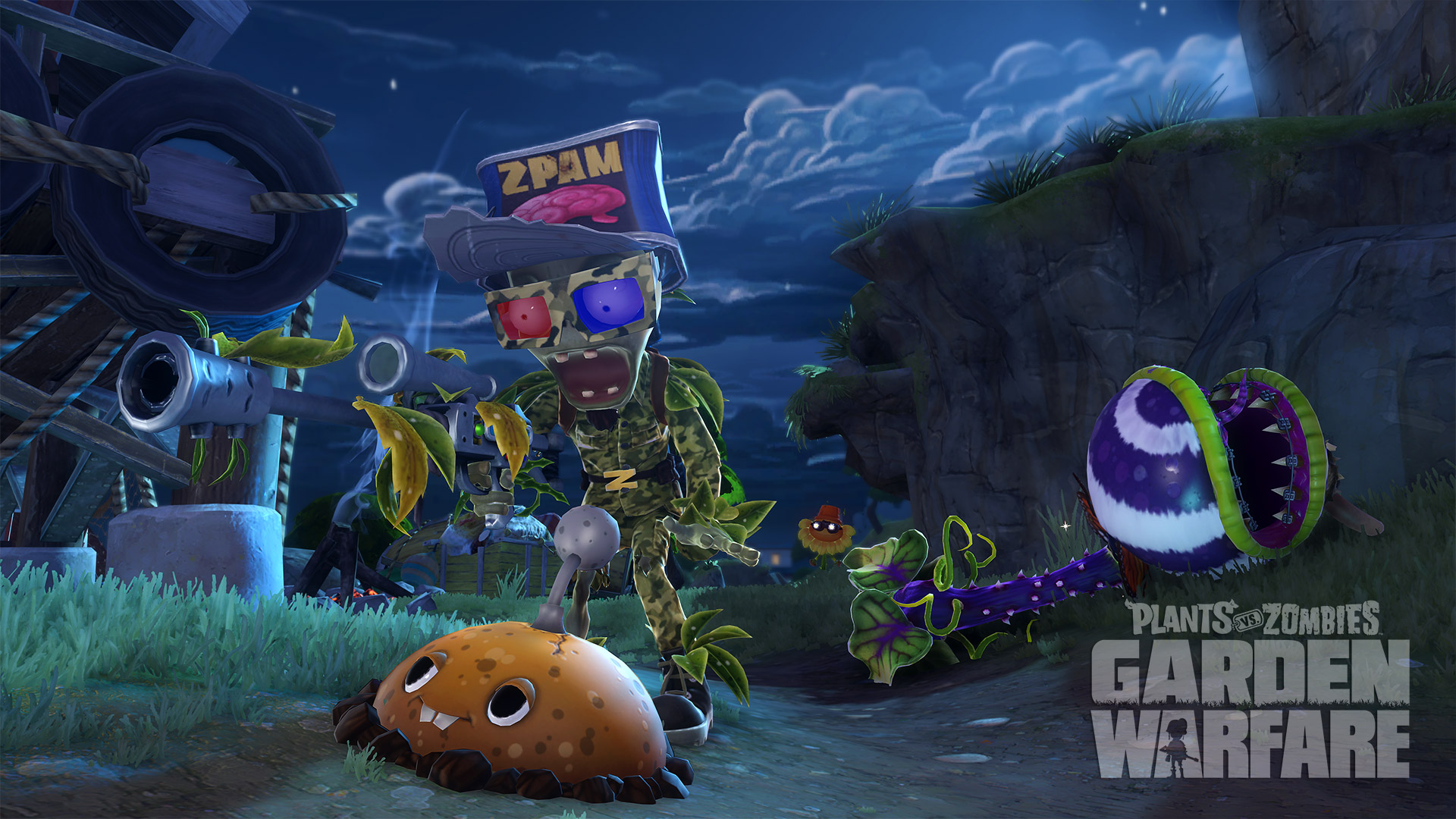 This seems counter to how aggressively Garden Warfare courts a broader and maybe younger audience than just about any other third person shooter. This is especially apparent in the surprisingly robust and compulsive Sticker Store. Each match and mode in Garden Warfare doles out PVZ coins, which can be used to by sticker packs of increasing rarity and price. Stickers can provide packs of single-use items — defensive plants to put in pots for Plant players and classic PVZ zombies to call forth from graves for the Undead — or permanent limited ability bumps for specific classes. There are also alternate character skins that can be collected piece by piece. It's a fun system that doesn't currently have a pay-mium model in place, though I have to wonder how long it'll be before that changes.

The Sticker Store underlines the glue that holds Garden Warfare together. The aesthetic of Plants vs. Zombies is so vital to the series' appeal, and budding from every surface of the game. It really ties the room together, if you will — even though the newly "realistic" renditions of the titular Plants turned out much more terrifying than the walking dead did in the transition to third-person shooter.

Plants vs. Zombies is an elevating factor in a tired genre

"Different" doesn't always mean good. Unexpected combinations of action and subject matter don't always work out. But here, they're elevating factors in often tired genres. Garden Warfare could have been an underwhelming exercise in missing the point, of mismatched agendas. Instead, it takes the best parts of PVZ to make an experimental shooter that feels freed from tired conventions or compromise.

About Polygon's Reviews
8.5 xbox one