Castlevania: Lords of Shadow 2 fails to deliver on its predecessor's big promises

Castlevania: Lords of Shadow 2 is supposed to deliver a payoff.

The first Lords of Shadow was released to a skeptical Castlevania fanbase in 2010. Despite the problems some had with developer MercurySteam's handling of the beloved franchise, it found a following, thanks in part to several major late-game twists. This left players buzzing for a sequel, and after a brief handheld sidestory in last year's Mirror of Fate, the true follow-up is finally here.

But this conclusion to MercurySteam's run on Castlevania is a far cry from the exciting potential suggested by the first game's cliffhanger ending. Lords of Shadow 2 fosters brief reminders of what made the first game special, but its novel premise is squandered on boring environments, terrible set piece moments and all-but-outright refusal to deliver on the over-the-top narrative that drew me in to begin with. 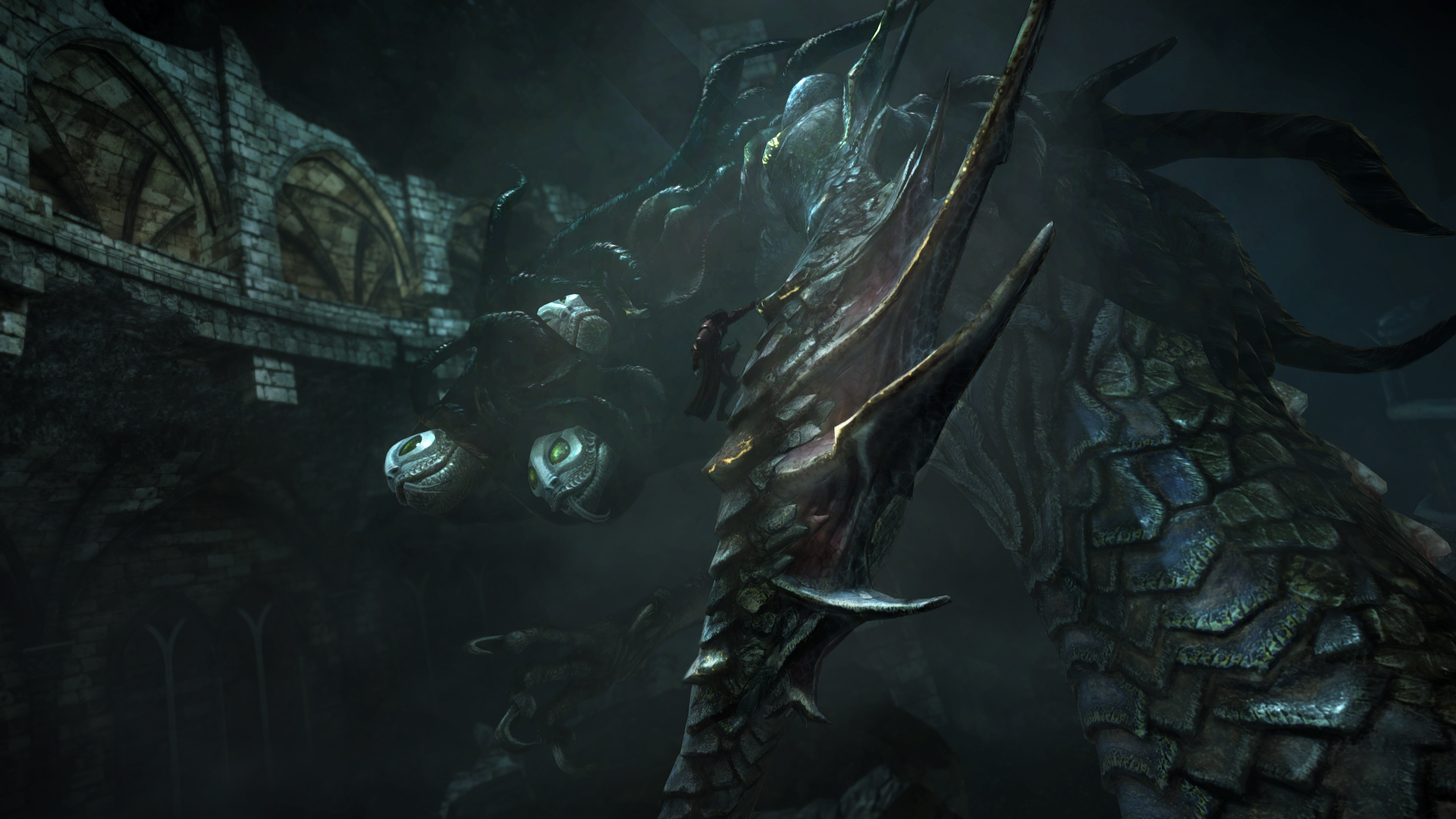 Lords of Shadow 2 starts with two hooks hanging with plenty meat for the plot. It picks up from Lords of Shadow's post-credits stinger — the revelation that original vampire hunter Gabriel Belmont had himself become Dracula.

This sequel is the first game in the Castlevania series that gives you control of Dracula, rather than asking you to take him down. It also jumps over a thousand years past the first game's medieval fantasy setting and into a dark near-future. At the start of Lords of Shadow 2, Dracula awakes from a long sleep in the heart of what the game calls "Castlevania City" — a gothic amalgam of modern day London and New York built on the ruins of Dracula's castle.

I was eager to see how the game would handle bringing the powerful vampire into a more recognizable world, but it takes the most boring route possible.

For any imperfections it had, the first Lords of Shadow showcased an incredible variety of gorgeous environments over its lengthy journey. Lords of Shadow 2 has two: the city and the castle. The castle at least goes through meaningful changes from area to area — there are lava-filled depths on one end and a high, snowy parapet on the other — but the city is monotonous and tiring. Gray alleyways lead to gray sewers running beneath gray streets. Sometimes you take a shortcut through a factory or a hospital — but still all gray. 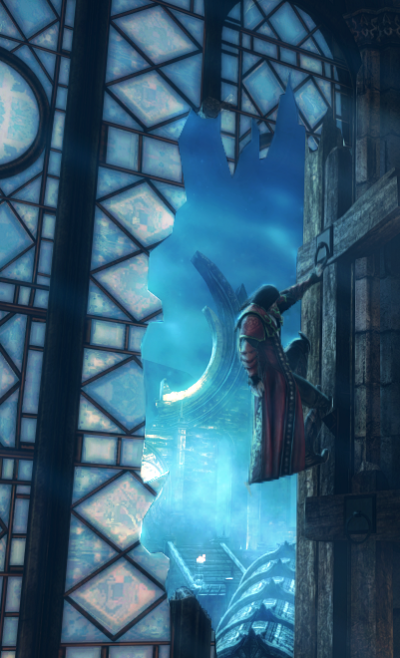 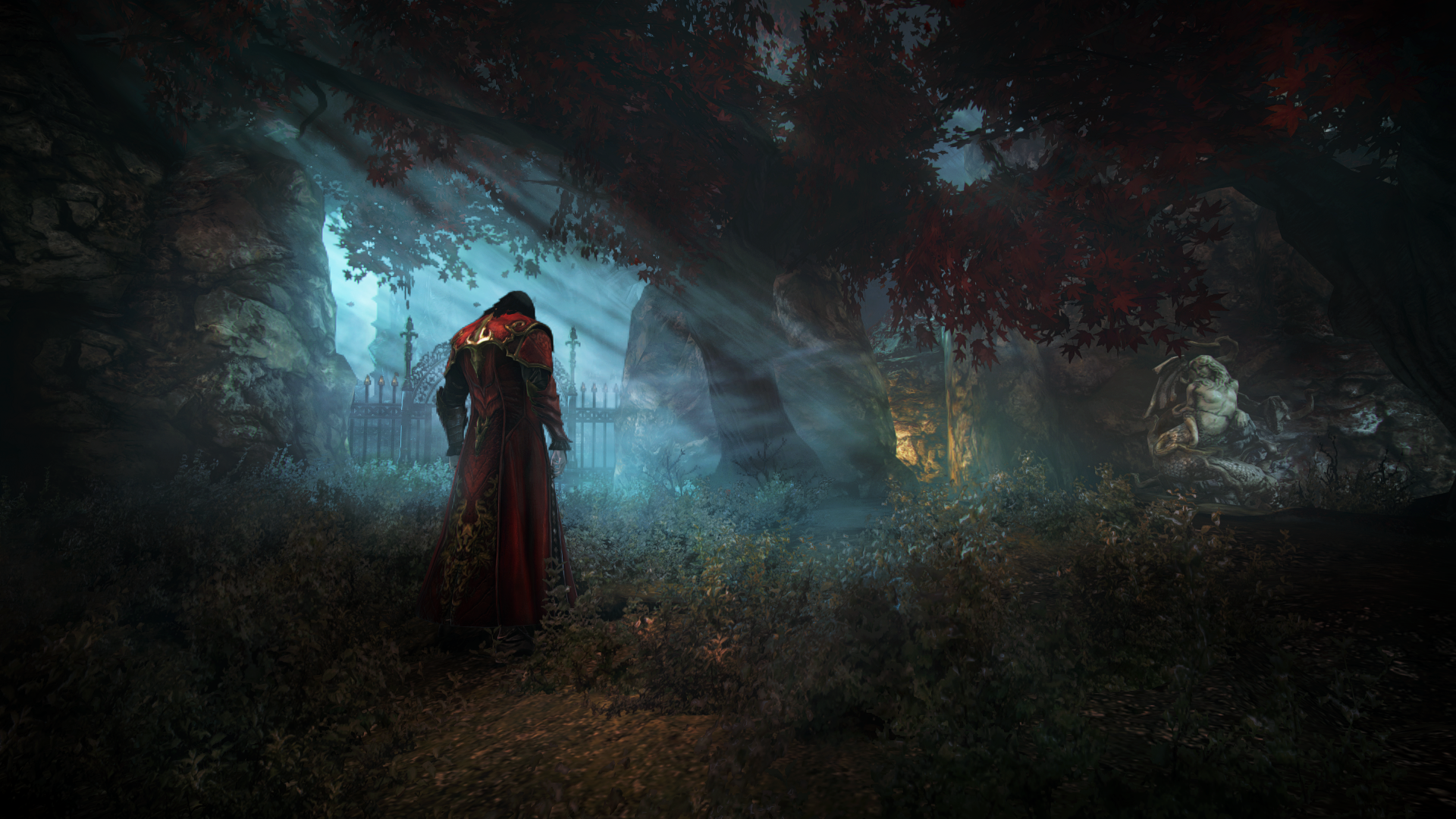 the heavy hand of Dracula

While 2010's Castlevania: Lords of Shadow told a fairly straight-faced fantasy epic, there was a hint of gleeful self-awareness in the over-the-top ending. The real enemy of the game is Satan himself? And the first historically significant Belmont actually becomes Dracula? When I first completed Lords of Shadow, I laughed at how crazy it was. I believed that developer MercurySteam knew it was ridiculous and wanted to embrace that.

If that self-awareness was ever there at all, it's depressingly absent in Lords of Shadow 2. The slow, benign story is told with overbearing melodrama and a poorly-plotted desire to make players feel like they're part of Dracula's inner struggle between hero and monster. I love stupid video game stories, but only when they accept what they are. Lords of Shadow 2 is schlocky genre fiction that sincerely believes it's something much deeper and more serious, and it's worse off for that.

Developer MercurySteam has traded the linear, level-based structure of its first Castlevania game for a more open but infinitely less interesting world. Like so many things in Lords of Shadow 2, that open world feels like a desperate callback to series classic Castlevania: Symphony of the Night.

Symphony of the Night established a much-loved structure for subsequent Castlevania games: start the player with limited abilities and grow them into an overpowered, supernatural force as the game progresses. For Lords of Shadow 2, this build-up is just another opportunity to fumble its finale.

One of the first abilities you receive allows you to hide from heavily-armed guards by transforming into a pack of rats. The game explains that Dracula is weak after waking from his long nap, and he must stick to the shadows until he's gained back his strength. I assumed that meant I'd be able to fight these enemies toe-to-toe eventually, but that point never came. Dracula can take on massive, god-like monstrosities by the end of the game, but never the everyday guards with big guns.

Since I had to hide rather than fight any time I encountered certain enemies, I found myself playing through a lot of terrible stealth sections in Lords of Shadow 2. These sections utilize an overhead camera more familiar to stealth-exclusive games, but they play out more like linear dungeon-puzzles. There's a single correct path through each room, and I would often get stuck trying over and over until I figured it out.

Dracula can take on god-like monstrosities, but never everyday guards

On Castlevania: Lords of Shadow - Mirror of Fate

Though they have some minor differences, each of the characters share the same core gameplay: exploring Dracula's castle, fighting off his minions and solving small puzzles. Mirror of Fate mostly operates on a 2D plane, but there's some depth to the backgrounds, with enemies sometimes approaching or attacking from behind. This strange middle ground between 2D and 3D leaves the movement feeling loose, both in and out of combat. The platforming is rarely complex, but it's hard to get a consistent feel for the length of jumps; combat, on the other hand, can be very challenging and is only made more so by the game's frustrating dodge move.

The necessity of dodging is the perfect example of Mirror of Fate's weird middle ground between 2D and 3D. In a fully 3D character action game — like MercurySteam's previous Lords of Shadow release on 360 and PS3 — dodging is easier thanks to a wider range of available movement that also allows for more types of enemy attacks. Mirror of Fate is built with that mindset; attacks drain your health bar quickly, so you'll need to be dodging constantly to make any progress. But when you can only dodge in two directions, it's a lot easier to get cornered, especially given the ground many attacks can cover. The fights have a no-room-for-error intensity that left my hands cramped and my anger swelling far more often than it gave me any satisfaction.

This frustrating sneaking gameplay culminates in one of the most miserable boss encounters I've played in a triple-A game in years. Dracula inexplicably chooses to hide from one mythical creature in Lords of Shadow 2's castle. A single misstep on one of the crunchy piles of leaves that dot the ground, and it's death and a reset to the beginning of the section. Thanks to inconsistent AI, I trial-and-errored my way through this encounter for a full hour before I finally triumphed — largely thanks to a glitch.

After that painful process, the game offered one more reminder of how poorly it understands proper build-up. It ends in a more standard boss encounter with the same monster. I was happy to take out my frustrations on this enemy in a regular fight, but there's no explanation for why Dracula didn't just fight him from the start.

Lords of Shadow 2's combat is at least more capable than its dismal attempts to depart from it. MercurySteam builds off the first game's challenging battles, replacing that game's light and dark magic with a functionally similar pair of weapons. The void sword lets you refill health with attacks, while the chaos claws allows you to inflict more damage. Balancing between them and Dracula's whip attacks makes for a tense and strategic balance. I always had to think about the the ideal time to use each weapon without depleting the limited resources needed to power them.

The combat feels great when it comes together — particularly in some of the intense boss battles — but it suffers the same unreliable camera that caused problems in the first game. It's even more of a struggle in Lords of Shadow 2's tight hallways and confined environments. The camera was constantly blocked by some random light fixture or pointing at a wall as an enemy nonchalantly tossed projectiles at me from out of view.

Castlevania: Lords of Shadow 2 fails to deliver on its predecessor's big promises

That's really the biggest shame in Castlevania: Lords of Shadow 2: It carries over all of the original game's weaknesses but fails to live up to its strengths. Three years ago, it seemed like MercurySteam had an intriguing vision for its rebooted Castlevania universe. But what we're left with at the end of the trilogy is a couple of cool ideas with no momentum. It's not payoff â it's anticlimax.