Twitch game streaming coming to Xbox One on March 11

Share All sharing options for: Twitch game streaming coming to Xbox One on March 11

Twitch gameplay streaming is coming to Xbox One on March 11, Twitch and Microsoft announced today.

The feature will be patched in to Microsoft's console for the North American release of Titanfall. Twitch adds the ability to live stream games, join games with broadcasters, use voice commands to create your own game broadcasts, archive game clips, and later watch those clips on any device.

Additionally, the app will offer exclusive content on Xbox One, allowing users to broadcast a full-screen view of the game they're playing or alternatively use an on-screen viewer indicator to keep an eye on how popular their live stream is. Media Achievements can also be earned by spectating games, while notifications can be set up ahead of time to notify users of an upcoming livestream. The Twitch app will also feature streaming text chat and the option to create private parties using voice chat outside of the broadcast.

"It's complete integration," Twitch CEO Emmett Shear told the AP. "It's exciting because we've never had the ability to broadcast from a console like this with such a deep level of integration. The concept of being able to join a broadcasters' party is really cool, and it's another step in the direction of interacting more closely with broadcasters." 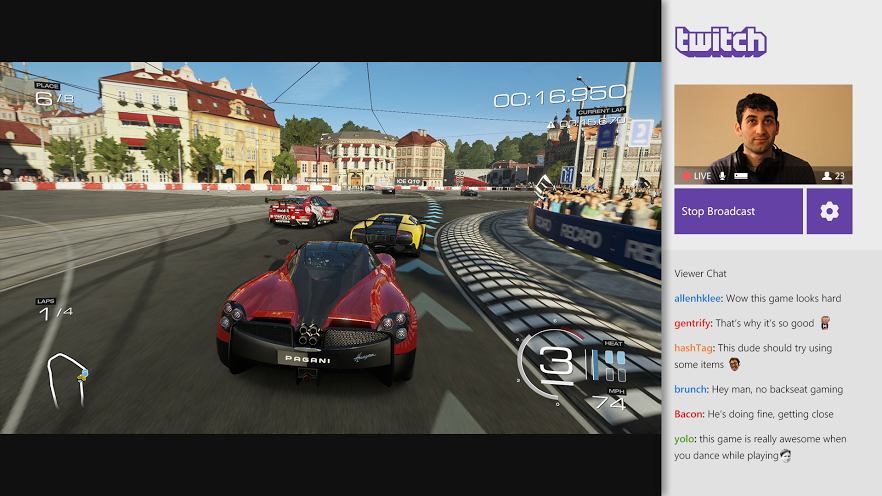 "That's a very certain type of experience," said Xbox chief marketing and strategy officer Yusuf Medhi of Twitch on PS4. "For us, we thought that was too limiting for what our fans would want. Our fans really want the full next-gen service, so that's why we decided to take our time, do it right and have it come out in this fashion."

Despite plans to allow gamers to livestream their gameplay through Twitch at the launch of Xbox One, the system shipped without this feature last November.

"We know the ability to instantly broadcast gameplay is something the gaming community is excited about, and we are too," a Microsoft spokesperson said at the time. "We are working to ensure the initial Twitch on Xbox One broadcasting experience meets the expectations of the Twitch community, so while this feature won't be available right away, we'll let you know as soon as it is ready. Our goal is to deliver it during the first part of 2014."

In addition to Twitch, Xbox One users will be able to access the Machinima Wingman app to access videos and game tips. The app is currently being prepared for the launch of Titanfall and will include videos featuring in-game help, tutorials and reviews when the game releases on March 11, a Microsoft representative said. 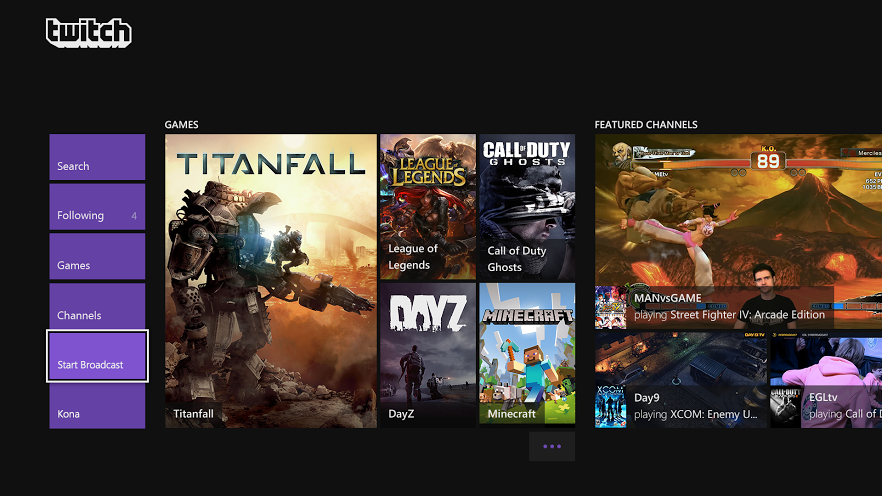 Twitch broadcasting functionality for PlayStation 4 was available from the launch of the system last year. Following the console's launch, Twitch revealed PlayStation 4 owners were responsible for 20 percent of Twitch broadcasts from Dec. 23, 2013 to Jan. 3, while over 1.7 million streams had been broadcast through Sony's console during that period.

The Twitch app on PS4 will offer a few key differences when compared to its Xbox One counterpart. Sony's investment in game streaming resulted in the creation of a button on the PS4 controller to allow gamers to start streaming their gameplay almost instantly. Users can additionally activate or mute their mic to record commentary, mute in-game audio, make commenting visible and send links directly to social networks. Another key difference is the introduction of On Live from PlayStation, Sony's app for viewing streams on the console, only allows users to watch broadcasts coming from PS4 systems.

Comparatively, Xbox One's Machinima video system will feature videos that are exclusive to the console, while the Xbox One Twitch app will offer full-screen broadcasts and viewer statistics, as well as in-app achievements only on Microsoft's system. Video archiving will also be exclusive to the console, while Twitch's Xbox One app allows you to view streams regardless of their original source.

"From the broadest perspective, live video is becoming the social connective tissue in the gaming community," vice president of marketing for Twitch Matthew DiPietro told Polygon last year. "The way families use Facebook, gamers are using Twitch. Watching gameplay has been a part of the game experience since the very beginning, since I was 8 watching my brother play Space Invaders on Atari. This has always been part of the experience. We just have taken it and put it in 2013, in a world where we have broadband capability and 24 hour internet.