A Guild Wars 2 player with multiple sclerosis has found inspiration in one of the game's NPCs — a young woman with similar characteristics who is carried through the world by a giant golem.

Player Christina wrote on the Guild Wars 2 forums that she was "overjoyed" to see Taimi, a girl of the Asura race who suffers from a degenerative disease that makes it hard to walk. Tiny Taimi is carried through the realm of Tyria by a golem, sitting in his hands or standing on his shoulders.

Taimi, who can be found in the Vigil Keep area, was introduced in the latest story update to Guild Wars 2. When Christina's friend alerted her to Taimi, Christina wrote that she "shrieked loud enough to wake the dead."

"The initial idea for Taimi started with [fellow designer] Angel McCoy, who had a gifted teen-aged progeny asura in mind," narrative designer Scott McGough told Polygon. "Since showing young people in combat is dicey for our ESRB 'T for teen' rating, we decided that she would always have her golem with her, and if she ever needed to fight she could climb inside and be protected.

McGough added that as Taimi's development furthered, he had the idea of making her golem more than just a fighting companion, and more of one that her welfare depended on.

"From a purely character-driven point of view, it gives the character a past and an obstacle to contend with/overcome, two things that are essential to a good character and good storytelling," he said. "From a game community point of view, it added diversity to our cast of characters and reflected a portion of our player base who either are or know someone with a disability (including myself-one of my best childhood friends was required to wear a leg brace the entire time I knew him).

"First and foremost we wanted to present a character that players could identify with and would enjoy adventuring with, but once we hit on the notion of giving her a disability to contend with, it was also crucial to show how the disability didn't define the character, but instead was a facet of her personality and her worldview," he added. "Seeing how Taimi deals with her disability and how the rest of the world treats her because of it was essential to our understanding of the character internally, and I think absolutely necessary to the impact we wanted the character to have." 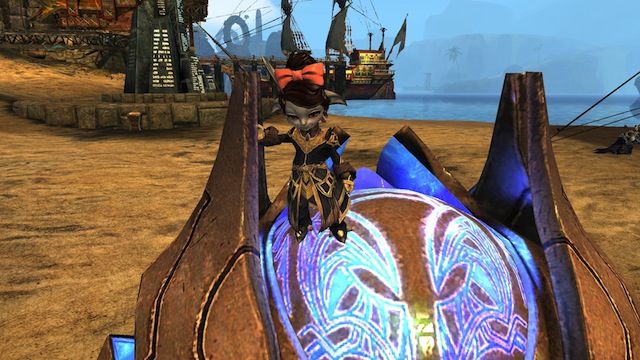 "When I play games, it's usually as an escape," Christina wrote. "I like to imagine that I'm the perfectly healthy Commander Shepard, or some outrageously good looking Final Fantasy character on a quest to save the world with magic. Games take me out of my situation and, for a little while, allow me to be someone else. Maybe this is why I play a hyper-mobile d/d Elementalist. But when you introduced Taimi, I was overjoyed."

"I don't know where you're going with Taimi. But honestly I don't care," she added. "Because now, in Tyria, I can imagine having a giant golem cart me around when I can't feel my legs or when they hurt too badly to walk. Now when I get derisive or pitying looks, I can take a minute to imagine I'm sitting on a golem's shoulder like a complete kitten.

"I was both honored and moved to have elicited such a positive reaction from a player who so strongly identified with Taimi's situation," McGough said of Christina's response. "As a storyteller, it is the kind of reaction you're always hoping to get from your audience, but more importantly, as a fellow human being I was proud to have brought a small measure of joy and inspiration to someone who suffers from a real and painful disability.

"I want to send all of ArenaNet's best wishes to Christina and our fondest hopes for her medical situation to improve. I am overjoyed to have inspired Christina because she, in turn, has inspired me and countless other members of the Guild Wars 2 community with her bravery."

The latest living world storyline update pushed to Guild Wars 2 hit last week, "Escape from Lion's Arch." Players and NPC heroes have been rallying together since Feb. 18 to defend the hub city of Lion's Arch from its most formidable foe yet, the genius Scarlet Briar.