Yoshi's New Island will offer players a break from the perils of babysitting with competitive and cooperative multiplayer modes.

Nintendo's upcoming addition to its Yoshi-fueled series, out March 14 for Nintendo 3DS, is a feel-good game that follows up on 1995's Super Mario World 2: Yoshi's Island and 2006's Yoshi's Island DS. With baby Mario on board, Yoshi and friends adventure through worlds of fluffy pink clouds and underground pipes while fighting off adorable enemies.

Aside from the game's main mode, however, players can pair up for friendly multiplayer matches. We spent some time with two of the game's multiplayer offerings, Flutter Finish and Eggy Pop, during a recent demo in San Francisco.

Like the tale of Yoshi's New Island, both games are simple at heart. In Eggy Pop, we were tasked with egging as many balloons to rack up points within a given time. Though meant to be cooperative, the game sparked our competitive nature. Eggs spewed from a central flower one at a time, and we found ourself dashing in front of our partner to scoop them up first. Once armed, we quickly launched eggs in every possible direction to claim personal victory with satisfying pops. 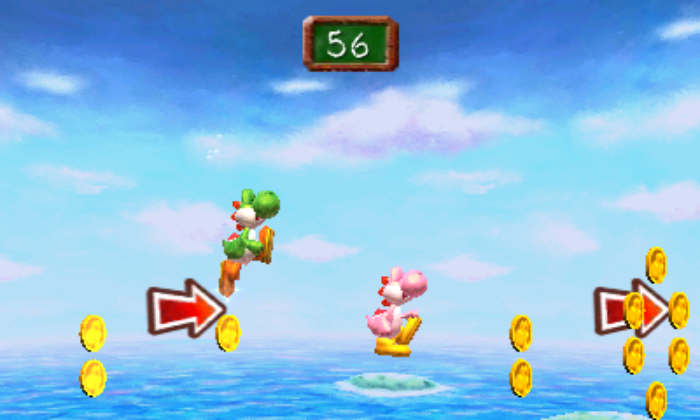 The endurance-based racing minigame, Flutter Finish, provided us with the actual competition we craved. Players use Yoshi's hover and hold abilities to grunt their way across a coin-filled sky. Dropping off-screen and out-of-sight is inevitable, but the player with the highest score — a combination of coins gained and distance traveled — wins.

Yoshi's New Island will include six multiplayer mini-games, four of which have yet to be revealed. Players can share minigames with a friend through download play.