The very moment I walked into the room, I saw it; a Defender machine.

Along the far wall in the bar, there were other arcade games lined up, but my focus, my delight, was entirely directed at Defender, throbbing malevolently at the end of the line. I walked straight up to it, pressed the 1-Player button and breathed in as the game made its beautiful signature greeting; Bwwooowwwooowwwwooooowww.

The bar itself was a converted hotel function room, made over as an entertainment-cum-schmoozing gallery for Vegas conventioneers. I was attending DICE, the annual get-together for video game biz types. Being on site early, I had time to kill. Hardly anyone else was in the room, just a few people sat at a smoothie bar behind me, lounging on rotatable chairs, sipping drinks made out of strawberries.

So, I was free to play this brilliant, energizing, baffling and infuriating game at my leisure.

I did okay, four or five levels, 40,000 points, give or take. Annoyingly, I died with a couple of smart bombs unused. Back in the early 1980s, when I played this game every single day, I could generally score around 100,000 points. This did not make me a particularly good player, but then, Defender is a challenging game.

"You got some nice moves there."

A voice behind me.

When I turned around to see a man at the smoothie bar, smiling, I recognized him immediately, though we had never met. Eugene Jarvis, creator of 1980 arcade space shooter Defender, in my view, the greatest action game ever made.

I abandoned the machine to sit at the smoothie bar and have a chat with Jarvis. He was at DICE to pick up a lifetime achievement award, and to talk on a panel about how game creation has changed in the last 30 or so years.

All I wanted to talk about was Defender, the minutiae of it, the space-ship design, the difficulty curve, the sound effects, the inspiration behind smart bombs, the bit where you lose all your "little men" and the entire universe explodes in a glorious miasma of ultra-violence. 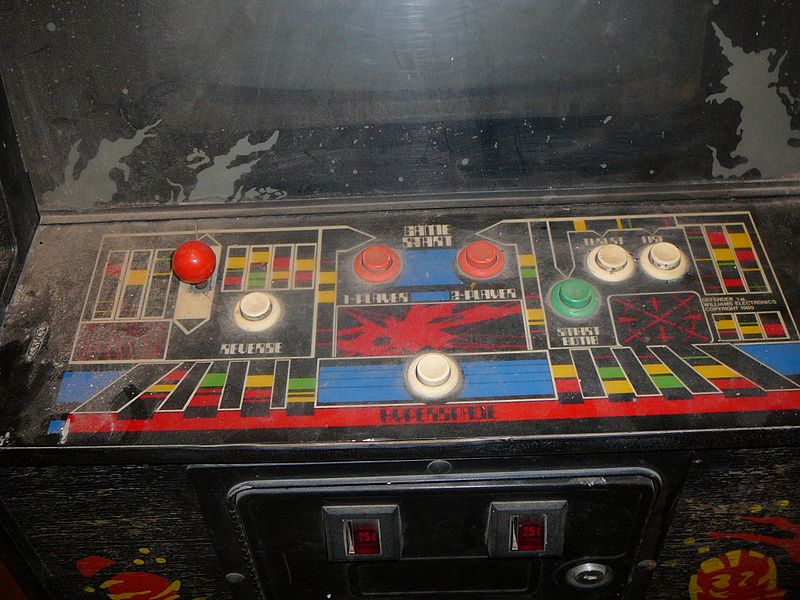 Generally, I don't go in for nostalgia. It's the gasping trout of emotions, writhing around on the grassy riverside, out of place and not quite alive. I'm wary especially of nostalgia linked to events that took place in the sexual awakening of mid-teens (I was a late bloomer). Too many guys have never quite been able to escape the songs, movies, books, even crushes of that time in their lives.

I'm aware, also, that there is an inherent irony in being 14 and dearly attached to a frantic joystick waggler in which 'shoot' and 'thrust' are the two most important buttons, one in which the game often concludes in a dizzy fuzz of ecstasy and shame.

My regard for Defender is not about wanting to be 14 again (it was pretty shitty first time around, truth be told.) I play it now, not to recapture lost days, but to challenge myself against its genius.

There are other games from that era that I still sorta enjoy (Frogger, Galaxians) but most of them bore me (Space Invaders, Asteroids). Only Defender provides real, deep pleasure. There are few games that are just as good now as they were 30 years ago, that have not been superseded by better design or better technology. Defender is unimprovable.

Jarvis is still active in the game industry, president of a company called Raw Thrills. At DICE he was on stage with other award-winners who were not yet born when Defender was released. Those guys are living and working in an age of creative experimentation and artistic freedom, but it's fair to say that the possible horizons of 1980 were vastly more distant than they are today. Defender did things that had never been done before, took risks, in the name of art, that were reckless. 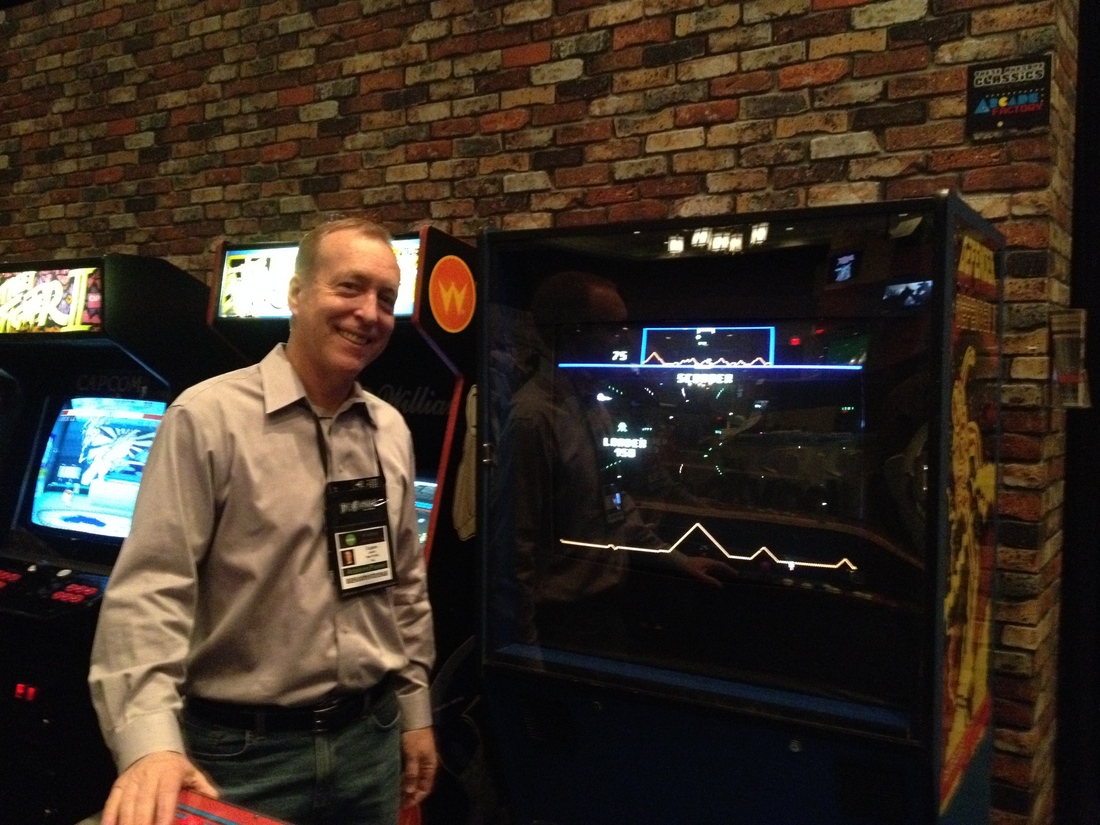 When the Williams game was first shown, at a trade convention, it was widely deemed to be a flop.

"There were a lot of middle aged guys, buyers," recalled Jarvis. "Very few people at the convention even played the game because it was so intimidating. Some would try to play it like it was a sideways Space Invaders. They would just go up and down and then they would die."

Jarvis refused to attend the first test in a real arcade. "I was afraid that it would bomb," he said. "It's like being a comic and dying on stage. You watch people look at the game and then walk on and it's devastating and so depressing. You have spent all this time on the game and killing yourself to create this thing and then nobody gives a shit. That was my fear."

But on the streets, it was a far different scene than the convention disaster. The arcade kids were immediately enthralled. Its speed and noise and difficulty, the things that had baffled the suits, were exactly what the gamers had been waiting for.

"The kids were on that game so quickly," said Jarvis. "I showed up on the second night and there were people crowded around and mesmerized. They were getting smoked for the first few days but it didn't take long before they were way better than me." 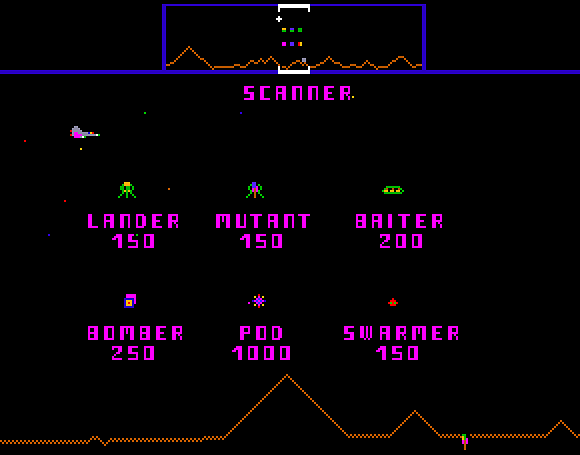 In Defender, the player moves rapidly along a 2D plain, killing little green Landers which try to pick up the men on the ground. Mutating with the little men allows the units to become much more dangerous, juddering and evading your ship. firing off bullets in a fashion that is difficult to predict. There are also a motley of other enemies,each with their own styles and personalities; Pods, Bombers and Swarmers.

In the original design, the only units were the Landers, "It was too bland," said Jarvis. "It was like making a soup and just putting great steak in water and, oh man, this needs something more, so I threw in some carrots and some onions. I was continually sampling and always wanting to put more stuff in. That was a lot of the motivation, to make a game that would be fun to play for days and months."

Another unit, loathed and feared by all Defender players, is the Baiter. It shows up at the end of each level, just as the player starts to feel some relief at clearing a screen. "There is always the need to continue the pressure on the player," he explained. "Once they were down to the last few enemies on a level they could just dilly and dally about. There was no tension or pressure on the players."

Baiter moves extremely quickly and is hard to kill. "It's a very interesting unit, almost flat," Jarvis said,. "It's only two or three pixels, super hard to hit. Vicious."

I remember sitting on my school bus next to my best mate, who was describing Defender to me for the first time. I had never seen it. He mentioned the green button, the "Smart Bomb" that could kill every character on-screen in one go. I thought such a thing sounded improbable. I called my mate a bullshitter. Only when I played the game that night, at a launderette / video store (Betamax AND VHS sections) owned by a bloke from Pakistan, was I finally convinced.

When I told this story to Jarvis, he laughed. The Smart Bomb, he said, was originally going to be a super-targeted weapon to get rid of one unit at a time. "It came from the frustrations of playing early versions of the game. It's just so fast and there's so much shit out there, we just needed to be able to get rid of it all.

"It was inspired by military smart bombs which are very targeted and precise. You would press the button and the missile would go and kill this one enemy, but by the time it got to the enemy you were three screens over so we were like, this is stupid, how do we make this relevant, what makes this useful and easy? Well, just blow everything up. It's so simple."

Smart Bombs were an innovation. Jarvis added that he now views them as "almost like the first virtual good, something valuable that people would hoard." Certainly, their strategic use is a key element in surviving more than a few levels of the game.

But there is one aspect of Defender during which, even armed with Smart Bombs, survival is all but impossible. When all of the little men are gone, the world of Defender collapses in upon itself triggering an orgiastic wave of violence towards the player. It is the zombie apocalypse of early space shooters. The difficulty curve shoots north at a 90 degree angle.

Jarvis introduced this eye-bulging cataclysm in order to "add some drama" to the end game. When the little men you are protecting are dead, the game is over, but he wanted it to go out with a big bang. Of course, there are players who actually like playing the game in this mode, but they are a hardy and rare breed of individuals. The cataclysm is still one of the most remarkable moments in gaming, way ahead of its time.

Jarvis was living in a commercial environment when games needed to instantly hook players, and offer them a chance of mastery with much practise. Although the number of games available was comparatively limited, it was fiercely competitive. Most arcade games failed to make money, failed to dislodge the standards and favorites already installed.

Defender was something new and dangerous. It took the best elements of Space Invaders and Asteroids, and threw away the things that make those games, to us, seem pedestrian. His later work, including Robotron, NARC and Smash TV, were also provocative and, like Defender, command loyal adherents today.

Jarvis was a pinball guy who knew how to program, and knew the kinds of games that would challenge players "I wanted to make a game that I would play," he said. "I was in that place where I was the same as the players. What they liked, I liked."

His advice for game developers today? "Respect the power of natural systems like physics, and simple AI rules," he said. "They form amazing, beautiful and complex games where naturalistic and random forces are unleashed, as opposed to trying to control everything. Many of the most beautiful things in Defender are the result of rules based AI, physics and algorithmic explosions and particle effects which come together to make a complex world with infinite variety far beyond any human created script."