Murdered: Soul Suspect offers a ghost in the AAA machine

Share All sharing options for: Murdered: Soul Suspect offers a ghost in the AAA machine

Jigsaw puzzles demand that the player seeks out different pieces, touches them, arranges hierarchy and order from the chaos.

So it is with Murdered: Soul Suspect, a Square Enix investigation game with supernatural elements. It's essentially a point-and-click adventure in a 3D world, with a heavy narrative bent and some sprinklings of action sequences.

You play as a dead cop, Ronan O'Connor, investigating your own murder. As in all whodunits, you mooch around crime scenes, click on stuff that looks interesting (a gun or a note, say) and these are added to your inventory.

Once you have sufficiently stripped a scene of its clues, you are obliged to tell the game which ones you consider to be most relevant. Choices made successfully, a picture emerges and you are allowed to proceed. 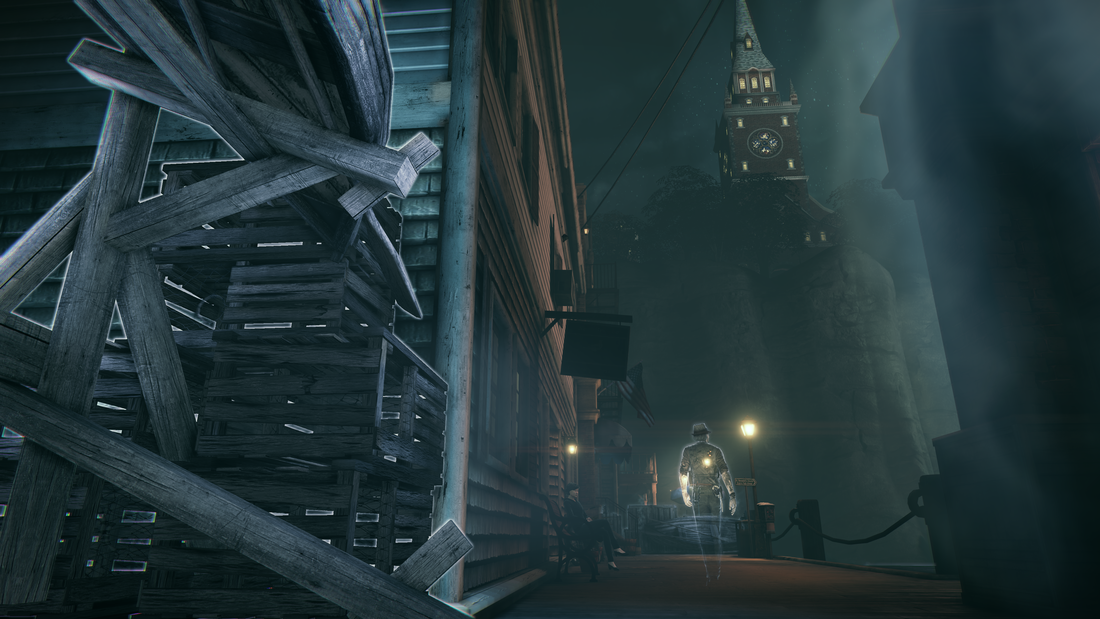 This is where lots of other supporting mechanics come into play. As a dead person you are able to inhabit the bodies of the living and influence their actions, through choice options (press X to read her mind) or dialog trees.

The afterlife you inhabit takes place in the real world of Salem, Mass., with its modern-day denizens going about their dreary business, unaware of the spectral world of ghosts and ghostly artefacts that you can see, a community of the dead with whom you can also interact. This allows the main character to form relationships with interesting dead people, adding a spooky layer to the game and a bunch of side-quests, like 'please find out how I died a hundred years ago by picking through all this ghost trash that you see.'

Some of the ghosts are downright unfriendly and will kill you. They are to be avoided through a Dishonored-style stealth system or killed via very rudimentary combat techniques. Stealth is the most enjoyable path, especially as it allows the player (and the pursuers) to have some fun ghosting through walls and chasing each other inside the humdrum lives of the oblivious living.

It all, ultimately, comes back to walking around rooms, bending over stuff and having a closer look. Anyone who played L.A. Noire will be familiar with this crime-scene investigation stuff. Matthew Brunner, chief creative officer at developer Airtight Games said he had played L.A. Noire and enjoyed it, but wanted to avoid the frustration many players felt, wandering endlessly around, seeking out some new clue.

"We made it much easier for the player to uncover the elements around them," he said. "For the most part you can find and uncover the clues relatively easily, it's more about figuring out what they mean and paying attention to their relevance." 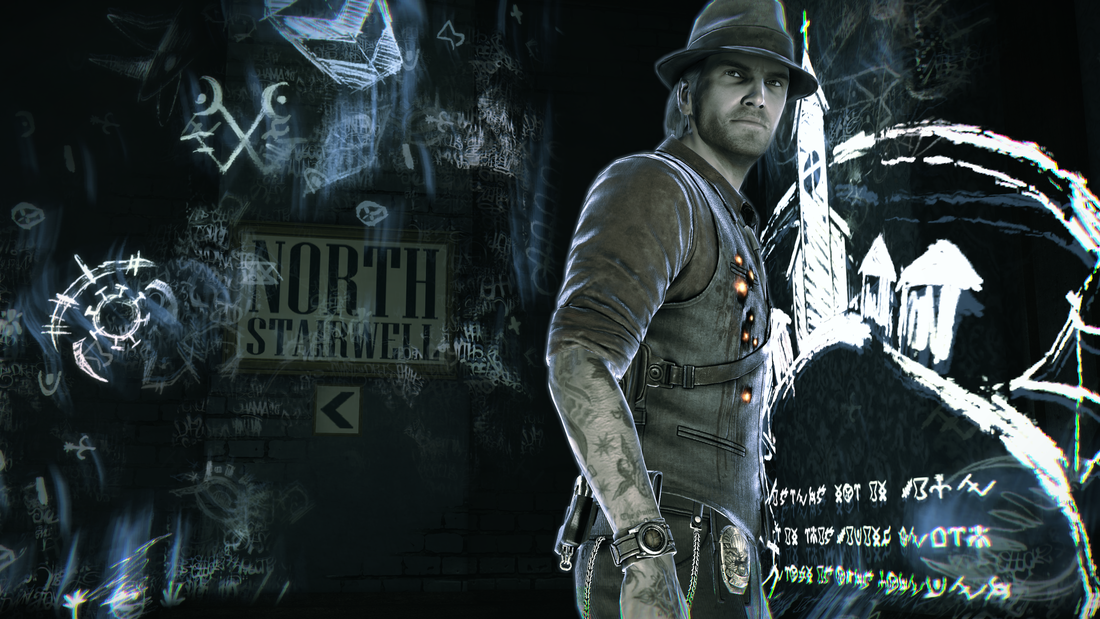 As well as obvious comparisons with L.A. Noire's investigative systems and Dishonored's stealth sequences, there are other elements of the game that feel familiar. The spectral artifacts that shimmer in the world, call to mind BioShock Infinite. The 'difficult mentor' relationship between O'Connor and a teenage girl is also something that seems to have been explored a great deal of late, such as in The Last of Us.

"There is always this zeitgeist where things appear and you wonder if everybody is on the same wavelength," said Brunner.

It's no surprise that these ideas keep occurring. The extra layer of in-game reality adds, literally, a new dimension, allowing game designers to offer alternative routes through their worlds, added illusions of choice. A strong female secondary character allows game makers to explore diversity on their terms, without facing what publishers generally view as the commercial risk of creating an original female lead in the game. (To be fair to Square Enix, it does publish games with female leads.)

O'Connor himself is a white man, good-looking, nattily dressed, roughly bearded, competent, tough, surly, passionate and kind to women. He is, in other words, a conventional video game leading man.

"Character development is probably the first and most difficult problem when you are developing a game," said Brunner. "If you don't get that right from the start it just cascades through the entire project. We spent a lot of time developing our character and casting and speaking with actors." 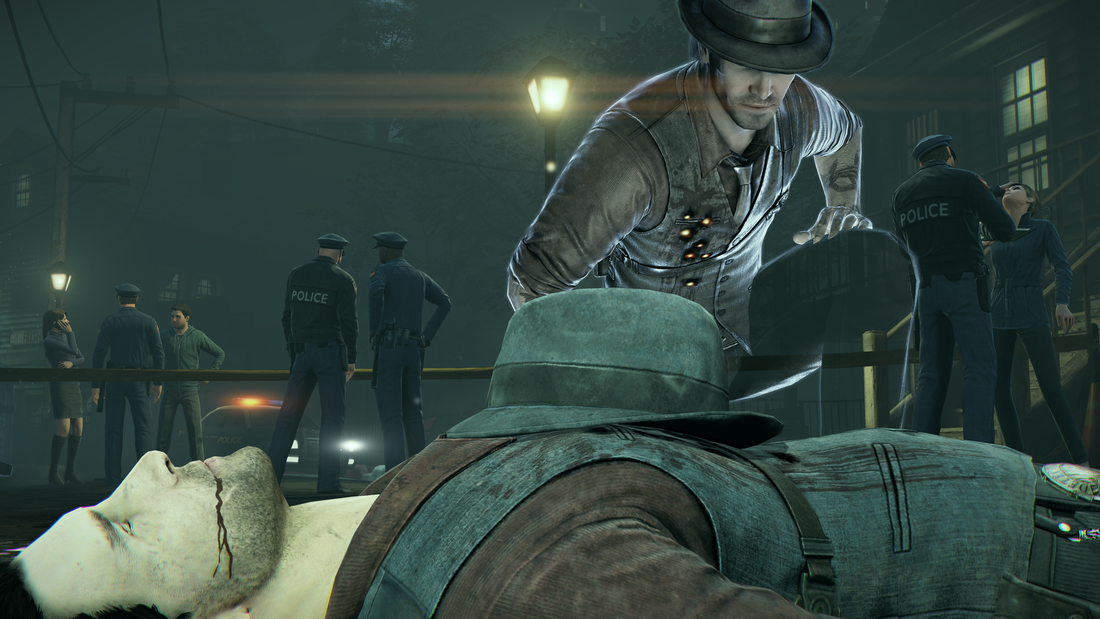 Lead writer Doug Van Horne told Polygon that the team sought a "visual appearance and performance style mixing the notions of an honorable, distinguished lawman with the chaotic and self-destruction nature of a criminal." He added that O'Connor is "an anti-hero who is unable to escape or hide his past wrongdoings."

We see O'Connor's dark past on his heavily tattooed body, that summon episodes from his past, as well as through collectibles in the game, that players can string together to create a deeper backstory.

There is one element about the character that strikes a wrong chord, which is a cigarette he always seems to be smoking. Clearly, this is meant as an identifier. It's a device that signifies devil-may-care rebellion and noirish depth. And it plays as a joke on mortality. But during a violent fight the cigarette stays clamped to O'Connor's lips, and its presence feels like a clumsy graft-on, at least during the early levels.

Brunner conceded that the cigarette was problematic. It had been decided, early in the project, to give the character this prop, and so its use is most prevalent in scenes created at the start of development, mostly those that take place at the beginning of the game.

"When we were first developing the character [Yosuke Shiokawa] the creative director was looking for some very strong iconic elements that would always be linked to the character and the cigarette was one of them," he said. "At the beginning one of the rules was that he can never be without the cigarette. We discovered over time it didn't work as well as he had hoped it would. As the game progresses it kind of disappears."

Murdered: Soul Suspect is a next-gen narrative-heavy game that seeks to tell its stories through some other device than combat. Although there is fighting, the central mechanic is about looking at stuff, talking to people, making connections between facts, narrative strands and characters. It offers an alternative to adventures in which aiming and shooting a weapon is the primary route to success.