Call of Duty: Ghosts players on Xbox 360 and Xbox One will be able to play as three of the first-person shooter series' villains beginning March 4.

According to a post on One of Swords, the $3.99 Makarov Legend Pack will bring Call of Duty: Modern Warfare 2 terrorist leader Vladamir Makarov to Ghosts. Beyond the facelift, Makarov's Personalization Pack also includes weapon camo, patch, reticle, playercard and background. Two other villain-filled Personalization Packs will also be available for $1.99. They'll include Modern Warfare 2's Imran Zakhaev and Ghost's Gabriel T. Rorke. If bad guys aren't your style, you can engage in multiplayer battle in a $1.99 camouflage hazmat suit. 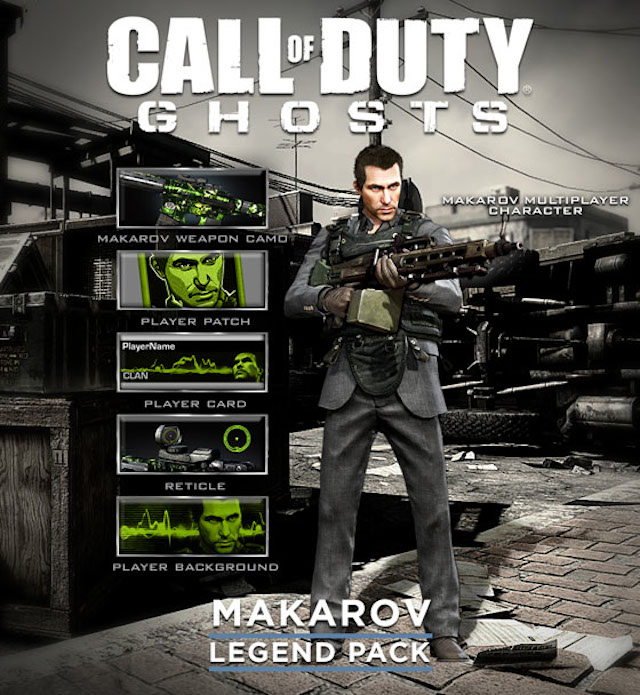 Call of Duty: Black Ops 2 will also receive four new Personalization Packs next Tuesday for $1.99. Each includes a weapon camo, three reticles and an animated calling card. Their names offer clues to their unrevealed designs. Beast is "inspired by nature's most lethal predators;" Dead Man's Hand has an Old West gunslinger and card player theme; Octant is for racing fans; Weaponized 115 is based on developer Treyarch's zombie-filled Origins mode from Call of Duty: Black Ops 2.

The Personalization Packs will be released for other platforms at a later date. Next week's releases are just the latest in a series of Personalization Packs for Ghosts. A trailer last week received Captain Price and space cats. Last week also saw the release of four weapon customization packs.

For more on Call of Duty: Ghosts, be sure to read and watch our review.