How is 'ethical' free-to-play Path of Exile faring?

Share All sharing options for: How is 'ethical' free-to-play Path of Exile faring?

When action-RPG Path of Exile was launched last year, developer Grinding Gear Games was clear. It would be an "ethical" free-to-play without any compromises to the evils of pay-to-win.

That meant no XP boosts or weapon upgrades, just for flashing a credit card. No expensive steeds or portals for fast-traveling. No intrusive ads and invitations to spend money on fancy new characters.

So how has the Diablo 2-style game been faring in the rough and tumble of the actual, open market?

Pretty good, it turns out. The New Zealand developer boasts over 5 million registered players with "hundreds of thousands" playing at any given time. Its first major expansion, Sacrifice of Vaal, is out next week.

"We probably would be making more income if we were pay-to-win," said lead programmer Jonathan Rogers. "But the game is doing very well. We paid off our development costs, the company is making enough money to expand."

Sacrifice of Vaal adds extra PvP content, a new race of dark-magic wielders and the ability to charge up super-powered weapons by killing monsters. But there will be no change to the game's low-key monetization policy.

"We would never want to compromise the game," said lead designer Chris Wilson. He added that gouging and persistent monetization policies generally hide game mechanics that are built around profits. The only way to win with a non-intrusive approach is to "make a really good game that people love to play." 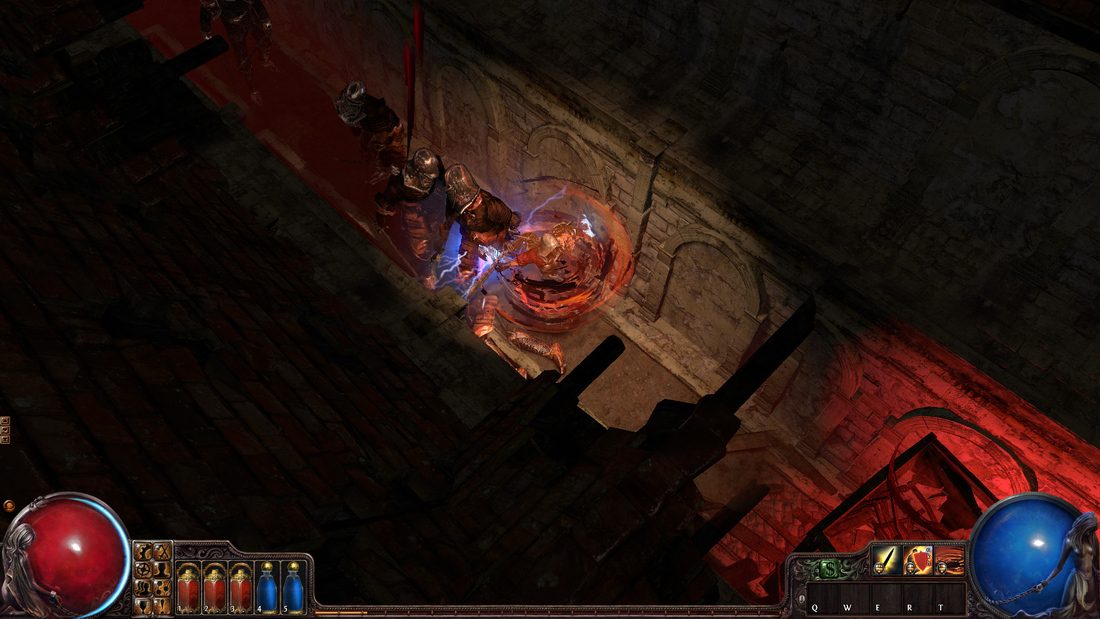 Path of Exile is profitable because it can rely on the good will of its players, and the actions of a small percentage of players who are willing and happy to pay for cosmetics.

"Some people love cosmetics," said Rogers. "They love to show off. There comes a point when you play a game a lot that it ceases to be a game and it becomes a hobby, and laying down extra money for a hobby is not so strange. It changes the relationship with the game, makes it more personal."

Items for sale range from clothing and visual effects for $1.50 to $7, right up to pets (they confer no benefit to the player, other than vanity) that cost over $100. "We have a big blue scorpion for $110," said Wilson. "We've sold a few hundred of those."

Very handy income, but it's the $1,000 packages, that include physical goodies and digital extras, that are especially popular among fans. These allow players to personalize their characters in-game, and themselves in real life. Grinding Gear has brought in half a million dollars through these packs.

When it launches, Sacrifice of Vaal will be available in game worlds where players have amassed highly developed characters, as well as on fresh servers, where everyone gets to begin anew. Vaal areas and new monsters will be available throughout the game, rather than in a separate enclave.

According to Wilson and Rogers, who began making the game as a hobby, eight years ago, the core principles behind their creation won't change.

"On day one, back in 2006 when we began work on this, we wanted it to be free," said Rogers, "Free-to-play wasn't a thing at all in the west. It was just something that we really believed in."

They understood, even then, that pay-to-win would likely corrupt free gaming, although not to the extent that it has, most especially in mobile gaming. In a away Path of Exile is a vindication of their particular view of free-to-play.

"We thought about how we would react to it and we knew we would hate it," said Rogers. "I don't like how some people are so accepting of it. It's bad. It influences the game design in a negative way. As soon as you tie your game design to your monetization, it affects it. If you can buy a boost of experience, how is that separating gameplay and monetization?"