iOS 2D eat-‘em-up Tasty Tasty Grandpa is a metaphor for life told through "cute" cannibalism mechanics, requiring players to partake in a healthy dose of cannibalism before they themselves are "metaphorically devoured."

But while the game has a metaphysical theme, its creator Craig Duturbure tells Polygon thatTasty Tasty Grandpa doesn't necessarily require a deep level of thinking and was created make to make people feel joy. "There are themes in there that most people won't question, and I'm happy for that — just enjoy playing! But if you want to look into it, there's more," Duturbure explained.

"You don't need to think about it on any particular level to just enjoy the absurdity of eating people in one gulp and trying to avoid being eaten yourself," he said. "The tension of a creepy baby about to attack you, the thrill of dashing backwards or forwards to avoid the attack, and the satisfaction of eating someone and growing to the next age — these are all the simple, fun things we hope players will feel."

The title is set in a perpetually rotating Elizabethan Theater carousel — inspired by Shakespeare's line "about all the world being a stage, and people strutting their hour on it and then disappearing," according Duturbure— where the player's goal is to grow old to the point of death. The team aimed to keep the controls as simple as possible for touchscreen devices where players use swipe and tap gestures. Players start the game as a baby and must eat those older than them to "level-up" into a different age group. The older a user gets, the more younger people are out to get them.

"They're after your jobs, they take your place in nightclubs, they fill all the places in your life that you used to fill," he said, explaining the metaphor. "And then those younger people get older themselves, and the same thing happens to them."

"You don't need to think about it on any particular level to just enjoy the absurdity of eating people in one gulp."

Duturbure began his game development career in 1993 designing games for the Super Nintendo and Sega Genesis. He worked at major Australian games studios over a 17 year period developing titles across numerous genres on most consoles.

"Then the larger scale Australian games industry collapsed," he said. "In amongst the ashes, curled up in a bird's egg, it dawned on me that I got into the industry to make my own games, and none of the companies had ever let me make my ridiculous ideas a reality. So I rose from the ashes, started Grapple Gun Games, and here I am. When we release Tasty Tasty Grandpa, I guess we'll see if all those companies were right or wrong. I'm kinda betting everything I have on ‘wrong'." 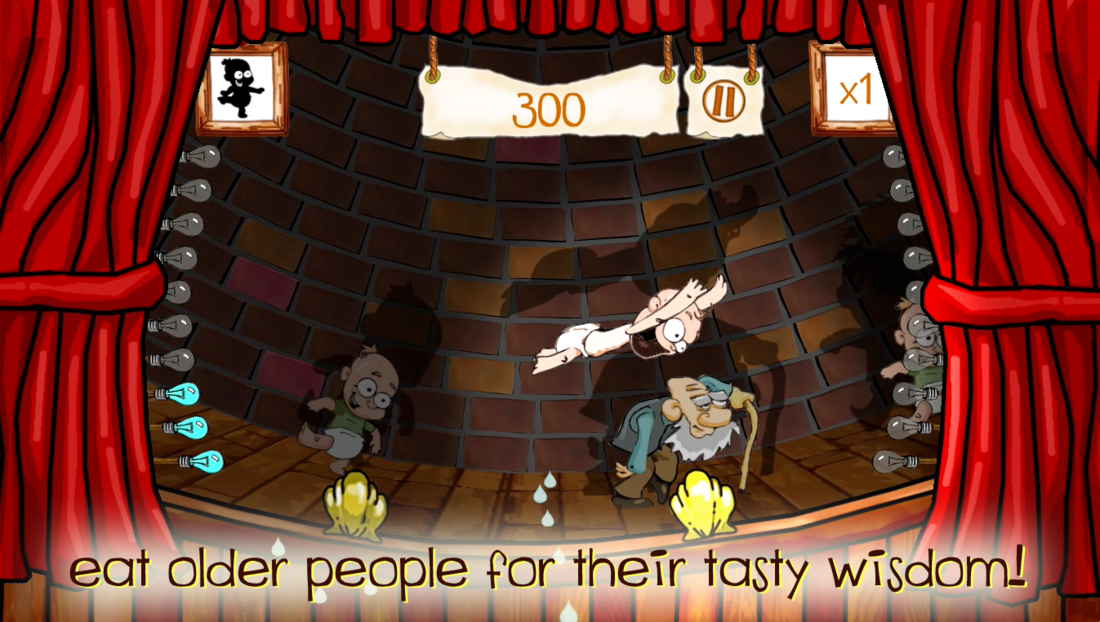 "The satisfaction of eating someone and growing to the next age — these are all the simple, fun things we hope players will feel."

"But it turns out that when you're working for nothing in whatever time you can spare, that time can get pretty easily chewed up," Duturbure said. "Damian had to deal with Queensland getting flooded, others had to deal with crazy deadlines in their day jobs which increasingly crept into being their night jobs. And things happen in family life that can take up free time or leave you feeling drained enough as to make that time unproductive."

Featuring a "really oddly-timed and quirky" saxophone quartet soundtrack, written and recorded with live saxophones by Matt Christensen, Tasty Tasty Grandpa is coming to iOS devices on March 27 for $0.99. As something Duturbure feels strongly about, the game won't include ads or in-app purchases, which he jokes "will probably sink the game and you'll never hear from us." 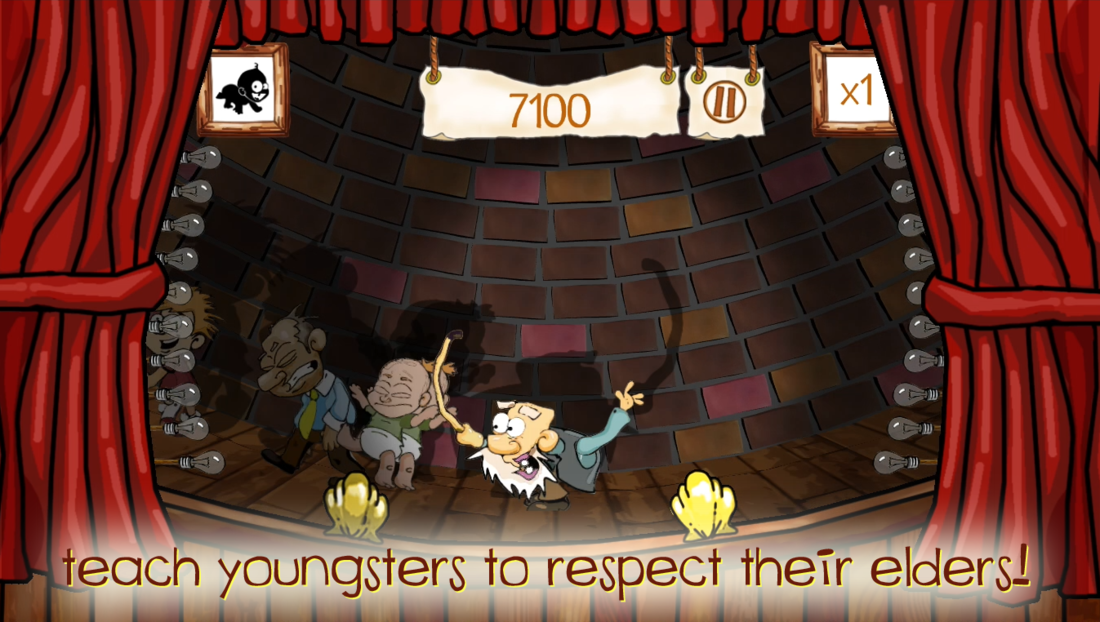 "I just want to make the kind of game I like, and I really don't like being harassed in my entertainment to buy things, nor do I like games getting progressively less fun until I pay money," he said.

The team already has extra content planned once the iOS 2D eat-‘em-up starts seeing returns so they can continue developing the game. While they plan to keep some of that under wraps for the time being, possible content is to introduce a playable female character with the introduction of the Grandma set.

"I really don't like being harassed in my entertainment to buy things, nor do I like games getting progressively less fun until I pay money."

"The current game represents only one character, at different stages of life, with all life stages appearing simultaneously (we're not afraid to be metaphysical!)," Duturbure said. "So the Grandma version will be one female character at all stages of life. We'll be working some gameplay changes in there too, so the update will pack even more fun into the game."