Sinister controller looks to ease the horror of WASD

Share All sharing options for: Sinister controller looks to ease the horror of WASD

On the migratory road from consoles to PC there is a place of desolation where many gamers fear to tread. It is marked with the dread letters WASD.

If you are like me, someone more comfortable playing action games with a controller than with a keyboard, this place can be avoided. Many action games come with controller functionality. There are alternative devices from specialist companies. But still, WASD dominates PC gaming. It is always there, just on the horizon.

This is not to suggest that WASD, the keys for movement in PC games, is inherently wrong (nor their alternative, arrow keys). But, unless you are well acquainted with this control scheme and its attendant servant buttons, there is a temptation to consider that controllers were made for gaming, while keyboards were not.

If you suffer from carpal issues (I'm a martyr to my median nerve) the prospect of curving left hand over these buttons is a pure terror, like strolling into Jamba Juice, pushing aside the insufferable serving staff and jamming your hand into the whirring machine that liquefies bananas.

One company is looking to provide a new kind of control scheme for gamers who want the precision of aim offered by the mouse, as well as a more controller-like device for movement, an alternative to WASD.

Sinister from Toronto-based Tivitas is like an Xbox One controller that has been exploded and then magicked back together again by a delirious mage. Take a look at your hand. Imagine the heel on a stabilizing platform, your palm on a haptic-feedback pad, your thumb on a thumbstick and your fingers on a four-button formation with side-buttons in close-proximity. 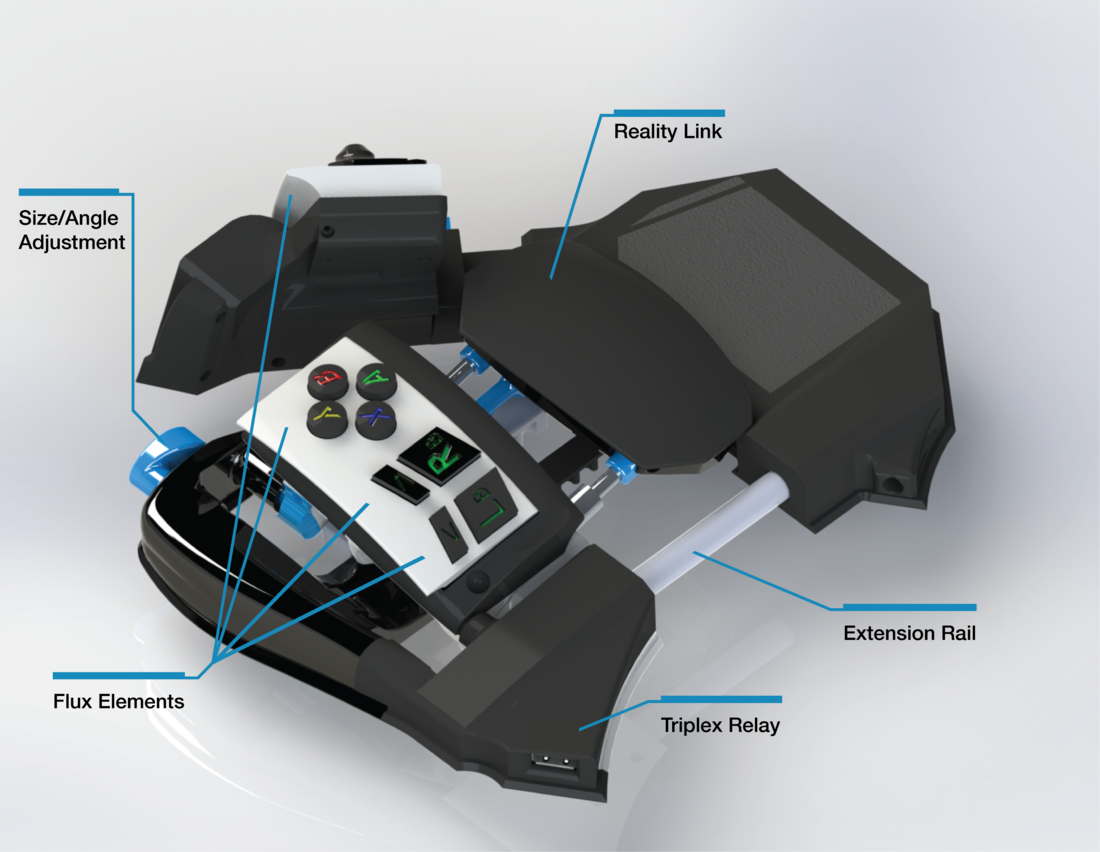 It sounds like just another way to do yourself a nasty injury but, in reality, it's basically a console controller for one hand, leaving the other hand free to use the mouse. Sitting in a San Francisco hotel suite on Friday, I ventured forth in Crysis 3, using the device. It would be a brazen lie to say that I was immediately flowing through the game, like a pint of yogurt poured into an ant farm. At first, it felt awkward, though not uncomfortable. After a while, it started to make sense, but I was still unconvinced.

The gadget's inventor and Tivitas CEO Chris Zhao-Holland interrupted me to make a suggestion. He began taking the component parts of the device apart, unlocking the thumbstick and the button pad and rearranging them. They snapped into new places using magnets.

Now, the thumbstick was at the end up my fingertips and the button-pad was beneath my thumb. This felt better; a purely personal preference. Zhao-Holland and the PR guy debated which way around they liked the configuration for various types of games. The point is that this is a gamepad that can be taken apart and reconfigured very easily.

"I have been a console gamer all my life," said Zhao-Holland. "I wanted to transition to PC, but I found that going from a nice, simple controller to two devices, one of which has 102 keys ... the learning curve was too hard."

He tried some of the mini gaming keyboards and devices on the market but found none of them to his liking. In any case, being the sort of fellow who likes to build things, the challenge was too good to resist. The current prototype took a few months to build.

Obviously, you could use a controller with one hand, although this is fiddly and does not work with many PC games. With Tivitas, the mouse plugs into the device. It works with any WASD or controller game, without the need for drivers or downloads.

The haptic feedback pad is provided by Bayer MaterialScience subsidiary Artificial Muscle and is called Vivitouch. It's lighter, smaller, quieter and more energy efficient than rumble devices and offers a more targeted haptic feel. A bullet shot feels a lot different to a sword clanging against a shield, or a long fall.

The device allows players to input the kind of game they are playing in order to get the right feel; so there are options for a shooter or an RPG. Although not available in the demo, Tivitas is planning for this to come in the form of an LCD screen.

For the Vivitouch people, getting sign-up from independent device makers is part of a longer term plan to woo the console manufacturers. "We need people to leverage our technology," said Dirk Schapeler, president and CEO of the company. "Just putting it in existing hardware and saying it's a little better than your rumble motor, that doesn't make any sense."

A final build of Sinister is targeted to arrive before the end of the year. However, a Kickstarter is being launched this week that aims to get prototypes out to backers. Prices are in the $80-$120 range.

"This is a very new concept," said Zhao-Holland. "We want to get it into peoples hands so they can try it and provide feedback."