DayZ, Dark Souls and the pleasures of being a jerk online

Share All sharing options for: DayZ, Dark Souls and the pleasures of being a jerk online

Our actions towards others when we play games online aren't just throwaway motions. If we consider video games to be something more than mindless distractions, then our interactions with other humans are to be taken seriously. They matter.

If that’s the case, being an asshole in an online video game makes someone else's real life measurably worse, and it makes you an asshole in the real world for doing it.

There was a door on the outside of the "Roundhouse" map in Call of Duty: World at War that players could jump through to glitch under the map, after which they could run around shooting people from beneath the ground without fear of anyone shooting them back. My friends and I would be having a lovely evening of World at War multiplayer, and then Roundhouse would come up in the map rotation, and our good time would be dragged to a screeching halt.

I’ll go so far as to call griefing evil when you boil it down, whether it’s the small-scale griefing of preventing your team from winning in a game of Halo capture the flag by stealing the other team’s flag and refusing to return it to your base, or the large-scale grief of interrupting an in-game funeral held by World of Warcraft players to honor the death of their friend in real life.

I like to think I can pick up on the pain of others fairly quickly, and I try never to be the cause of pain. Sometimes I fail. I never understood the evil of griefing from a first-person perspective however, until I was put into an environment where griefing was the rule and not the exception. I watched myself devolve into a virtual sociopath.

The wisdom of frustration

Dark Souls is a punishingly-difficult RPG. The enemies in the world respawn every time you die. You learn your lessons, and pray that you can make it to the next checkpoint. Some religions teach that self-flagellation is a way to signal your repentance before God for all the horrible things you’ve done. I play Dark Souls when I feel like flagellating myself.

Griefing is a core game mechanic in Dark Souls. Lightweight griefing takes the form of writing misleading messages in the game world for other players to read, and giving deliberately bad advice intended to get players killed. Hardcore griefing in Dark Souls means invading other peoples’ games and killing them. You can find YouTube series dedicated to griefing techniques that run the gamut from stealing players’ resources to resetting entire portions of a player’s level.

Dark Souls players can also choose to assist other players with these mechanics, and it’s that choice which makes the decision to hinder instead of helping a decision to grief. It’s maliciousness done purely for the amusement of being malicious. There is no glitching required. The opportunity is laid out like a welcome mat.

The reputation of DayZ is built on its unforgiving design, and it’s the players, not the zombies, who become the best villains in DayZ stories. Banditry is to be expected in any post-apocalyptic scenario, but DayZ players habitually take things one step too far. The stories are both dark and funny; writer Adam Ruch was captured by a party of DayZ survivors and forced to be their slave. Or take this video of some well-armed DayZ players forcing two freshly spawned characters to fight for the death over who gets to wear a yellow jacket.

That video is striking due to the admission contained within the title, "The Day Z guide to being a prick," and for a statement that the lead prick in charge makes on the video. "This is DayZ, so someone always has to die when players meet," he says.

Actually, no, they don’t. Players could choose to help one another. The "hey are you cool" Tumblr is a record of DayZ players that the author meets, and not everyone is hostile. One of the best stories to come out of DayZ is about Dr. Wasteland, a player who chooses to help other players by providing them medical care.

One could think about griefing in Dark Souls and DayZ the way we can think about sadomasochistic sex practices. Hitting and humiliating people when they don’t want to be hit or humiliated is a bad thing. If someone enjoys being struck or belittled, however, giving them what they’re asking for is perfectly acceptable.

The game gives you the reason, the excuse and the tools

Maybe the poor bastard had just bought a new motorcycle in Grand Theft Auto Online, and wanted to make a quick stop at the mod shop to customize the bike’s paint job before taking it onto the highway and opening up the engine for the first time.

I play Dark Souls when I feel like flagellating myself

I didn’t think to ask before I blasted him in the chest with an automatic shotgun and destroyed the motorcycle with a grenade launcher, because I thought it was funny.

I was repeatedly killed by other players when I took my first steps into the open world portion of Grand Theft Auto Online. I’d respawn a block or two away and they’d already be right on top of me, running me over with a car or scoping me with a sniper rifle. I learned to regard every white dot on the map as a threat, and avoided other players as if I were the nerdy kid who puts his head down to avoid attracting the bullies’ attention.

I eventually got tired of reliving my high school experience, and decided to flip the switch.

Griefing is coded into Grand Theft Auto Online’s DNA. It’s enabled by the ability to call muggers and mercenaries and set bounties on other players, all of which result in a net loss in funds to the griefer, a net gain paid out in schadenfreude. These actions also result in a desire for revenge that spirals all too quickly into incessant and increasingly creative griefing.

I enjoy covering a truck in plastic explosives, picking said truck up with a cargo helicopter, and then dropping the truck into a group of players and detonating the bombs. No one ever sees it coming. It’s hilarious.

Even better is when players go into passive mode, which protects them from being shot, and leads them to believe they’re safe from harm.

They may wise up to the need to stay off the road when they are in passive mode. Then I show them they're not protected from being drowned by the high pressure stream of water sprayed by a fire engine either.

A vehicle exporter regularly requests specific vehicles for players to steal and deliver to him at the shipping docks. I love watching players get to the priority vehicle and drive it away, imagining how pleased they must be to have been the one who grabbed it first, and then detonating my planted explosives. I had actually gotten there first, you see.

This method of griefing generates a constant stream of abusive text messages on Xbox Live. I laugh at each one.

The victims provide the entertainment

I imagine that my victims react the same way I do when I’m on the receiving end. They get angry, they put the game down, and the anger fades away as they return to real life.

They likely carry a little bit of that anger back into the game itself, and when the game seems to support this sort of behavior other players will likely take part, leading to a cycle of misery. I share some responsibility for this state of affairs.

What concerns me is the ease with which I can kid myself into believing I’m not actually being an asshole when I grief someone in Grand Theft Auto Online. It’s so easy to say I’m not doing anything wrong, that this is just how the game was made.

This sounds similar to what I used to read people posting on forums when I read up on the Roundhouse under-the-map glitch in Call of Duty: World at War. 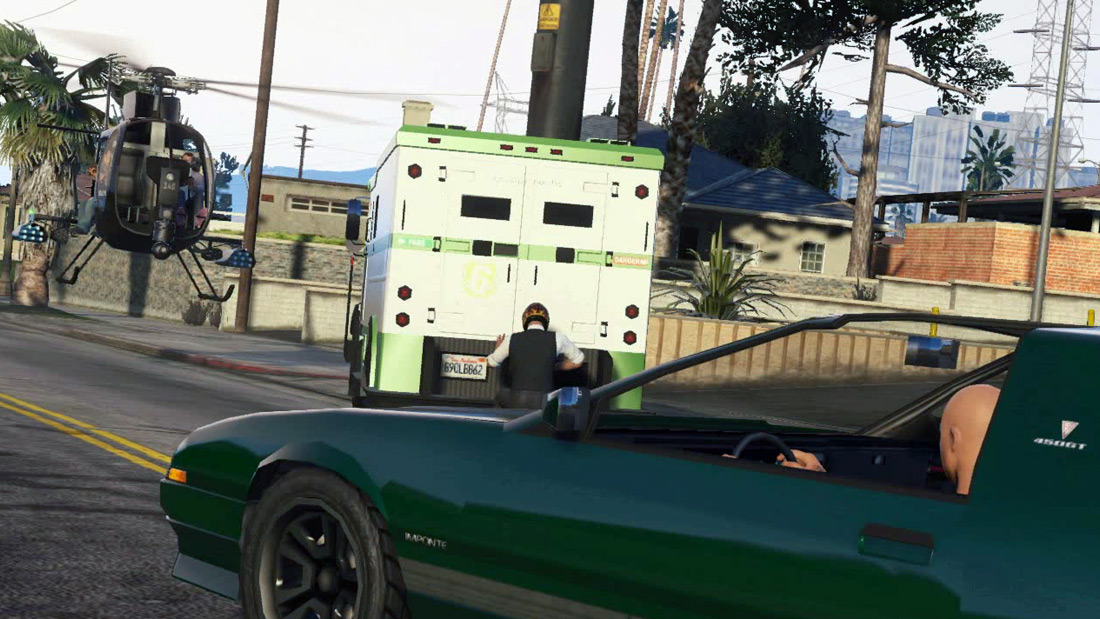 Many of the stories about Rust, a new indie game which takes a page from both Minecraft and DayZ, involve players smashing each other in the faces with axes when everyone’s just trying to gather enough materials to survive. The environment is the real enemy, not other players. Video games that encourage players to treat one another horribly is feeling less like a quirky design facet of a few games and more like a bona fide trend.

This feels like it could be a road to a really dark place, where the video game industry finally lends credence to decades’ worth of fear as to the negative effects playing video games can have on our personalities. All it took was spending time in a single gaming environment where abusing other players was encouraged to degrade my online behavior.

The sensitivity to the pain of others, which is something I cherish, flies straight out the window as I wallow in heaping abuse on people in Grand Theft Auto Online.

I can’t imagine what I’d be like if most of the online games I played were similarly structured to encourage griefing. I think I’d be worse of a person for it, and I wonder how many people would be right there beside me.