The next entry in Rebellion's Sniper Elite series transports the World War II franchise to a new front, Northern Africa, where elite sniper Karl Fairburne will have access to new tactics and tools in the battle against Germany's Afrika Korps.

Tim Jones, head of creative at Rebellion Developments, said Sniper Elite 3 has been "built from the ground up to plug all the holes in gameplay that didn't manage to go as far as we wanted to with Sniper Elite V2." Non-linear gameplay and more stealth options, as well as new weapon customization features, give players more tactical choice than ever before, he said.

In a recent demonstration of Sniper Elite 3 running on PlayStation 4 (the game is also coming to PS3, Xbox 360, Xbox One and Windows PC), Jones highlighted some of those new features, illustrating how important stealth and relocation tactics will be for Fairburne's latest adventure.

Jones worked his way through an encampment set in the Halfaya Pass, a tactically important stronghold for Axis forces during World War II. Sniper Elite 3's interpretation of the pass appears replete with tunnels, caves, foliage and man-made structures that provide plenty of strategic options for the player as they conduct their given mission, in terms of approach and cover.

Compared to your typical run and gun shooter, Jones said, Sniper Elite is all about observing, planning, executing and adapting to your situation. It's a comparatively slow-moving process; snipers must identify and carefully execute their targets, constantly aware of their visibility. 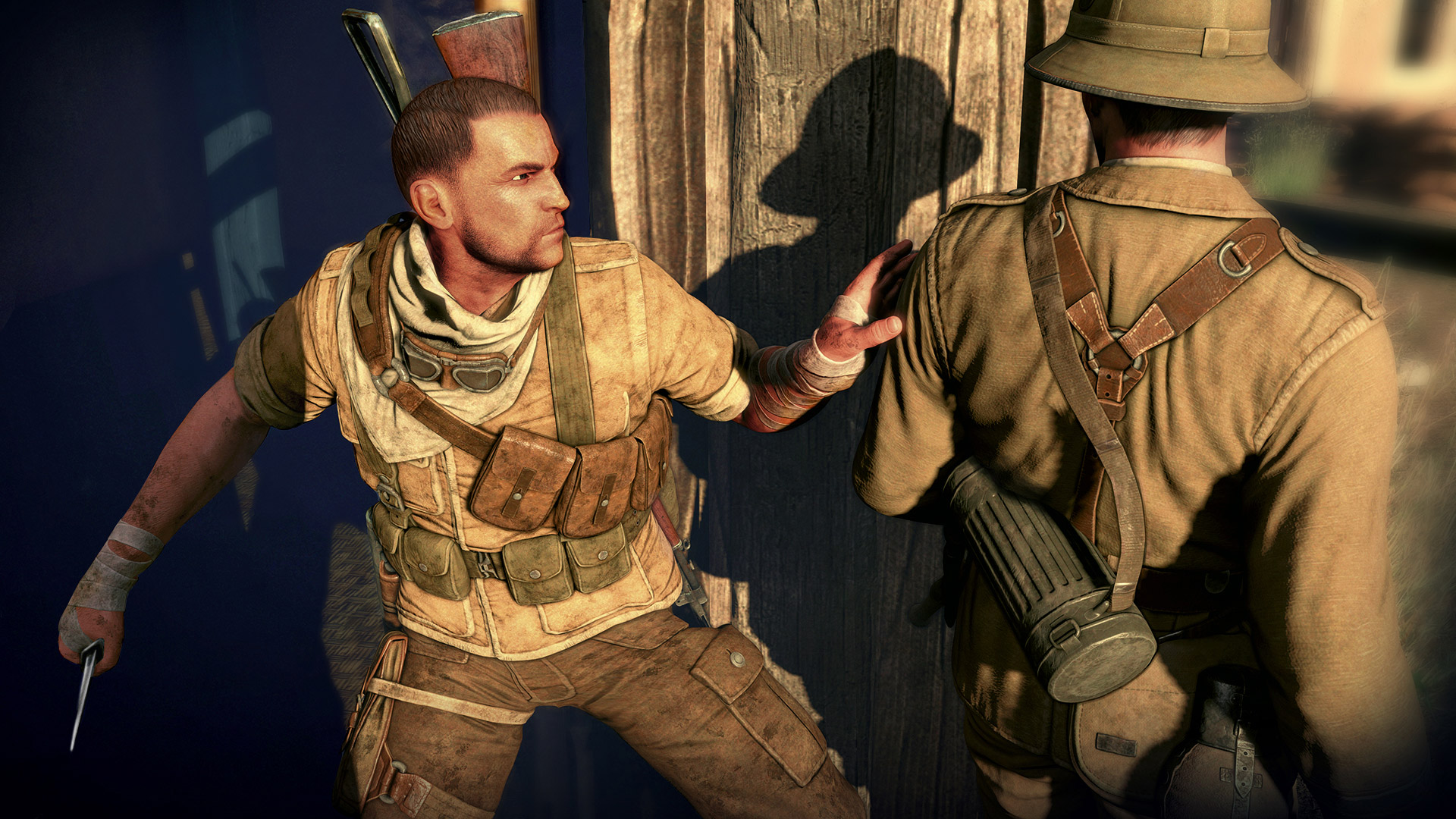 Players have great tools at their disposal, and can tag enemies they spot to track their movements for greater situational awareness. An onscreen eye-shaped icon conveys how visible Fairburne is to his enemies, depending on whether he's standing, crouching or prone, and how much light or shadow is on him.

The sound of Fairburne's gunfire and enemies' awareness of it is also a crucial consideration. An onscreen indicator shows when the Afrika Korps are able to pinpoint the sniper's location through sound, forcing players to relocate to a safe position. That option gives players a chance to collect their bearings instead of introducing a frustrating fail state, Jones explained.

"When things don't go according to plan, we decelerate the action," he said. "Otherwise we find players stop trying to be stealthy at all."

Players are encouraged to mask the crack of their sniper rifles by taking advantage of other loud noises, like the backfire of a truck or the boom of an eighty-eight artillery gun. In Sniper Elite 3, Rebellion is allowing players to create their own sound-masking options. Jones illustrated how Fairburne could sabotage one of the camp's diesel generators to backfire repeatedly, covering the sound of his gunfire.

Though long distance sniping and marksmanship are at the core of Sniper Elite, Fairburne has close quarter and hand-to-hand options for more intimate encounters. He can quietly stab enemies from behind and dispose of their corpses, or can kill with a silenced pistol.

Sniper Elite 3 gives players other killing tools to play with, including an expanded set of traps and mines. Fairburne can employ German S-mines, or "Bouncing Betty" mines, to take out enemies in Sniper Elite 3. In one section of the demo, Jones used a combination of dynamite, flint and steel — fashioning a timed fuse — to blow up a cluster of fuel barrels, taking out an artillery gun position.

While stealth and covert kills are often players' best options, Sniper Elite 3 also offers more explosive tactics. Players can take out vehicles by targeting the combustion engines of trucks, causing impressive destruction. Doing so shows off another new feature; the X-ray kill cam, which normally shows the detailed and gruesome bodily destruction a sniper bullet can perform on the human anatomy in slow-motion, is also being used to illustrate vehicle destruction in Sniper Elite 3. And for fans of the X-ray kill cam, the flesh-and-bone gore is even more pronounced. Rebellion is now modeling circulatory and muscle systems in sniped enemies.

At its core, however, Sniper Elite 3 is still about taking the perfect shot, while also being aware of factors like wind direction, breath control and heart rate. The beat of your heart, Jones said, is something that Rebellion will communicate through vibration in PlayStation and Xbox controllers. On Xbox One, he said, the developer is taking advantage of the controller's new force feedback, using the trigger-area vibration to send heartbeat data through players' trigger fingers.

Rifle customization, a common fan request and one of the game's "big points," will also play an important part in Sniper Elite 3. Players will be able to unlock and equip new scopes, stocks, barrels and customized reticles as they earn experience and progress in rank. It's one of the features players have been clamoring for, Jones said, adding that Sniper Elite fans seem excited about the gameplay changes and North African campaign.

"Our fans, they really have a deep passion and understanding, not just for the weapons, but for the history as well," Jones said. "We can't wait 'til they get their hands on it."