EA Sports' usual World Cup-specific soccer game for this year's tournament is EA Sports 2014 FIFA World Cup Brazil, and it will be released April 15 in North America and April 17 in Europe on PlayStation 3 and Xbox 360, publisher Electronic Arts announced today.

As the World Cup video games generally do, 2014 FIFA World Cup Brazil will feature some gameplay improvements over the most recent FIFA Soccer game, last fall's FIFA 14. According to EA, the game offers an expanded control scheme with extra dribbles and flicks, as well as additional animations for special passes, both of which will give skilled players a leg up. EA has partnered with Adidas to ensure that the soccer balls used in the game will behave with the same ball physics as in the real world. Other additions include new options in penalty kicks and defensive headers.

The main mode in 2014 FIFA World Cup Brazil is Road to the FIFA World Cup. The offline mode allows as many as 32 local players to choose from the game's 203 national teams, with the goal of qualifying for the tournament and then winning it. Also available is Road to Rio de Janeiro, in which players compete online with a national team to make their way across the 12 different host cities in Brazil. In addition, developer EA Canada is bringing back the Captain Your Country mode from 2010 FIFA World Cup South Africa. And English versions of the game will offer updates on in-game tournaments with EA Sports Talk Radio, which features more than 50 hours of recorded audio from ESPN soccer broadcasters. 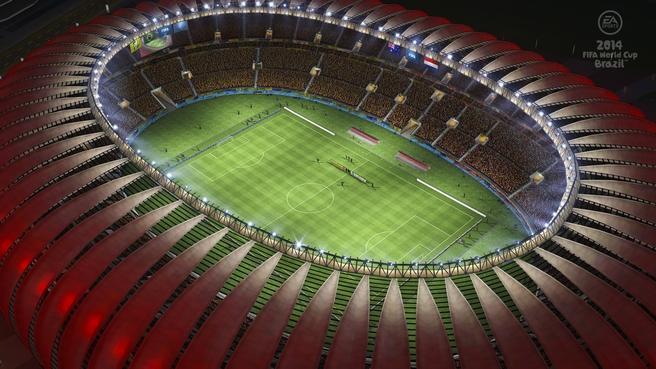 You can check out a teaser trailer above. While FIFA 14 was also released on PlayStation 4 and Xbox One at the consoles' respective launches last fall, it doesn't appear that 2014 FIFA World Cup Brazil will be available on the new systems; we're reaching out to EA to ask, and will update this article with any information we receive.

Update: 2014 FIFA World Cup Brazil will be priced as a "front-line, full-featured console game," said Matt Prior, lead producer on the title at EA Canada, through an EA representative in an email to Polygon. Although he didn't provide a specific price, that presumably means the game will launch at $59.99.

Prior also confirmed that 2014 FIFA World Cup Brazil isn't being developed on PS4 or Xbox One, although he noted that World Cup content is on the way to FIFA Ultimate Team for FIFA 14.

"When we made the decision we considered a number of factors but most importantly we wanted to create the best game we could that could reach as many people as possible and the way to do that was make our best game yet on Xbox 360 and PlayStation 3," Prior explained. "We gave our team the mandate of setting a laser focus on building the highest quality game for [Xbox 360] and PS3 they could, and that's exactly what they are doing."