Share All sharing options for: Dungeon Keeper stacks deck in EA's favor when it comes to Android feedback

The Android version of EA's Dungeon Keeper does its best to prevent users from providing negative feedback.

It's typical for an app to ask the player to submit a review after it's been played for a few hours. A prompt appears, pointing to the app store, where the player can select 1 through 5 stars and leave a blurb of text.

In Dungeon Keeper, if the player selects the "1 - 4 Stars" option, they're directed to a private feedback submission page. Only if the player selects the "5 Stars" option will they be taken to the Google Play page, where they can leave any rating they wish along with a blurb. The system is designed to make good feedback public and visible, and to allow EA to keep negative feeback hidden so it can be dealt with privately, or ignored entirely. 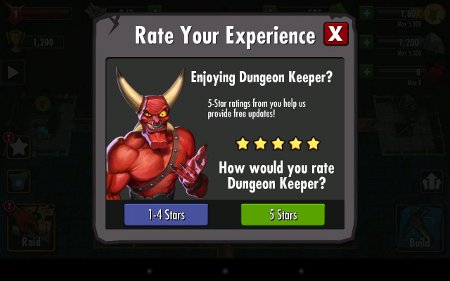 People react strongly to feeling censored, which helps to explain why this news is gaining such traction on social media. It doesn't help that EA executives point to the game's high star rating to deflect criticism of the title's pay-to-play mechanics. It's true that the players can provide feedback to the company, but it's also true that the mechanism to do so has been weighted rather heavily to favor positive feedback.

Now to be fair, on many occasions the publisher and its senior employees have responded thoughtfully to their audience's feedback, though not before dismissing it outright: The initial SimCity launch; The Code Wars criticism; The worst company in the world award.

There's a recurring tenor to EA's communication with the public: it's argumentative, tone deaf and sometimes a little nasty, followed by an inevitable mea culpa. It's an issue we've discussed before.

The most recent example of EA's poor communication is Battlefield 4. The publisher's flagship franchise title was supposed to be an audacious, spectacular, modern first-person shooter; an experience that justified the next-gen consoles; and a shot across the bow of rival publisher Activision's Call of Duty series. The game sold well, especially so on PC, but the early adopters were rewarded with an all but broken multiplayer mode. Problems persisted through the holiday season, never getting entirely quashed, despite a number of patches.

EA has half-heartedly responded to a swell of criticism by rewarding players with bonus content that rewards players for playing Battlefield 4 on EA's timetable. On a recent earnings call, EA's COO Peter Moore said he believed softened consoles sales of Battlefield 4 had to do with the transition from current to next-gen consoles, and not "we believe, linked to any quality issues." In the same call, the EA executives cushion their language, referring to "some" users having troubles.

This is Ben Kuchera's attempt to play the single-player game in January on the PlayStation 4. 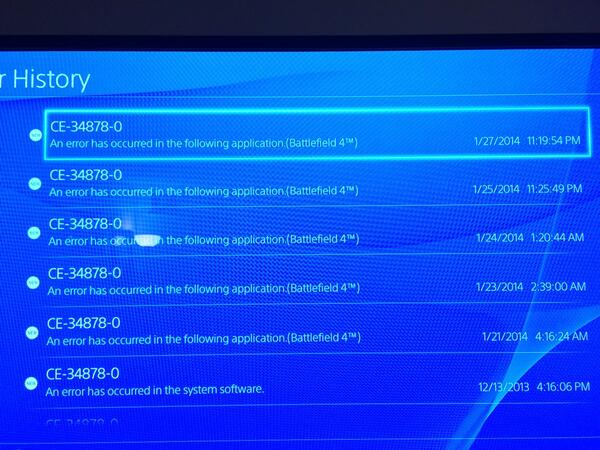 This is my attempt to play multiplayer around the same time on the Xbox One.

EA has shown little ability to discuss these issues openly, or even to admit they exist. Compare the Battlefield 4 statements with the company discussing the controversy of Dungeon Keeper's design in the following exchange.

"At the time of this interview, App Store ratings currently sit at 4 out of 5 stars and Google Play ratings sit at 4.5 out of 5 stars. We're also seeing a lot of game downloads and in-game engagement so that tells us there is a large group of people who are playing and enjoying the game," EA Mythic's Jeff Skalski told Tab Times. "Obviously, this is counter to some of the angry reactions we've seen around the internet, so we're still trying to look at all of these data points."

That data point is largely due to how the app pushes you away from negative feedback on Android devices, although the rating system seems to work as expected on iOS. It's designed to allow positive feedback to be reflected on the storefront, but negative feedback to go directly to EA, bypassing the public aspect of the star system entirely.

"We’re always looking at new ways to gather player feedback so that we can continue to improve our games. The 'rate this app' feature in the Google Play version of Dungeon Keeper was designed to help us collect valuable feedback from players who don’t feel the game is worth a top rating," EA told Polygon. "We wanted to make it easier for more players to send us feedback directly from the game if they weren’t having the best experience.  Players can always continue to leave any rating they want on the Google Play store."

EA is bypassing the public aspect of the star system entirely

The ratings pages may change, but EA will walk away with more people knowing that Dungeon Keeper exists. Sure, the company's found a way to anger vocal players, but what's the worry if they can continue to tell stock holders it didn't hurt sales? We can also expect to see this trick on more games; if there's anything mobile has taught the industry it's that "good" ideas are easily copied.

It helps when you can control how the players rate or your games, or at least stack the deck in your favor. All press is good press, right? Let that be the company's unofficial slogan.