After stalling on Kickstarter, Next Car Game finds success in Early Access

Share All sharing options for: After stalling on Kickstarter, Next Car Game finds success in Early Access

Bugbear Entertainment canned its Kickstarter campaign for motorsport title Next Car Game, but it was hardly an admittance of defeat.

When the game launched on Steam Early Access about two months later, it arrived with a bang — and pulled in around $1 million in only a week, lead game designer Janne Suur-Näkki told Polygon in an email interview.

"To be honest, the success of the Early Access release caught us by a surprise," Suur-Näkki said. "Just before the holidays, we released the first playable build to our pre-order customers, and by the end of the Christmas week the title had already sold for more than our initial funding goal on Kickstarter."

That success was followed by its arrival on Steam Early Access, which Suur-Näkki calls a testament to the model's viability. Despite the grim implications of the canceled Kickstarter, Next Car Game's prospects are "looking great," and the game experience will remain as the developer intended.

"It's pretty safe to say that the players will get the game that we initially envisioned," Suur-Näkki said. "That said, we did have next-gen console versions as stretch goals on Kickstarter, but now we're concentrating on developing the PC version, hoping that we will have a chance to port the game on PS4, Xbox One or both somewhere along the way."

"It's important that the campaign is launched at the right point of the product's life cycle."

The decision to kill its Kickstarter campaign was an option Bugbear considered from the very beginning. Before launching the crowd-funding effort, the developer chose to approach the potential for success or failure equally. If the campaign hadn't tipped the halfway point by its third week, it would be obvious that the effort was fruitless, Suur-Näkki said.

"In that sense, the actual decision [to pull the Kickstarter] was easy and done pretty quickly," Suur-Näkki said. "We simply didn't see much point in continuing. We trusted in our game and knew that the development proceeded well, so it seemed feasible to redirect all efforts in running our own pre-order campaign and getting the game into the hands of the players as soon as sensibly possible. After all, our pre-order campaign had been doing pretty nicely all the time, so it made sense to us business-wise as well."

When asked if Bugbear would ever consider returning to Kickstarter, Suur-Näkki was overwhelmingly positive, responding with "without a doubt."

"We think Kickstarter is a wonderful tool for developers, and in all likelihood we will consider launching another Kickstarter campaign at some point in the future," the designer said. "However, as is evident from the outcome of our Next Car Game campaign, it's important that the campaign is launched at the right point of the product's life cycle." 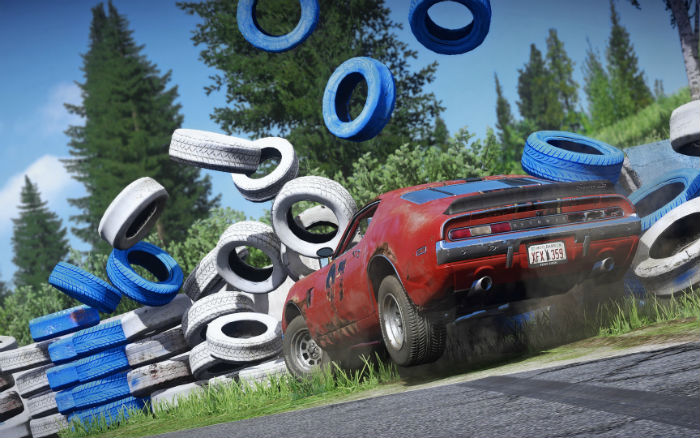 Kickstarter and Early Access are valuable tools in different ways, the developer continued. Crowd-funding is a risky move for those who use it to finish a half-completed alpha, but perfect for anyone with a strong concept. Steam Early Access, on the other hand, is preferable for those with something to show.

"Steam Early Access is definitely the way to go if you have a great game at a playable state, something that we learned from our campaign," Suur-Näkki said.