Some first-person action games require players to be quick movers, with the best player often having the fastest reflexes. Some require players to be quick thinkers, devising strategies on the fly to ambush their enemies. Throw Trucks With Your Mind asks none of this of its players. Instead, it requires them to be as calm as possible, to breathe, to quiet their minds and to focus.

The game is the brainchild of Lat Ware and his small team of artists and animators. It's a first person action game that merges traditional first-person shooter controls with the player's brainwaves. Using an EEG headset, the game looks for spikes in the player's brain's beta waves and, the better the player can control these waves, the better they perform in the game.

When Polygon first met Ware in June 2013, Throw Trucks With Your Mind was still a proof of concept, but it demonstrated what Ware and his team were trying to achieve. Ware wanted to empower players with Jedi-like powers. In the original demo, players could move around in the game and aim at objects through traditional mouse and keyboard controls, but the act of moving in-game objects was executed with the mind. This was done through the EEG headset, which tracked the player's focus and calm. The more focused a player was, the more powerful they were in the game. 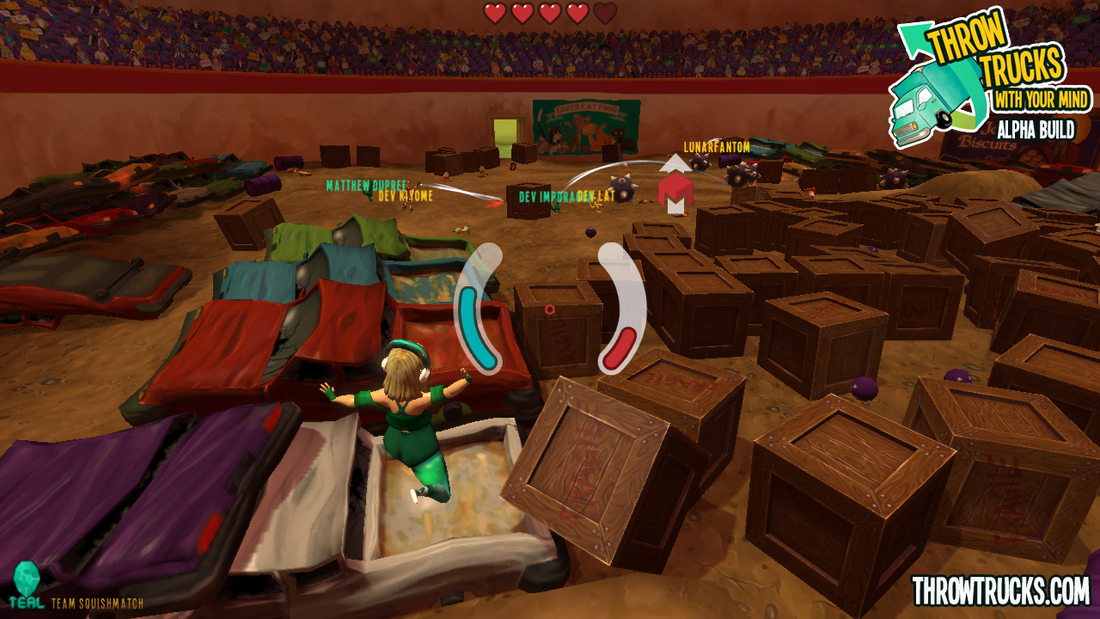 "The game doesn't know what you're thinking, it only knows how you're thinking," Ware recently told Polygon. "So if you wanted to pick something up, you would select the lift power, you'd aim it at the thing you want to lift, you'd hold the left mouse button and, the more mentally calm you are, the stronger the upward force on the center of mass of the object.

"Now, calm is very subjective because what makes a person calm is different from person to person," he said. "In my case, I have to believe I can do what I'm trying to do, otherwise I cannot raise my calm and will fail. For some people, focusing on their breathing helps with their calm. For other people, thinking of things that make them happy improves their calm."

Similarly, the EEG headset measures a player's focus. The more focused the player, the more powerful they are when they throw objects. "For focus, some people focus visually and stare at the screen, ignoring everything else," Ware said. "For other people, they focus on sound, like the laptop fan or a conversation in the room." He told Polygon that one player performed complex math problems in his head to increase his focus. 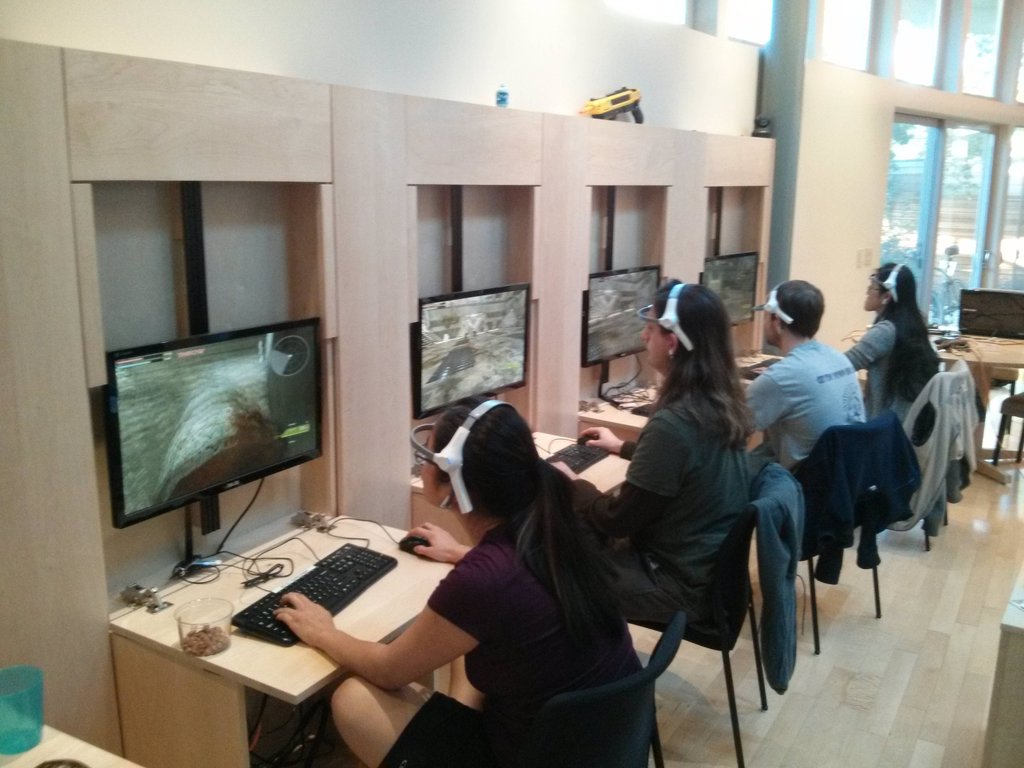 While these mechanics have not changed since the game's proof of concept, everything else has. The demo we saw in 2013 was set in single-player test environments. The game has since evolved into a colorful multiplayer experience, where players can choose distinctive characters, each with their own unique personalities, and play in diverse environments. The game aims to support up to 32 players at a time, and will feature challenges like Capture The Fridge, which is Ware's take on the Capture The Flag mode that is commonly present in first-person shooters. Players will need enormous amounts of calm and focus to lift the fridge and take it to their base, or to throw it at enemies.

Ware told Polygon that the emphasis on focus and calm makes Throw Trucks With Your Mind a challenging experience for players because it's not what they're used to, "but it's amazing how quickly people are able to adapt to it."

In play-tests of the game, the best player will generally achieve eight kills in 20 minutes, which is a relatively low number compared to traditional first-person action games. Ware said this is because the game isn't about speed. It embraces a slower pace, and players quickly understand that if they take their time, they are likely to perform better.

"Frequently, one person will be absolutely destroying other players, and a different player gets a surprise kill on them and it messes them up for a good five minutes afterwards," Ware said. "They have to say, 'Stop, remain calm, refocus,' and then they get back into the game and are able to recover. So it is a challenge. It is hard. But it adds a lot of interesting strategy to the game." 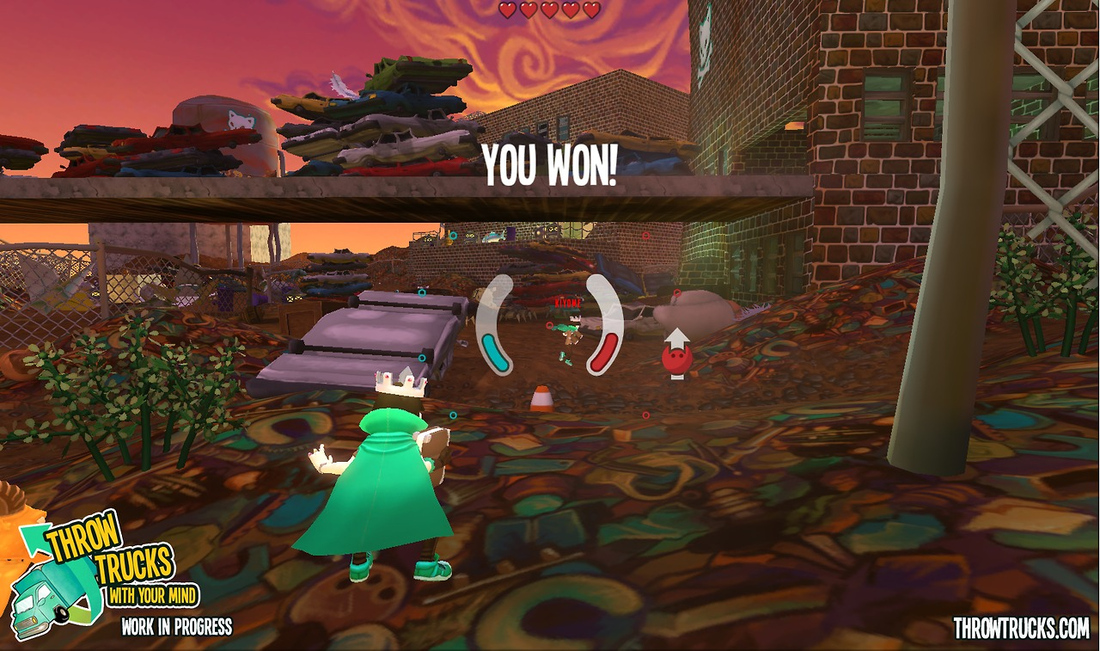 Throw Trucks With Your Mind's closed beta launches today on Mac and Windows PC, with a public launch on March 31. Those who pre-order the game from its official website will receive access to the closed beta. Players can either buy an EEG headset separately, or buy a bundle that includes the game and a NeuroSky Mindwave EEG headset. The game is also currently on Steam Greenlight.

Ware told Polygon he hopes players will find the game fun, but if they can also benefit from learning how to calm their minds and focus, then that's a bonus.

"A lot of people who play the game tell me they use the techniques they learn in the game in real life for tuning out distractions or staying calm in high pressure situations," he said. "It would be nice if this game had therapeutic benefits and was also really fun."