How indie devs are finding success, and publicity, in toys and merch

Share All sharing options for: How indie devs are finding success, and publicity, in toys and merch

There is nothing easy about creating a game, but creating products based on that game can be even trickier. Toys and merchandise used to be reserved for the largest franchises in the industry, but now even smaller games are seeing interest in collectibles and, in some cases, comical physical versions of in-game graphics.

Corey Rollins works at Klei Entertainment in a variety of functions, and his job description can be hard to pin down. "I have a really diverse, crazy background in a lot of different things," he told Polygon. "Like, all the photography on the website, and the video for the ninja, that’s all me. The website for the store is me." Does he have any experience in creating toys?

"Absolutely not," he said. But why should that stop anyone?

Why hundreds of toys were destroyed

The recently announced figures based on Mark of the Ninja and Don’t Starve aren’t the first time that Klei has attempted to create a toy. There was an earlier version of the Ninja character that was made into a figure, but when the final product didn’t match the prototype they had the entire lot of toys destroyed.

"I think 20 of them got sold at a discounted price at PAX because people really wanted them because they were the only thing that existed," he explained. "Even though they kind of sucked." The creation of that toy took around a year, and 400 or so units were ultimately destroyed to receive a refund on the goods. It was a hard, and expensive, look at how difficult it could be to make a high quality product. 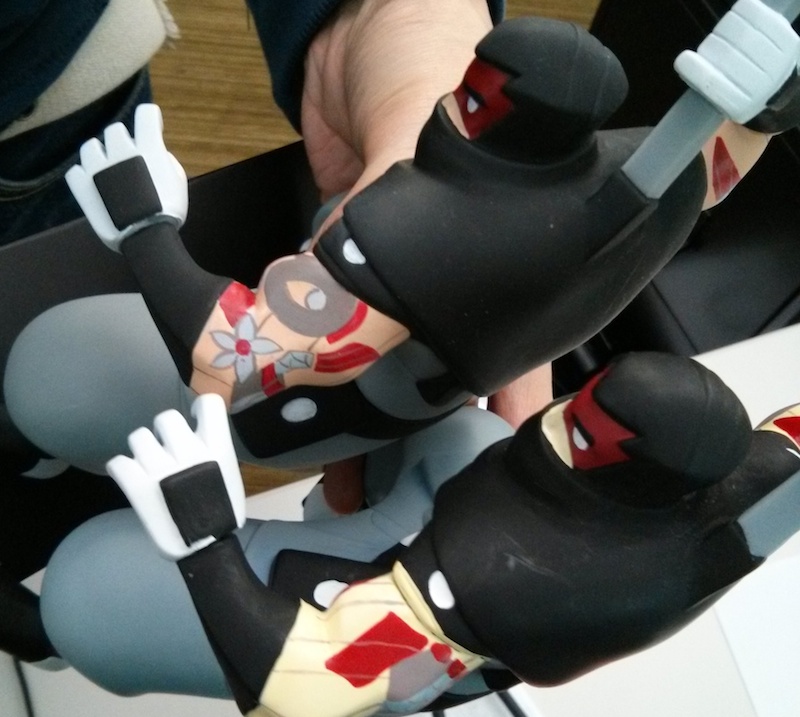 Still, the idea remained, and a recent Kickstarter for a plush toy was much more successful than expected. They asked for $15,000 to make the toy, and received over $151,000 in backing.

There were other indications of the pent-up demand for Klei merchandise. The company hosts community art on the site, and Rollins has asked for sculptures people have made for his personal collection. This ongoing connection fans feel for Klei properties is what inspired them to make another pass at physical toys. In fact, the fans were helping them in this regard.

"We have a policy for player creation guidelines that kind of gives people the OK to do this stuff, and as long as you’re making it handmade, and you’re not running it through an assembly line, you can sell it places like Etsy as long as you’re not pretending you own Don’t Starve or something like that," Rollins said. Their offices are filled with fan-created toys and merchandise that they keep in their own collections.

It was obvious the desire for more toys was there, but they needed the right partner. In the case of another company, merchandising became almost a chicken and egg question. If a toy sells well, is that evidence the game will also be a success?

The Behemoth is a company that has long found success in selling toys and collectibles based on its games, and in fact those toys were used as evidence that the game’s art was on the right track.

"Way back at the dawn of time when we started the Behemoth we didn’t know if our games would sell so we decided that at the very least we should make some 'urban vinyl' figurines to put on our desks in case the game never launched," John Baez, the company co-founder and producer, told Polygon.

"It turned out to be a great idea because we were able to use the figurines to help get attention for the game. We were still tiny back then, so it was just a 'let’s do this' moment rather than a calculated profit and loss statement/financial thing."

They later made official Castle Crashers figurines in the hopes that they help to cover expenses when traveling to conventions. Fans couldn’t buy the game, not yet, but they could pick up a high-quality collection of toys based on the game, and this might help keep people’s interest in the property. 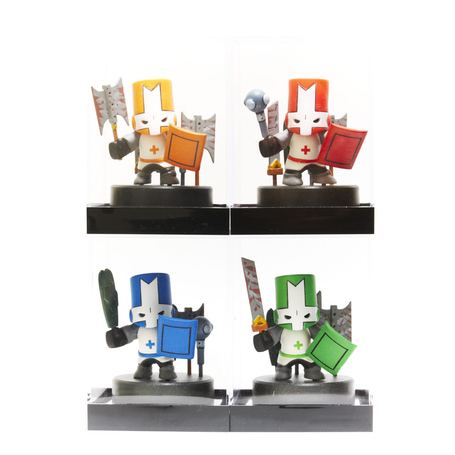 "They sold way better than expected so it gave us a lot of encouragement that we were on the right track with Castle," Tom Fulp, Behemoth co-founder and programmer, explained.

Behemoth’s booth at shows like PAX can look more like a toy store than a booth for a developer; the range of products is wide and the lines are long, but they say that the toys and products aren’t a major profit center for the developer. Instead they’re used as a way to defray the costs of traveling to events.

"Merchandise helps us attempt to break even at conventions, since the cost of our booths and Comic-Con and PAX gets pretty crazy. It has the added bonus of raising awareness of the games and spreading joy." Fulp explained.

The process of getting it right

Klei might not have had a positive experience with their first attempt at creating the ninja figure, but this time they’re teaming up with Erick Scarecrow’s ESC-Toys to create something of higher quality. That process isn’t quick; the first conversation happened in May 2013. The creation of the toys, and their ultimate release, took a little under a year.

"There was lots of back and forth between us and Erick, that’s why we love working with Erick so much. We are a huge part of the process. And he just asks us the questions, and because we’re really art-heavy and I’m great at Photoshop and stuff, we just go back and forth," Rollins said.

Klei created images of what they wanted the Don't Starve toyline to look like, Eric would explain what was and wasn’t possible in production, and edits would be made before clay sculpts were created, then wax molds, then steel plates that would be used to make the vinyl. The process was extensive, and iterative; it takes time to learn what is and isn't possible in a physical toy, and matching a 2D image with a 3D product is more art than science. 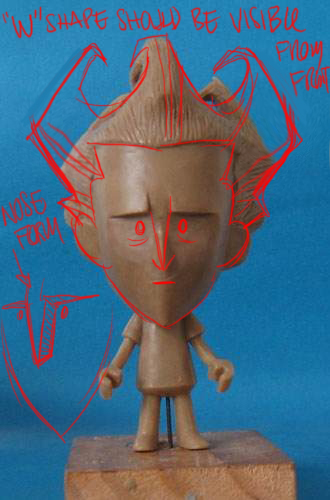 Klei decided to create a 3D model for the Ninja toy to begin that process. "We modeled the 3D model in-house and gave it to Eric. He and his team cut it up intelligently so it would fit into molds and come out of the molds nice," Rollins explained. "Like the arms and where the seams were and stuff. And I think that, when possible, we may do the 3D model thing again. We might try that again if we were going to make toys again. It seemed to be pretty reliable."

The blind boxes for the Don’t Starve toys allowed them to experiment with many different designs and accessories, and they adjusted the ratios to make sure the most popular figures would be over-represented in the boxes.

"They want Wilson. So I tried really hard to balance out the character ratios in a way that played highly in the favor of the odds. And even if somebody buys the retail box, which is not a complete set, but it comes with 16 in there, every single complete set, if you buy a retail box with 16 blind boxes, you almost have a complete set," Rollins explained.

"The way that I had them mechanically packaged, once they’re packaged I have no idea what the hell’s inside each box, but the way I had the ratios planned out for the boxes, it’s going to be really hard for somebody who’s just buying three to get a duplicate."

It’s a clever approach. They’re not left with dead inventory, and the most popular toy is the easiest to get. What might be the less popular toys become rare, which makes them easy to trade at events if you want something specific. The Behemoth has also used blind selection in selling things like pins, and this encourages people to hang around the booth, trade with others, and discuss the games and property. There’s a social aspect of blind boxes that adds to the experience, especially at shows like PAX.

It helps that these are high-quality, detailed toys as well. Surely this approach wouldn’t work if the toys were simple blocks. Right?

Thomas Was A Toy

Thomas Was Alone is a successful indie game that featured characters that look and acted like wooden blocks. The idea of merchandising such a simple game sounded silly, but there was a surprising amount of interest in the idea.

"I honestly think it started with someone making a sarcastic gag on twitter. 'You should make toys!' The idea tickled me, I just thought the idea of selling plastic cuboids was funny," Mike Bithell, the game’s creator, told Polygon. "It got funnier when I started imagining what it'd be like if we did it right: Manufactured them well, made up some decent packaging for them, that kind of thing."

He set up a link to a mailing list to check interest, and received 300 signups on the first day. What started as a joke became real: What would be the easiest and best way to create a series of blocks?

"The initial idea was to 3D print them, but even though I'm loving our new toy, the quality isn't up to what we want. There's bending, seams, low resolution stuff, and no one wants to spend their days sanding cubes one by one," Kerry Dyer, Bithell’s partner in charge of the project, explained. 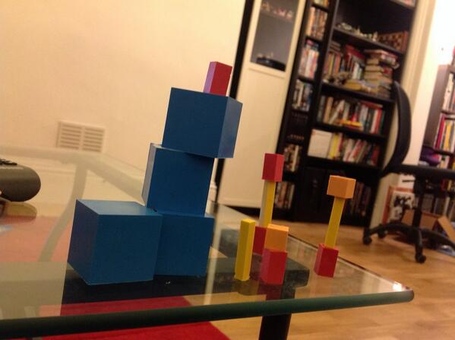 "We're now using the initial 3D printed prototypes to get scale. I polished them up, and used them to make silicone molds, and I'm casting them in resin. We're getting in blister packaging, and Mike's designing the art card to go inside because he … he does that."

This isn’t going to create as much profit as the games, but it’s a good excuse to try a new thing. "We're obviously going to charge a price that covers our costs and makes a small profit, but no, this won't compare to the money my games make," Bithell said. "I see it as a fun side project which gives fans of the game an object they can pop on their shelf. It also has the side benefit of being a practice run if we ever want to do physical merchandise for a future game."

"I do a lot of puppet and prop work for film and TV, but I like video games, and want to do more stuff with game characters and objects," Dyer agreed.

"This is a fun and, to be honest, pretty silly and straightforward way to get some video game themed stuff done I've done some Turian figures from Mass Effect in the past, but obviously I have more freedom to make and sell stuff based on Mike's games."

The world of indie merchandising is still new, and these three approaches are far from the only experiments in this space. Others are selling T-shirts, pins, buttons, toys... the ability to create medium-scale projects and sell them for at least a slight profit has opened the door for all kinds of games to have their own physical merchandise.

Rollins said that sales saw a spike when the store was announced, but they’ll have to wait a bit to find out the long term demand for these toys. "It’s kind of just a big, living experiment," he said. "It’s really exciting for both me and Klei to be jumping into this new terrain."

Daredevil’s been born again as a Marvel nice guy — but can he be serious in the MCU?