Like the genre mashup she inhabits, Red Robin is a very unusual kind of video game protagonist.

Red, an allusion to fable character Little Red Riding Hood, trots through her world with her wolf companion at her side, a never-ending thirst for alcohol and a mouthful of snark. Red is the heroine of Dragon Fin Soup, a roguelike role-playing game hybrid by Grimm Bros, a studio founded by two industry veterans looking to make something a little different.

CEO Ash Monif, former chief operating officer of Human Head Studios and an Electronic Arts veteran, told Polygon that when development first began on Dragon Fin Soup, he and partner Randis Albion — artist and Grimm co-founder — knew JRPG conventions had to be in its DNA. As longtime fans of the genre, Monif said the studio wanted to use the its storytelling conventions as the base for their fairytale-inspired adventure. But the pair didn't want to just make a straight-up, black and white RPG, instead choosing to marry their game with the resource management, strategy elements and occasional breakneck difficulty of a roguelike.

"Our idea was, what if you took a roguelike — a traditional, PC roguelike — and then you blended it with the stories of a JRPG and made it fun and accessible," Monif said. "Dragon Fin Soup is kind of between those two things. It's still turn-based, but it has very fluid movements, so you're still in control, and we added more tactical elements." 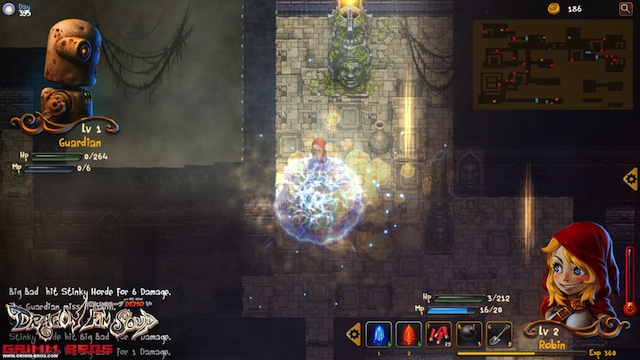 Grimm's fairytale-inspired Dragon Fin Soup plays out on a grid. Players move along squares as they advance through the world, talking to NPCs and taking down enemies by clicking on them. During hands-on time with a current build of Dragon Fin Soup, we guided Red on a zombie-hunting adventure — but not before grabbing a quick drink at a tavern first. The UI is displayed around the borders of the ring, showing how many turns players have taken in the top left corner and detailing available spells and Red's hit points in the bottom right. Inventory is stacked along the right side of the screen, accessible in a pull-out menu through which Red can find healing items, weapons and other goodies.

Some bosses in Dragon Fin Soup draw from other classic titles. We saw a mid-game boss battle against a kraken inspired by classic Legend of Zelda dungeon puzzles. Red had to move two blocks down into a pit to open a gate, through which she could attack the head of the kraken. Until she could do that, Red was surrounded on all sides by flailing tentacles relentlessly whittling down her HP bar. One she was able to attack, Red had a number of actions available to her, including using spells, shotguns and bombs.

The dialogue in Dragon Fin Soup is tinged with bawdy humor and innuendo, an appropriate tone for a world in which your point of entry is an alcoholic, smarmy blonde in a crimson hood. But nothing about Red is off-putting; on the contrary, it actually feels refreshing to play as a strong young woman who's more scrappy than sexy.

"When we first started visualizing her, we thought of raging redneck alcoholic with a shotgun," Monif said. "That was what we first started with. Since then, though, we've started to make her more human, less toned down. But one of the things you learn about her is she likes to drink, and there's a reason for that."

Red is drinking to forget something horrible that happened in her past — not the most ladylike of qualities, but also not one that hinders her. Players can give Red alcoholic drinks to bolster her health and make her fight better, adding strategy to her vice. But she isn't the only one in Dragon Fin Soup that's rough around the edges. 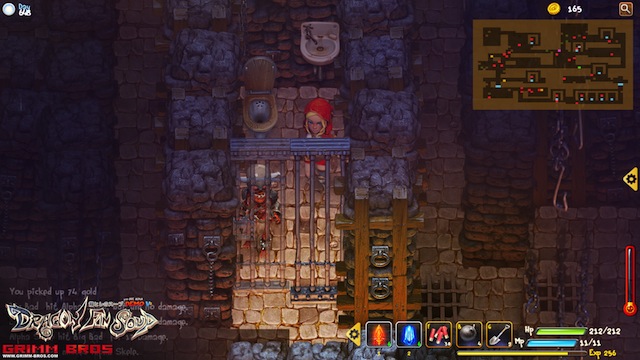 "Our characters have flaws, because we think that gives them personality," Monif said. "It makes them interesting. There's really no hero, there's just characters that are going through their life experiences or their stories. So this first game, we decided to call it Dragon Fin Soup, and in it, it starts with her tale, her story. The plan is to add more characters, more fairy tale-inspired characters, farther down the line.

"I think fairy tales are just awesome," he added of Grimm 's focus on fairy tale-laden stories. "They're a great medium to be inspired by. No one in the game space is really trying to own fairy tales, and we want to do them justice. We want to go back to the old, gritty stuff. Plus, Randis and I were big fans of fairy tales and folklore growing up, along with reading J.R.R. Tolkien and all the other classics."

Players will begin Dragon Fin Soup with a heap of story-related quests, but the game will also have additional procedurally generated quests that players can complete if they are up to task. These can be completed in normal mode, or in a "hardcore, classic roguelike mode" that includes permanent death and is "pure exploration," allowing players to unravel the game at their leisure. But we played Dragon Fin Soup in "classic JRPG mode," which was more forgiving than its survival-focused roguelike mode. Players can save anywhere and load from their last save, and when they die in combat they will respawn where they left off with all items intact. 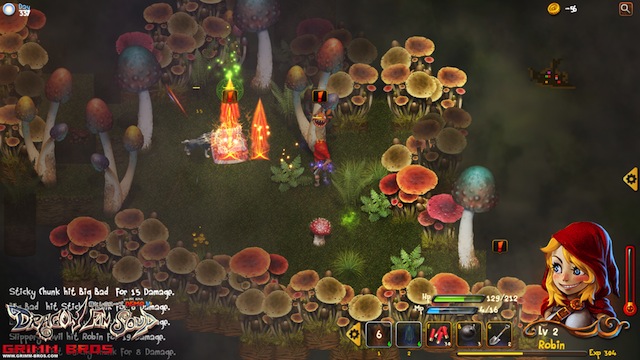 Another interesting note about Dragon Fin Soup's gameplay is that the speed of the action matches players' speed. Pausing the game will pause the action, but as players begin rapidly clicking through areas, moving Red more quickly through foliage and dungeons, enemies and other on-screen characters will also speed up as the game matches your pace.

"If you speed up, the game moves as quickly as you do," Monif said. "So that's our innovation. That's what we meant by taking a classic roguelike and a JRPG and blending the two. This is something really unique; we don't really see too many games that play like this."

Dragon Fin Soup's HUD, UI, art, characters, animations, special effects, the day-night cycle, the procedurally generated weather patterns and the story are all currently being done by one man: Monif's partner, Albion. Monif said he himself contributes to development and collaborates with him on ideas, but most of the man-power is done by Albion. Having left AAA development, the space created by Albion and Monif with Grimm Bros is one of pure passion — and the attention to detail, down to each item on the action bar and Red's freckles, shows it.

"I've been in the industry about 15 years, and so has Randis, and we've been longtime friends," Monif added. "And we basically said, we've worked for a lot of other companies, like Atari and everyone, but what do we want to do? If we go indie, what do we really want to do? Some indies just look at the market and try to make a copy of this or that, or they just look at analytical trends and build their game around that.

"We think life's too short. We've worked too many years for other people on their visions. Let's do things that just really excite us. And we both love fairytales, and we said, well that's a huge source of inspiration, especially the really dark ones, the real gritty ones. Not the whitewashed stuff that Disney does, but the real fairy tales, the real Grimm."

Monif, who has worked on numerous games at Human Head as well as titles including The Lord of the Rings: The Third Age at EA, said the leap from AAA to indie was driven mostly by a desire for creative fulfillment and stability.

"You work on these [AAA] titles and it's great to be exposed to that and work on a creative team, but at the same time, that's not your story," he explained. "That's not your vision. So while it's been fun, it's not necessarily why I got into making games. Second is sustainability. A lot of studios have multimillion dollar burn rates. Just tons of, they're burning money. And one of the issues is that it's become a culture of crunch. Work hard really fast, and then there are layoffs. Crunch, and then layoffs. Crunch and layoffs. And that's because these companies are built for profit. That's the most profitable thing to do.