R.B.I. Baseball 14 wants to be the simple, fast-paced game you remember

Share All sharing options for: R.B.I. Baseball 14 wants to be the simple, fast-paced game you remember

Major League Baseball Advanced Media surprised us all when it announced in mid-January that it would be reviving the R.B.I. Baseball franchise — a series whose most recent entry was released in 1995 — with R.B.I. Baseball 14 on old consoles, new consoles and mobile devices this spring. After speaking with the game's production team, it's clear that MLB Advanced Media's new game is doing just that: bringing back a long-dormant franchise the way you remember it, for the most part.

To start, any Xbox 360- or Xbox One-owning fans of simulation baseball video games should disabuse themselves of the notion that R.B.I. 14 will serve as a competitor to Sony San Diego's PlayStation-exclusive title, MLB 14 The Show. MLB Advanced Media, the digital and interactive media arm of Major League Baseball, is aiming for something different — something that hews closer to the simpler sports games of the '80s and '90s — so Xbox gamers still have no options for baseball simulations this year, now that 2K Sports' MLB 2K series is no more.

"It's going to be very true to the roots of the brand, of R.B.I. Baseball," said Jamie Leece, vice president of games for MLB Advanced Media, in a phone interview with Polygon earlier this week. "It will be fast-paced; games can be played in under 20 minutes. From a user control standpoint, fans will find the controls to be 'classic,' reminiscent of the two-button controls from games of that generation."

MLB Advanced Media is developing R.B.I. 14 in-house with a team that, at its peak, had as many as 40 employees; it is the company's first console game.

Leece clarified that R.B.I. 14 will be an arcade experience; the term "arcade" carries specific connotations for sports titles, and they don't apply here.

"That's exactly one of the challenges with the word 'arcade' — as soon as you say 'arcade,' you start thinking about power-ups and boosts and things of that genre. And we don't have any of those [things]," said Leece. Actually, R.B.I. 14's developers are taking advantage of the massive trove of data that MLB Advanced Media collects during every real-life baseball game, and using it as the basis of player skill and behavior in the game.

"When we look at all the data that we have here on player behavior, it's a very complex set of information," said Leece. "Basically, what you see in the output of the players will reflect that data in a very unobtrusive way."

MLB Advanced Media is pairing that real-life foundation with a stylized look that sits somewhere between cartoonish and realistic, as you can see in the PlayStation 3/Xbox 360 screenshots above. While R.B.I. 14 features real baseball players — 16 on each of the 30 MLB clubs, a total of 480 — each of them appears in one of three body types. It's the kind of visual shorthand that sports games have used for decades: Big guys are sluggers, slim players are contact hitters and athletes of average build are balanced.

The modes in R.B.I. 14 are similarly basic. Three are available: You'll be able to play one-off exhibition games, take a team through a season (a full 162 games or less) or start at the beginning of the postseason. Each team has three jerseys — home, road and alternate — and you can gain access to a fourth uniform, a retro jersey, by completing a challenge in the season mode. The unlockable uniforms include the Brooklyn Dodgers jersey and the yellow jersey for the "We Are Family" Pittsburgh Pirates of 1979.

R.B.I. 14 won't offer any of the deeper, more expansive modes that fans of simulation sports games may be used to, such as single-player career modes or online leagues. In fact, R.B.I. 14 doesn't feature online play at all; multiplayer action is limited to local one-on-one games.

"The modes we have right now are in line with the expectation of R.B.I. It's very important for us to make sure that the gameplay experience stays true to the core of the entire era and the genre," said Leece, when asked about the basic setup. It's possible that future games in the series from MLB Advanced Media could offer an expanded feature set. But "for this version," Leece continued, "we specifically wanted to focus on making sure that we nailed that right. Adding window dressing, and enhanced features and modes, may have gotten in the way of us getting the core experience right." 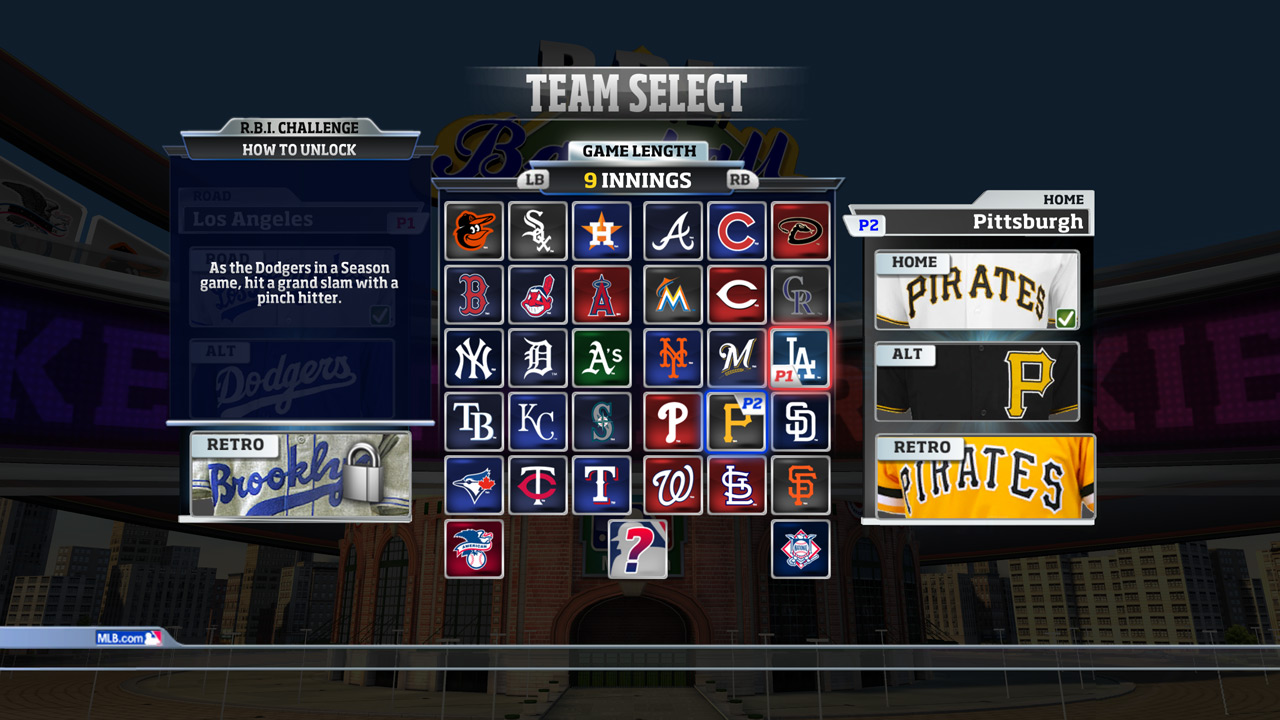 MLB Advanced Media has not yet confirmed the prices for the various versions of R.B.I. 14, but a spokesperson told Polygon that it will only be released digitally on all platforms. With such a limited scope for the game, prospective buyers will likely be expecting it to cost less than $60.

To be sure, the throwback ethos of R.B.I. 14 — bringing back the intensity of childhood battles on the couch and the simplicity of those classic sports games — has an undeniable appeal for its nostalgia factor alone. This is an approach that EA Canada tried with the NHL '94 Anniversary Mode in NHL 14 last year. There was plenty of excitement around the announcement of R.B.I. 14, as is the case with many retro revivals; what remains to be seen is whether the game will turn out to be good enough to bring in that potential audience.

"What we're trying to [do] here [is] kind of capture an area that had not been capitalized on in a long time," Leece explained. "This is something unique [for] an audience that had not been served for a while."

An MLB Advanced Media representative declined to confirm last week's report of an April 10 release date for R.B.I. 14. The rep said the game will initially launch simultaneously on PS3, Xbox 360, Android and iOS in "early April," with PlayStation 4 and Xbox One versions to follow soon afterward.