Share All sharing options for: Monaco creator's new game Armada will invite the masses into a controller-based RTS

Monaco: What's Mine Is Yours was a top-down class-based stealth game that was easy to learn, but mastery required extensive practice and understanding the game's rhythm.

The game went through an extended development time of over three years, but the final release on Mac, Linux, Windows PC and Xbox 360 was a hit. Andy Schatz, Monaco's creator, is now setting his sights on another genre.

"With Monaco, we took an old school genre (Stealth), we simplified the controls, and then we built an incredibly complex game that could be played at high and low skill levels alike," Schatz explained in the blog post that introduces the game. "I want to do the same with the real-time strategy genre."

The controller will set you free

"Learning the basic mechanics of Monaco is easy, but to be good at the game, players have to study the levels, understand the behaviors of the players and the enemies, practice and optimize. By simplifying the RTS control set in Armada, I'm hoping players pick it up much more easily than other RTS games," Schatz told Polygon.

"But by retaining all of that behavioral complexity, players will really have to get to know the game before they can be considered masters."

The danger is that the game may lose what makes the real-time strategy. "Pikmin and AirMech, for example, are great, but don't really feel like RTS to me. With Armada we're trying to satisfy a very particular and familiar sort of craving: the C&C/ Warcraft / Starcraft style RTS."

The goal is to create a real-time strategy game, played with a controller, that is easy for players to pick up and learn while still giving you the feel, "emotionally and intellectually," of playing something as traditional and complex as StarCraft 2.

"You can't take the RTS design formula and just translate the controls. It simply doesn't work," Schatz told Polygon. "Unit selection on an analog controller is bad. Orders are bad. Scrolling around a map is bad. The analog controller is built for vector movement about a central point — a player-character."

Which is how this controller-based RTS will work. You’ll be in charge of a Champion, just like League of Legends, who is surrounded by AI-controlled units. Your character can build structures, fight directly with the enemy, scout the map and lead your forces.

"We're rebuilding the RTS formula to avoid the problem areas and emphasize the things the analog controller does well," Schatz said. "Adding a MOBA-like champion to the world, but allowing the player to craft their defenses, build armies of mixed types, and allowing for a more open-world map like SC2 gives Armada the best of both worlds."

The game is a month in development, but it could be finished in as few as six months. Of course, that’s how Monaco began before taking three years to launch on PC, Linux, and Xbox 360.

"We’re only a month into development and we already have a strong networking system built for the basic features, a working replay system, a basic editor, and pretty much all of the game data is in human-readable (and editable) XML format," the blog post states.

"I originally wanted Monaco to be extremely moddable — the levels, the characters, the weapons were all originally envisioned as a bunch of modifiable assets," Schatz told Polygon. That approach didn’t work with console development, and a "late" release of the level editor and mod support the developer himself described as "weak" didn’t help.

"This is a problem we intend to fix with Armada. Since the game is so early in development, we expect some of our core Monaco community members to help out testing new units and brainstorming features by implementing them on their own," he continued.

There is next to nothing to show from the game yet, although Schatz seemed comfortable answering questions about the game's goals and design. Great ideas are easy though, executing them and releasing a fun game is much harder, and Armada sounds like an ambitious project that is looking to update an entrenched genre with a raft of player expectations. The one image at the top of this story is the lone asset released for the game to date.

This won't be a one-man show, however. Andy Nguyen, Monaco's producer and level designer will be moving onto the project once he finishes his work on Monaco's post-launch content, and Adam deGrandis, one of Monaco's artists, helped create a gameplay prototype of the game. 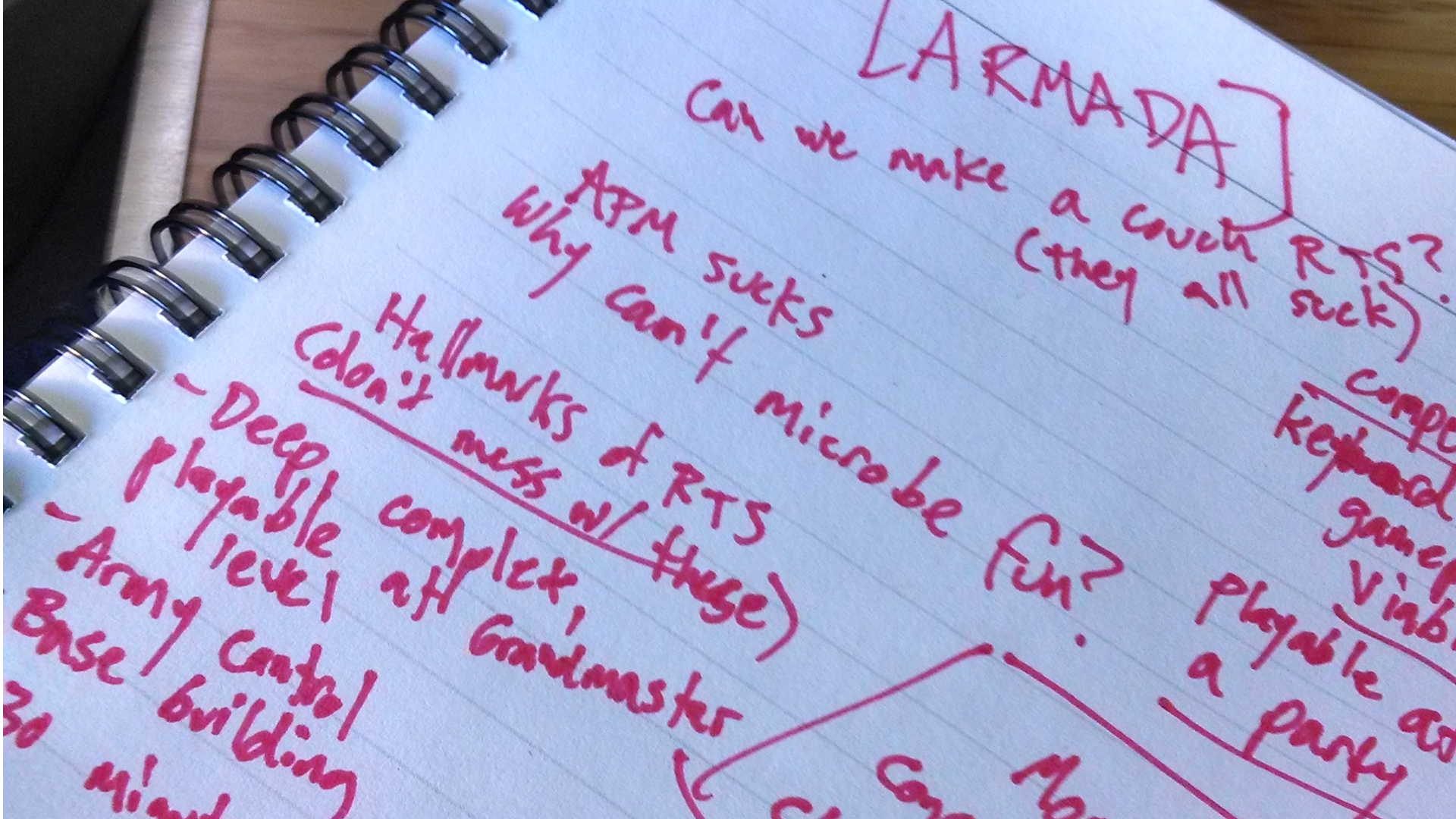 Schatz also said that he was hoping to work with "a certain composer friend" of his again as well, so it's likely the game will ship with music from Grammy-nominated composer Austin Wintory. This is the beginning of the journey, but Schatz has a few advantages he didn't have with Monaco, and experience is only one.

"We plan on keeping our costs low, like we did with Monaco," Schatz said. "And Monaco made a lot more that what we would need to make another Monaco." He has the luxury of time and the ability to self-fund development, which means the game will be out when it's ready.

"At some point we'll do early access," the developer told Polygon, "but not before it's worth buying."