Yoshi's New Island earns its place in a classic series.

Its pastel-hued aesthetic suggests that a very talented crayon-wielding child drew the entire thing and animated it by hand. But beneath the twee exterior lies a well-designed platformer that takes advantage of its unique features, separating it from other Nintendo mascot platformers. It takes many of the sensibilities of the older games in the series — including an experimental streak and a focus on exploration — and updates them for Yoshi's 3DS debut. And it wisely trades on nostalgia for previous titles. The result is a game that's equal parts smart and sweet.

As in three previous Yoshi's Island games, Mario's sidekick Yoshi is the star of the show here, carrying an infant version of Mario across a series of 2D stages while running, jumping and spitting eggs at enemies. Whenever Yoshi is injured, Mario floats away in a bubble and sobs — a shrill shriek that will haunt your nightmares — leaving players with a limited time to get the baby back onboard or fail the stage.

The game is equal parts smart and sweet 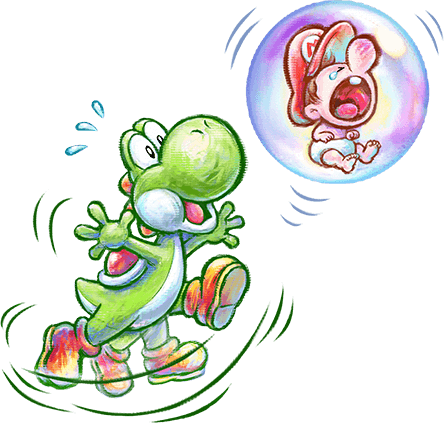 This mechanic isn't new to the series, but it adds a sense of urgency and challenge to the gameplay. Yoshi's New Island is intelligently designed around this, with enemies who will try to steal baby Mario and stages that balance open space with tighter gauntlets. The former are technically easier, but give Mario more room to fly away from you. The latter are tougher, but tend to keep Mario close. It's a delicate balance, and the designers nailed it.

Yoshi's New Island's stages are also well-attuned to the star's unique abilities: Yoshi can swallow most enemies, turn them into eggs and fire away at obstacles. This lends the game an emphasis on exploration and mild puzzle-solving over pure acrobatics. It's an appealing mix, and I enjoyed taking my time searching for secrets and stumbling upon rooms tucked away with goodies. Yoshi's New Island always made me feel like my efforts were worth it.

There are still plenty of white-knuckle moments in Yoshi's New Island. While the pace is a touch slower than some of the more manic platformers released of late, the platforming is challenging throughout. Stages are peppered with vehicle sections — obstacle courses that see Yoshi transformed into a mine cart, bobsled, helicopter or other improbable transmogrifications. These exciting palette-cleansers are the only motion-controlled sections of the game, and they work well. With one exception — the submarine.

There are plenty of white-knuckle moments

The infuriatingly slow submarine sections gave me a headache. Though they were extremely rare, these segments stood out in an otherwise well-paced experience, resulting in a string of expletives that seemed a little harsh, aimed as they were at such a sweet, dopey character. Sorry, Yoshi! 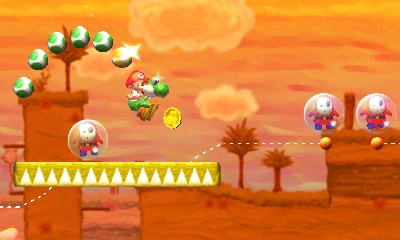 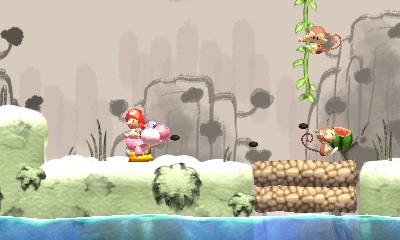 The castle stages fare better, each with a consistent challenge and a boss battle that offer Yoshi's New Island's finest — and most creative — moments. I fought a version of Kamek (a sort of Wizard Koopa) that had me spitting eggs at directional arrows in a fast-paced puzzle, a giant spiked snowman that called for swift egg-slinging and a ridiculous undead fish that sometimes morphed into a submarine.

These battles are unorthodox and fun, and I looked forward to finding out what the game was going to throw at me next. And the challenge level felt just right. In every battle, I was able to get my bearings and figure out the pattern before the gloves fully came off. This keeps the game feeling light and enjoyable, suiting the experimental style of the fights and Yoshi's own toolset.

The game at large has a similarly gradual learning curve. Yoshi's New Island ramps up slowly, starting with gentle courses and evolving into stages that require perfectly timed jumps and throws over lava or bottomless pits. And if you start dying in any given level, the game offers help in the form of a pair of optional "flutter wings." If you still have trouble, a golden version of the wing spawns in, giving you an infinite jump and invincibility. I didn't need these aids often, but I was glad they were there when I did. They kept things moving when I got stuck, and kept frustration to a minimum, even in the toughest stages.

Yoshi's New Island earns its place in a classic series

By the time I was done with Yoshi's New Island, I was mimicking the cutesy sound effects — they had so successfully wormed their way into my brain — and looking forward to the chance to perfect earlier stages. Yoshi's New Island won me over early, and it kept me going even when I started to suffer from a touch of platformer fatigue. Its sense of humor and experimental streak keep the game fresh throughout, and allow Yoshi to stand apart, even in a crowded season for Nintendo's core properties. There's always room for cute — especially when it's this smart.