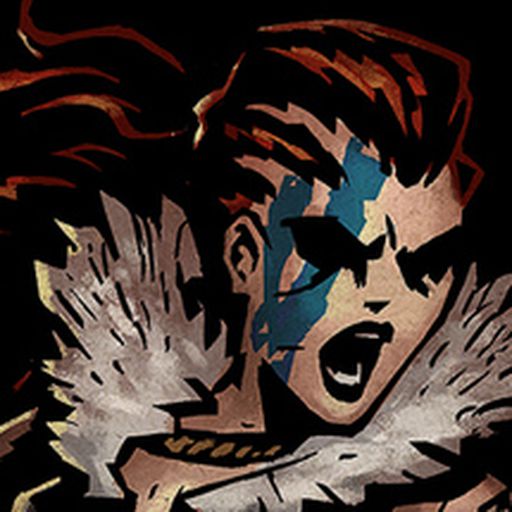 I hit my stress cap and popped to "Afflicted" status during the third week of the Darkest Dungeon Kickstarter — the culprit being the last two months of intensive work and constant decision-making.

My own personal Affliction is Irrationality — the pathways in my brain normally so devoted to logic and reason can become twisted like gnarled overlapping roots, and I'll start jumping to wild conclusions and emphatically arguing points I don't even necessarily agree with.

It's not the most productive of behaviors, but I guess everyone has their ways of acting out. The funny part about developing a game about stress is that each time something like this happens now, there is a little piece of me that mentally observes: "This is just like in the game."

Creating Darkest Dungeon has helped us deal with classical heroes as real people with weaknesses both physical and mental. Dungeons are fairly unpleasant spots in general, and adventuring is a tough vocation. It's a good excuse to put pressure on someone's fear of death, closed spaces or the dark. There are few phobias you can't attack in some way in a fantasy dungeon setting.

Our goal with Darkest Dungeon has always been to put some of the human element into the long established and well-loved genre, and this means reducing agency somewhat. How tough are heroes when the chips are down and the stakes are high? Will they stand up to the challenge and be present when all is counted? Or will they collapse under the pressure? Everyone has a breaking point.

The player manages a roster of heroes and groups them up into parties of four for expeditions into the various dungeons around the corrupted Estate of her fallen ancestor. The game features turn-based combat and roguelike exploration, but the "hook" of the game is that the heroes are flawed and you have to attend to their mental status as much as you do their hit points.

Most RPGs are built upon 100 percent agency, meaning the player has full control over the characters, except maybe when they are hit by a sleep or confusion spell. War games have long modeled the concept of morale as a game mechanic, because morale can be every bit as important as troop equipment, training and supply lines. Battles — and wars — are won by steely resolve, look at London during the Blitz, or lost by something as human as the onset of panic.

Humans are very complex creatures in general, and behavior when it comes to stress is no less complex. When pushed to the limit, many have endured things that would seem impossible. Read Laura Hillenbrand’s Unbroken and tell me you could survive what real life hero Louis Zamperini did.

That's one extreme. Going into a rage-filled tantrum upon receiving your Starbucks at non-optimal temperature is the other. Or maybe your month has been filled with stress, and that coffee was the one thing you were looking forward to to relieve some of the pressure.

Stress is gamified in Darkest Dungeon, and all kinds of adventuring events can cause or heal that stress. The appearance of a ghastly creature could cause stress, especially if you have a phobia of it. A fellow party member landing a critical hit might reduce stress, because now you have hope.

When heroes reach a stress ceiling, they face a Resolve check.

If the hero passes the check, they’ll enter a heroic state of sorts. If they fail the check, an Affliction will onset. Afflictions include things like paranoia, greed, abusiveness, depression, detachment (shell-shock), and my personal favorite, irrationality. There are also "quirks", which represent all manner of smaller flaws, proclivities, and so on. Some examples are Heavy Sleeper, Maggot Hater, Lightweight, Lecherous and Hoarder.

But the Afflictions are the big deal. When in an Afflicted state, heroes are prone to acting out in a variety of ways.

Human dynamics have been dramatically portrayed in other media such as Band of Brothers, Aliens, The Thing, Lord of the Rings and others. The decision to fight through seemingly overwhelming adversity is a major aspect of Gravity. Continuing to fight for your own survival, or the survival of those around you, is made much more impactful when the viewer gets a sense that giving up is as real a danger as the monsters, environment or other characters in a scene.

The moments in stories such as those are captivating, and sometimes missing from games — would Boromir’s corrupted attempt to snatch the ring have happened if it was up to the player? Aside from agency, though, actual heroism is made more meaningful by the prospect of failure. Boromir’s last stand protecting Merry and Pippin is moving by itself, but against the backdrop of his previous flaw? Suddenly it's much more meaningful.

Less dramatically, we’ve been inspired by our experiences as managers and team leaders, which is precisely the role we are putting the player in.

To create game systems around stress and acting out, we’ve had to look a bit at how humans respond to stress. I’ve noticed a few key things:

Look around your workplace, or your family. You can probably quickly identify the "afflictions" that your colleagues and loved ones slide into. As previously discussed, Irrationality is one of mine. Maybe not the only one, but that’s all you get for now.

As a team leader at past jobs, I’ve learned to identify how people will react coming up to a deadline. That guy always panics. The woman over there never panics. The other guy gets mad when you ask him to stay late, but he’ll pull through. The woman working on sound design always acts like everything’s fine, but may not be there when it counts.

Now think of it like an RPG: Lincoln the Crusader is terrified of eldritch creatures — I better not ask him to lead the charge in the Cove. Junia is well-liked by the entire party — if she gives an inspirational speech while camping, it will go over well. Dismas the highwayman is a bit of a loner, though; speeches don’t go far with him, but as long as he has some time to clean his guns quietly in the corner, he'll be good.

The game invades my worldview so much, that observing human behavior has become a handy tool for shaping the Affliction system mechanics. "Ooh, that person's about to pop. Will they shake it off or are they going to become Afflicted?"

"Maybe a drink would bring that guy back down under 100 stress."

"Is that person a jerk, or are they just Afflicted?"

And so on. When you see someone acting poorly, it can be help to realize that you're seeing the tip of the iceberg, and that iceberg could be filled with terrible things. It's easy to understand that someone may lose their mind over being cut off in traffic if their evenings are spent holding their parent's hand in hospice care. It can be easy to focus on the straw that finally breaks the camel's back when you aren't aware of the rest of the load.

Darkest Dungeon is intended to be fun despite these heavy thoughts. It's inspired by the flaws of humans. Seeing heroes run from combat, refuse to take an action, steal an item for themselves, stress eat and cause everyone else to starve, or obsessively attack only a certain monster type are all game mechanics that you have to work around.

I always thought of stress as a really vague thing before working on Darkest Dungeon. People get stressed; it happens. Then they get unstressed. My friends and family know I tend to get stressed out and carry more of it around with me than I should.

Now I think of it more concretely. A day off after a hard week of work? Less stress. A couple beers out with friends? Stress likewise removed. Too many beers? Stress temporarily removed, will gain more stress tomorrow. Hit the gym? Stress removed and health increased. Dark Souls? That's a game, but it can add stress depending on your play style. No net gain or loss.

This perspective could lead to larger life choices. Maybe if I finally read that book on Zen and Buddhism, I can have a SHOT (Stress Heal Over Time) status effect buff permanently placed upon me.

Camping skills and the Town phase are very important in Darkest Dungeon for this reason. You have limited action points to spend on variety of character actions during "tactical camping." Bandage wounds, or give an inspirational speech? Set up perimeter watch or drink and revel?

The Town phase is the same way: What the heroes do while not adventuring is critically important. There is the Abbey, with its opportunities for prayer, meditation and flagellation.

The Tavern beckons others with promises of drinking, gambling and carousing. Whatever their poison, heroes can find a way to get their stress down. But if your best front-line Hellion is near her stress cap, can you really afford to leave her in town for R&R? Or will you take her down for one more run and risk her cracking up and doing serious harm to the other party members? 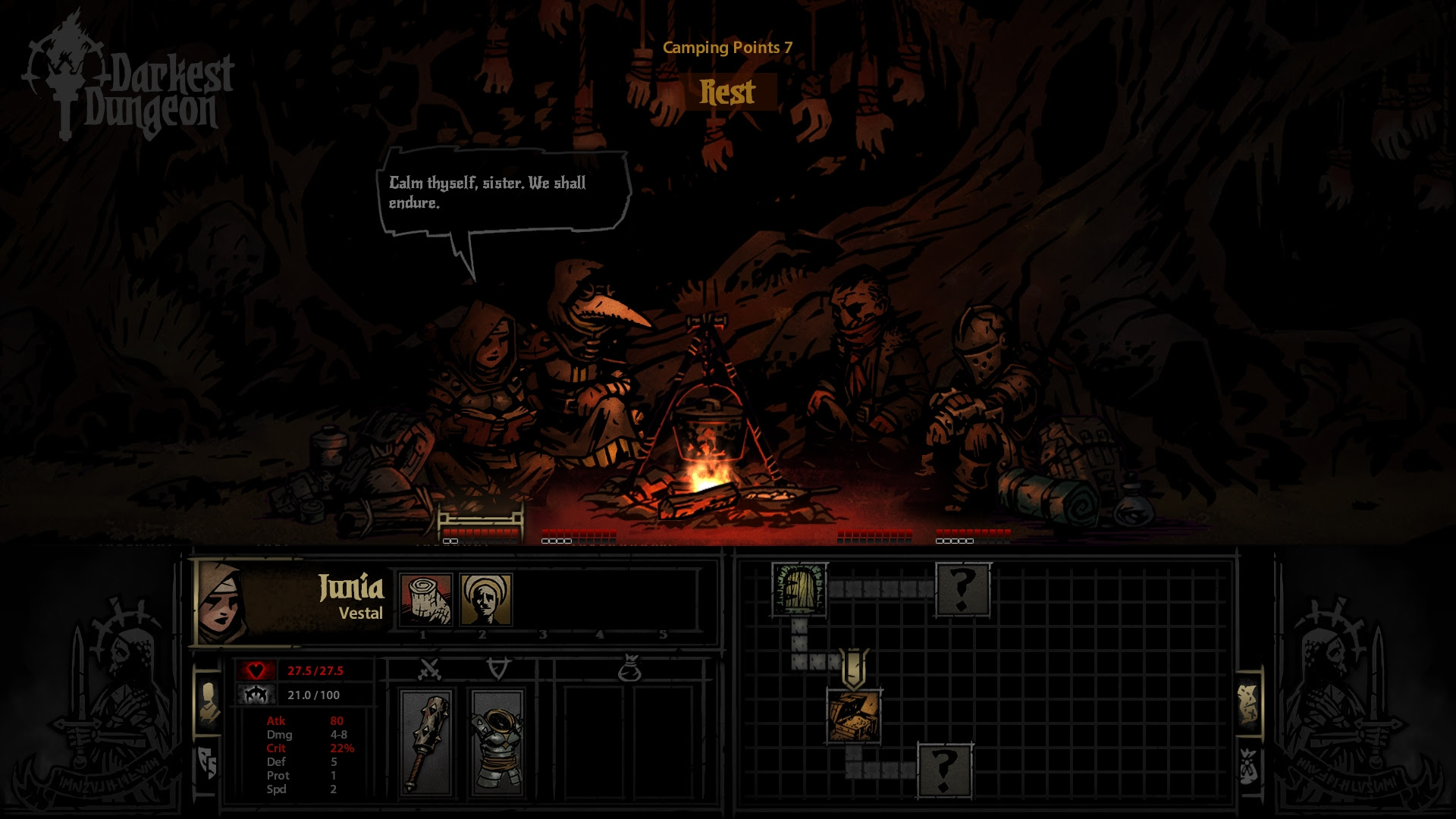 I've developed more self-awareness of how I act under stress, and how to take care of myself while working on this game. I've also gained a bit of empathy for others; once you think of stress as a cumulative process that can cause what seems to be irrational behavior, it becomes easier to let go of judgmental thoughts.

No one yelling at their kids in a grocery store is happy to be doing so, and it may not mean they're a bad parent. It could just be a snapshot of a bad day in the lives of good people. It's important to find our own ways to deal with stress and to lighten the load, and it might take a video game to cast some light on how that process works. Welcome to Darkest Dungeon.

Tyler Sigman is the Co-Founder of Red Hook Studios in Vancouver. Previously, he was the designer of HOARD, the boardgame Crows, Age of Empires: the Age of Kings DS, and more. Red Hook’s first title, Darkest Dungeon, is in the final days of its Kickstarter campaign.