The classic three act story structure — a setting and character setup followed by a confrontation that ends in a resolution — is popular among writers in all media. But ditching this convention, despite having been proved a successful storytelling method, is a beneficial move for video games because of the medium's unique demands.

Speaking in a panel at GDC this morning, Riot Games narrative lead Tom Abernathy and Microsoft Game Studios' designer Richard Rouse III said video games have storytelling opportunities that film and TV aren't as suited for. Because of this, games require different structural needs when it comes to their stories. The Hollywood-favored three act structure — which was adopted in the third century around the time of Aristotle — isn't always the best fit for video games.

Solid dramatic structure will make a story better, Abernathy said. The idea of an ideal story structure has been around for a long time, pre-dating 19th century media. The story setup begins with a rising action, hits a climax and then comes to resolution in a descending action. This framework uses plot as the force driving the piece forward. Not all films adopt the three act structure, however, and while it does work well for films it's not always the best. 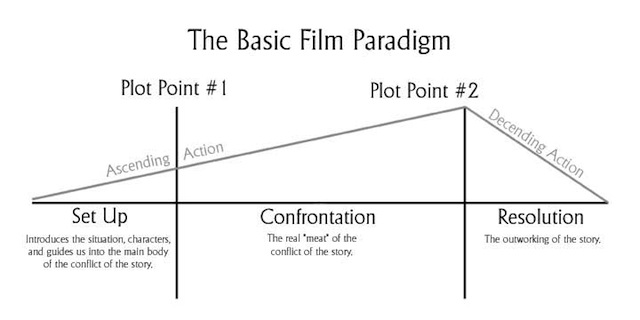 Rouse used Uncharted 2: Among Thieves as an example of a game using the three act structure. The game includes an introduction already en media res, a 10 to 12 hour midpoint that includes two "pinches" — or major pieces of the plot divided into two major missions — and a resolution ending on a climax. The whole story is bookended around its midsection with two major plot points and is bolstered by the fevered love triangle between Nathan Drake, Chloe and Elena.

Longform serialized storytelling, such as what has been used in television in recent years, is something game designers can look to when settling on structure for their games, Abernathy said. Half-season or full-season arcs like on The Wire or Breaking Bad, or multi-season story arcs like on Game of Thrones, could work for games. These kinds of structures are scalable for video games, as evidenced in the success of Telltale Games' episodic series The Walking Dead.

Naughty Dog's The Last of Us has a similar story structure to The Walking Dead; it's a serialized story that has characters coming in and out at different points and leaves players with one solid story thread — that of Joel and Ellie. You can impose three act structure onto the game, Rouse said, but in reality The Last of Us has more of a serialized setup in the way it treats its characters and their mini-arcs within the game.

Three act structure also won't work for massively multiplayer online games. This is because players can do missions in any order and skip many of them if they choose. Game writers have a greatly diminished say in the narrative structure of MMOs, and this is why some writers are drawn to it — players are allowed to roam and play at will and check out of a plot if they aren't interested in following it.

Abernathy and Rouse also cited a study which showed that a number of people asked to describe the plots of their favorite media were less likely to remember the plot of games than those of TV shows and movies. Players also were more likely to remember characters than they were plots. Simple plots work best, Rouse said, because games make players focus on gameplay — combat, solving puzzles and such — making it less likely they will retain individual bits of plot.

"Game narrative is almost always extremely spaced out," Abernathy said. "There might be ongoing narratives with individual characters, but plot twists that come every 90 minutes or so happen right before you are about to get back into the gameplay and you're less likely to remember it."

In order to tell the story you want to tell, sometimes you have to subvert structure and throw it away. Stories like that in Papers, Please and The Stanley Parable are examples of games that do this. User research shows players don't remember plot, but the emotional hook of characters is what they will remember. Focus on character will help players engage in games but the characters' forward motion needs to align with the path developers want to lead players down. Ultimately, video game stories are not structured, Abernathy and Rouse said, and plot, in the end, is "highly overrated."