After years of waiting, Snake is back in Metal Gear Solid 5: Ground Zeroes.

But beyond offering a sampling of some of the enhanced gameplay systems being added to the series, Ground Zeroes is hardly worthy of the franchise moniker.

Metal Gear Solid 5: Ground Zeroes picks up after the events of the PSP title Metal Gear Solid: Peace Walker. If you'd like a rundown of the backstory, allow me to direct you to the Wikipedia entry for that game, because bringing you up to speed here would take far too much of your time. As an alternative, Ground Zeroes has a "Backstory" option in its main menu that fills players in via 11 (!) dense pages of text. 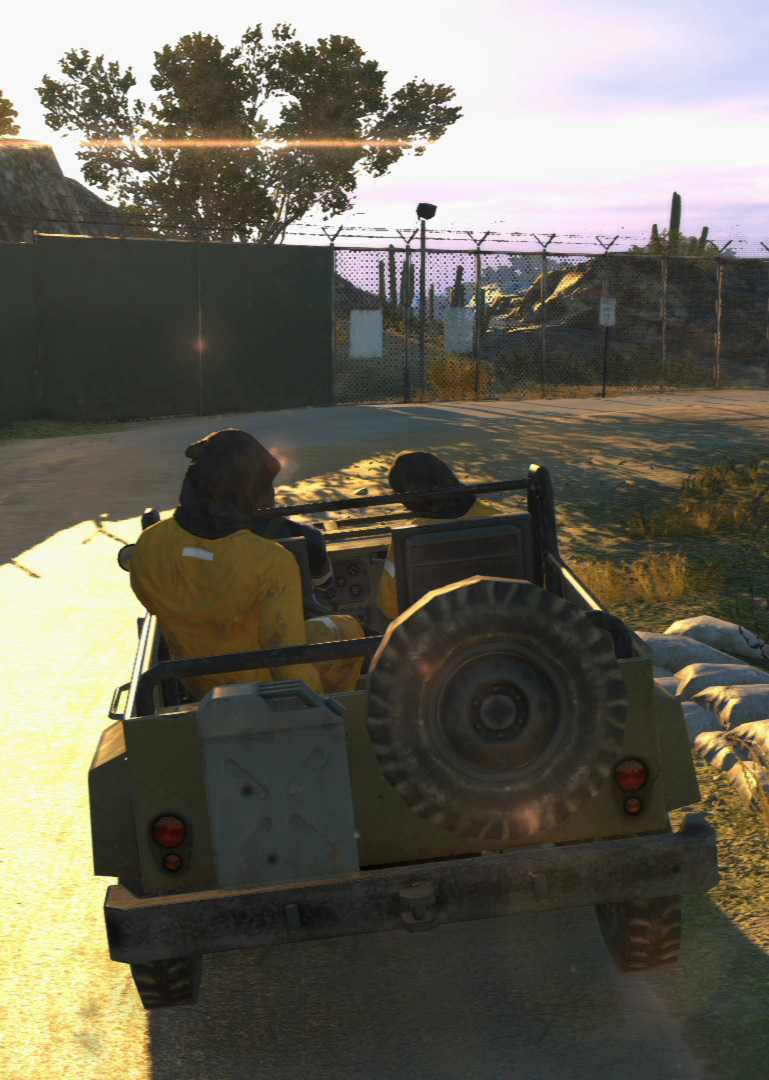 Suffice it to say, after the parsable plotting of Metal Gear Solid 3 and 4, Metal Gear is back to complex storylines with an insane number of interlocking characters and agency acronyms. You're going to want to take notes. Thankfully, all that added baggage can take a backseat if you prefer — Ground Zeroes tasks Snake with infiltrating a military base to find two of his former compatriots in a relatively simple search and rescue mission.

Ground Zeroes starts with an undeniably gorgeous 10-minute cutscene, a long take following mysterious soldiers and a badly scarred commander as they survey an island military base. The cutscene demonstrates some of the impressive tech behind the game, specifically with body and facial animations. There's a level of detail here that feels undeniably next-gen, with crisp, realistic-looking characters that don't fall into the chasm of the uncanny valley.

Once the gameplay begins, Ground Zeroes remains visually impressive — there's no pre-rendered trickery. Snake begins his mission on a cliff's edge in the midst of a rainstorm, and the attention to detail is remarkable. Tents whip in the wind and puddles form around Snake's prone, soaking wet body. Searchlights scan the camp looking for intruders, stark white against the pitch-black sky.

Ogling aside, Ground Zeroes is the biggest departure for the series since the original Metal Gear Solid. It's still a game about stealth, of course. But where Metal Gear previously relied on Snake's numerous gadgets, Ground Zeroes focuses much more on observation. The all-important radar that showed the location of every nearby enemy in previous games is gone. In its place, Snake can mark visible enemies with his binoculars, making them appear as visible waypoints wherever they walk.

This marking system (similar to the one seen in Far Cry games and more recent installments in the Splinter Cell series) is useful when you've got a high vantage point. Without the aid of an infallible radar, you'll be sitting quietly and listening quite a bit. The audio design in Ground Zeroes is fantastic, with every guard's footstep echoing off whatever surface they're patrolling. 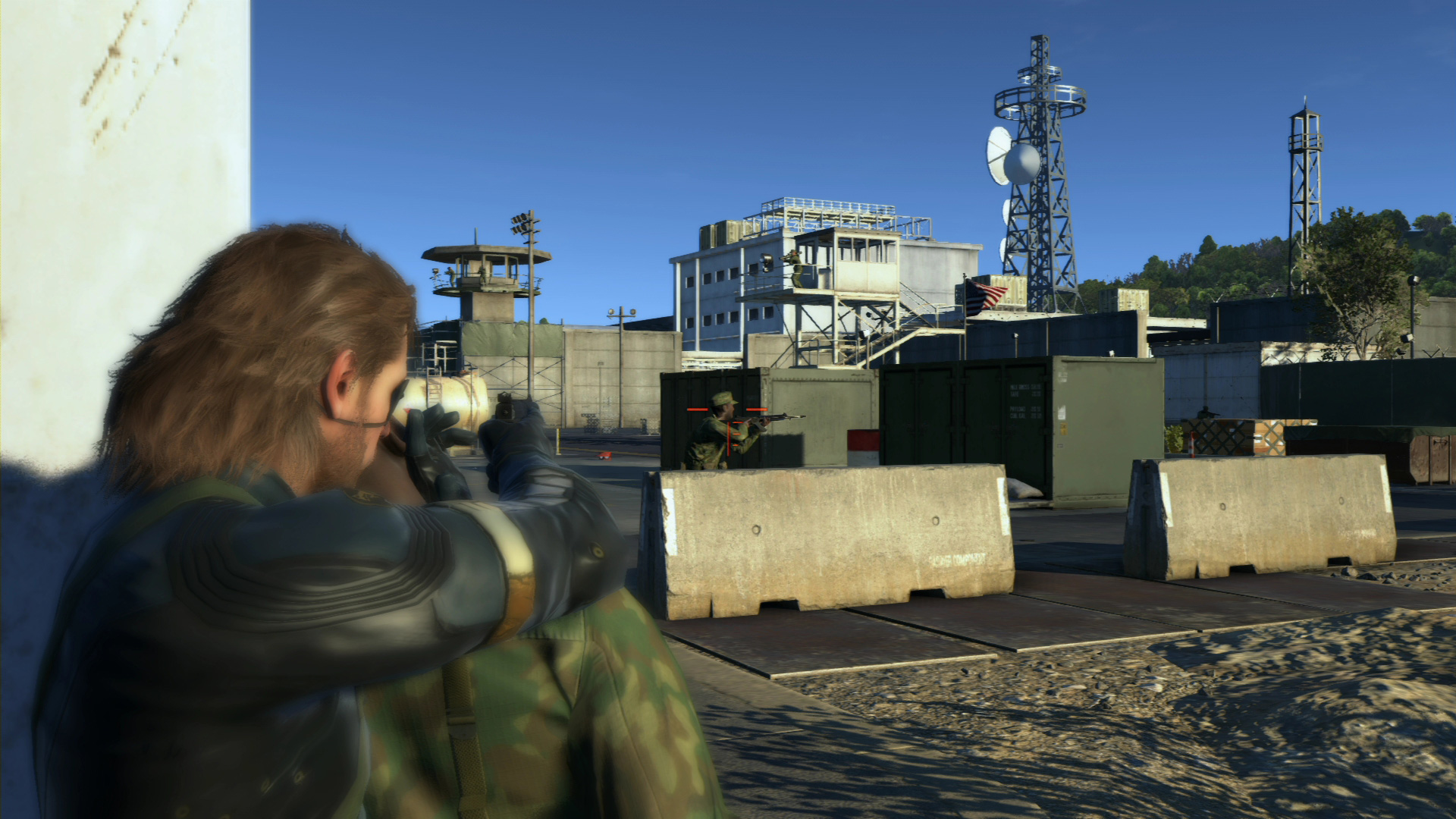 I'm not sure that this more patient system is an improvement, though. There were numerous times when I'd carefully surveil an area, listening for guards, only to turn a corner and stumble head-first into a soldier that simply wasn't moving. Also, without radar and vision cones, it's never clear when you'll be spotted and when you won't.

This is especially frustrating given that the gameplay doesn't really hold up once you've been spotted. You've got a number of weapons to lethally take down aggressive guards, but they all feel puny and ineffectual, taking four or five shots to down a single guard on the Normal difficulty setting. Strangely, melee attacks are far more useful, letting you knock out half a dozen guards in a row if you're slamming the button fast enough.

Compared to the stealth gameplay, the action feels half-baked — every time I was spotted, I found it more enjoyable to reload a checkpoint, rather than run away and hide for a few minutes. I started to get the hang of staying sneaky after about an hour of gameplay, though. And then the main mission ended.

after just a couple hours, I was tired of walking the same dirt roads over and over again

All told, the titular Ground Zeroes mission took me one hour and 16 minutes to complete, including cutscenes and about eight deaths. That's not the game clock, either. That's real time. The mission is not only short, it's dull. Your objectives amount to going to one place, rescuing a prisoner, going to another place, rescuing another prisoner and then calling in a helicopter to get you out of there. Underwhelming doesn't begin to describe it.

Upon completing the main mission, Side Ops are unlocked. These are missions that take place on the same military base, but with different objectives and parameters. For example, one side op asks you to assassinate two rogue agents; another has you fly in on a helicopter and rescue an agent while blowing the base up with a grenade launcher.

These Side Ops help to pad the play time and value of Ground Zeroes, but you're still returning to the same map, over and over again. And it's not like the map is enormous, either. At a full sprint, you could travel the diameter of it in about five minutes. Also, because the Side Ops take place at different times of day, they highlight the game's visual limitations. Environmental graphics that looked impressive at midnight in a thunderstorm look washed out and dull on a clear, bright afternoon.

Devotees may get enjoyment out of replaying these missions over and over again, getting higher scores, unlocking new weapons or finding hidden Moai statues, but after just a couple hours, I was tired of walking the same dirt roads over and over again.

It's admirable that developer Kojima Productions was willing to toss long-held franchise tenets out the window in favor of re-imagined Metal Gear Solid gameplay. And it's possible that in a more complete game, these additions might shine more brightly. But Ground Zeroes is hardly the right venue to demonstrate the future of the franchise. It's staggeringly short and unsatisfying, feeling more like a cash grab than an honest-to-goodness installment in a beloved franchise.