Monument Valley: the quest for a game everyone can finish

Share All sharing options for: Monument Valley: the quest for a game everyone can finish

Monument Valley will be hitting iOS devices some time in April, and if executive producer Dan Gray has his way, it will be one of those rare mobile games that people actually play to completion.

Developer ustwo has been working on Monument Valley for 10 months. The team of 8 has a wide breadth of experience from across the U.K. development scene, including Gray's own past at Hello Games and Lionhead. But it seems safe to say that this project is not quite like anything they've done previously. The goal is a short, easily consumable game that not only appeals to a broad audience but is able to be finished by anyone in that audience.

And it all started with a single piece of M.C. Escher-esque concept art.

"We looked at the piece of concept art that inspired it now that the game is complete," ustwo director Neil McFarland told Polygon during a meeting at the Game Developers Conference. "It's not very far away from what it looks like!"

I'm not surprised. As I play through the first few levels of Monument Valley in front of the people who made it, it's hard to hold back from immediately congratulating them on how gorgeous it looks. Each level of the game is full of walkways connecting and breaking off at strange angles, parapets and towers shooting up from the ground, and gears that can be manipulated to flip things around, allowing the little girl I control to reach new heights in the level.

Since actually printing from an iPad isn't an option, the team has included the next best thing. After completing a level, two options appear. If you tap the circle on the bottom of the screen, you proceed to the level select screen and go on to the next area. If you tap the camera icon at the top, you're allowed to freely move the camera around the level, zoom in, and even implement Instagram-esque filters. When you've lined up the perfect shot, you can take a picture and save it to your iOS device or share it via social media networks.

While the visuals are beautiful, they've also created some difficulties in how ustwo presents the game and what other platforms they might be able to take it to. "We've had a lot of attention from various platform holders," Gray says, noting that since the game was made in Unity it's actually not very difficult to port. Or it wouldn't be, if not for a tiny issue: the game was created to play in portrait mode.

"It's hard to make that work on a regular screen," McFarland says. "Our art director is extremely frustrated that we can't do trailers in portrait mode on YouTube."

ustwo is not discounting bringing Monument Valley to new platforms yet — an Android version is already confirmed, and the team says they have kits for multiple other platforms waiting for them back in London — but they're going to need to figure out a solution that fits the game first. "We try not to compromise," says Pashley. "If the game looks best in portrait, we want to keep it that way." 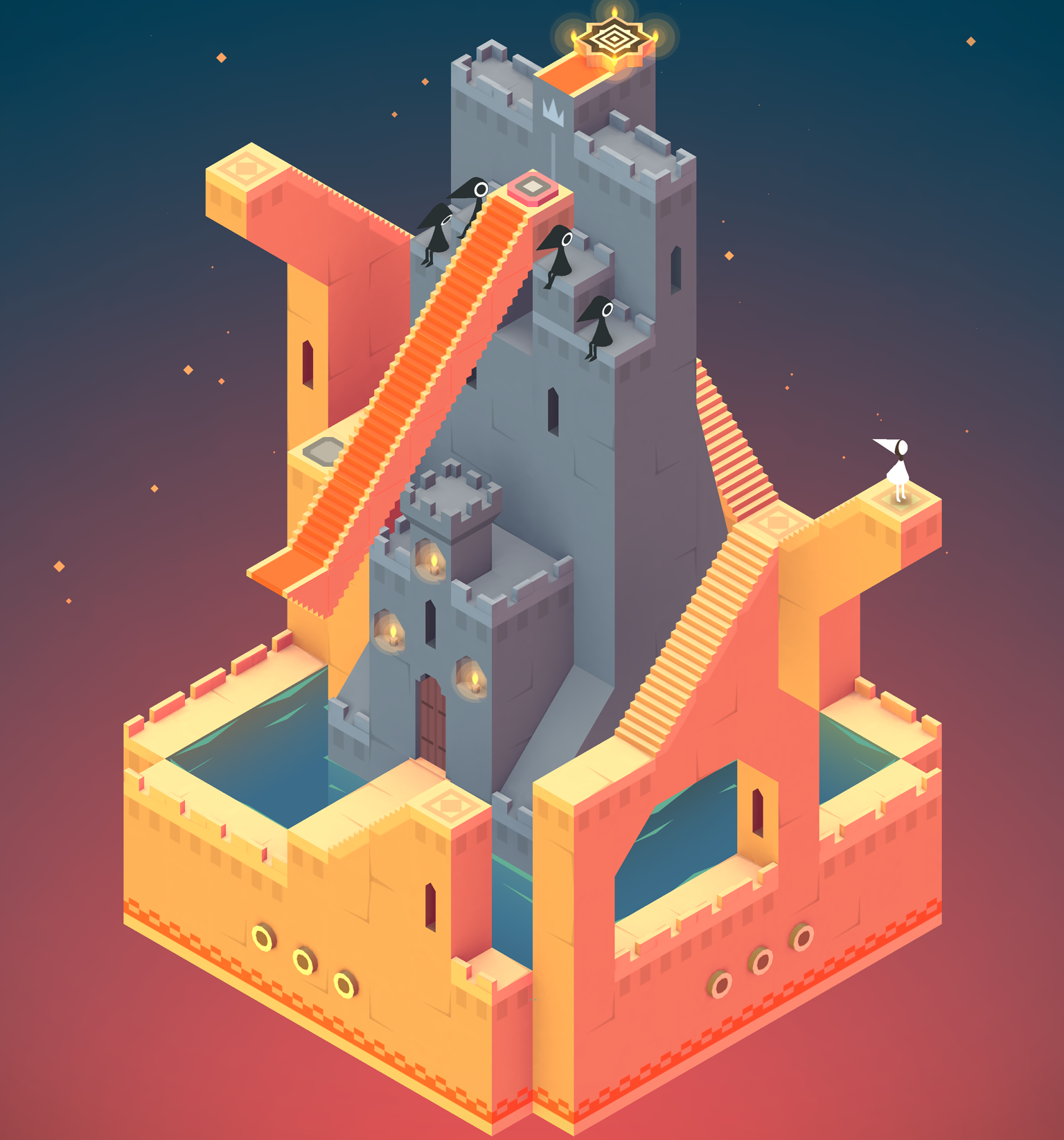 The further I get into the complete version of Monument Valley being shown off at GDC, the more convinced I am that ustwo is on to something special. The elegant, brief levels never stump me for longer than a couple of minutes, but they exercise my brain muscles just enough to be satisfying. Each level also does a great job of introducing new elements, slowly piling one on top of another so that I have time to learn each naturally before they all mix together.

This is all by design. Unlike most indie developers, ustwo has invested heavily in playtesting, figuring out where players get stuck and polishing levels until they're the perfect level of challenge.

"With so many games, people never see the end, because there's so many hours of gameplay," says Gray. " We wanted to make a game where you see the whole thing."

Part of that extends to length as well. From the 1,000 beta testers ustwo used on the game, the average completion time was around 90 minutes. If you're especially good at piecing together the game's visual puzzles, it will likely be even shorter. But the team wants it to be a satisfying 90 minutes — all killer, no filler.

"There's a weird mirror between the use of the player's time and the use of our time as developers," McFarland says. "We want to give the player as much as we can with the time they've got, and it's the same for us as developers. We want to make sure we're spending our time doing stuff that we really love — not grinding on making loads of padding to fill out a fixed, desired time for the game."

Pashley keeps coming back to a music comparison: "If you write an album, you usually want people to listen to the whole album, not stop after the third song." Gray notes that his girlfriend's dad, who has "never played a game in his life," was able to finish Monument Valley.

Part of the reason ustwo is so confident about the short playtime for the game is that they're hitting a price point to match. Though nothing is set in stone yet, the team expects Monument Valley to launch at around $4. The game will have no microtransactions, and the team is already planning a free update to add more content. They're open to the possibility of paid downloadable content for more difficult levels if the demand is there, but they're not interested in pushing players up against a paywall.

ustwo knows that all of this is a risk — a cheap, short, one-time payment game on a marketplace flooded with success stories that are all centered on finding ways to continue getting money from players over a long stretch of time. But it's a risk they're excited to take.