Share All sharing options for: Next-gen consoles may be getting horror game seen through the eyes of a child

A 2-year-old's journey through his own dark imagination might be coming to next-gen consoles, the developers of Among the Sleep tell Polygon.

In the game, which received nearly a quarter of a million dollars last May through a successful Kickstarter, players take on the role of a 2-year-old boy navigating the horrors created by his young imagination. The game is played from a first-person perspective and players can't ever fight back against the creatures that stalk them, instead they can only toddle, crawl and hide. They can also hug their teddy bear to generate warmth, which makes it a bit easier to see in the darkened byways of the game.

In a short demo of the game played on a PC, I had a chance to explore through a small section of the game.

The gameplay started out by grabbing a teddy bear lying on the ground in front of me. The game's first-person perspective, set noticeably lower than most games, and the stilted side-to-side movement of the walking is an immediate reminder that you're not playing a traditional first-person title. While the child can walk upright, and even run for a short period of time, crawling on hands and knees is the most reliable form of movement. If you run for too long, the child trips and falls. This simple stumble is a constant and powerful reminder that you are the epitome of frailty, a helpless 2-year-old.

Martin Mathiesen Kvale, the game's sound designer, said he was going for goosebumps in his creation of the game's audio.

The game's soundscape, coupled with the fear-powered look of the game, delivers a chilling experience: toddling through darkened hallways, trying to push open doors, or crawl under beds in the hunt for a missing puzzle piece. The section of the game I played started out in the relatively normal halls of a home, but after crawling under a bed and through a hole in the wooden floorboards, I found myself in a darkened forest surrounded by pools of black ichor. The sounds of the forest mixed with the lugubrious pops and bubbles of the nearby ponds.

After a few moments of exploring I discovered a key and soon after a lock to use it in. As I made my way deeper into the forest I started seeing signs of the game's first threat, an almost tree-like thing with towering thin legs and a head of sticks. It stalked through the woods at first, searching for something, for me. 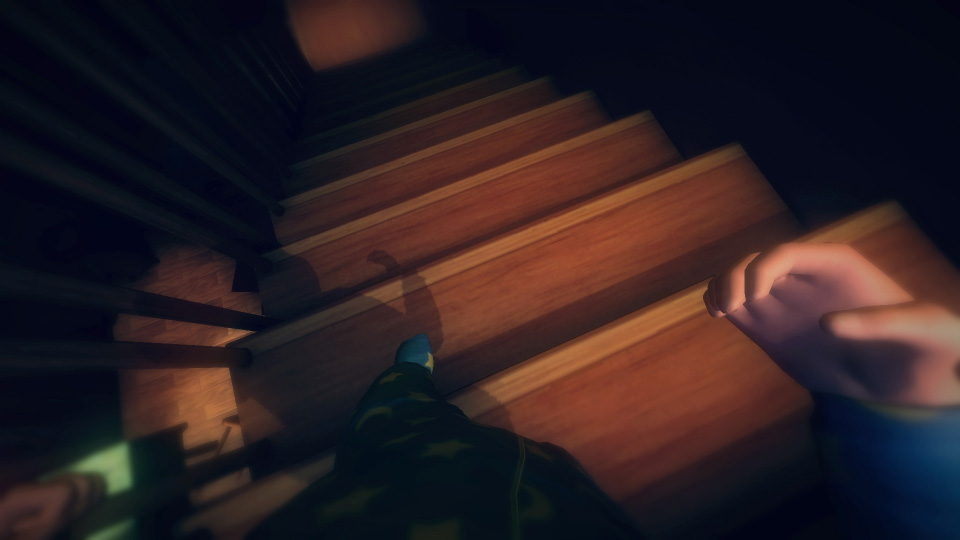 Initially, I was drawn to it, trying to catch a better glimpse of what it was, but the more I saw of it, the less I wanted to see.

Once it noticed me it turned its head and screamed, the air around me shimmered. I turned and started to run. After a few seconds I stumbled, crawling on hands and knees to a nearby log to hide. My view was blocked, showing only the creature's impossible stick legs as the thing stalked back and forth looking for me.

As a 2-year-old your only recourse is to run and hide. There's no fighting back, no weapons. There is one power of sorts, an ability, if things get too dark, too scary, to light the darkness.

Hugging your Teddy Bear, something you can only do while standing, delivers a warm glow, calms the music of the game and dulls the sharp edges of a frightened child's perception of the world around him.

"We try to change the soundscape when you're safe," Kvale said.

The developers of the game, which is due out this spring on Mac, Linux and Windows PC, are reluctant to talk too much about the story, but they assure me there is one and it's very meaningful to the experience.

"We tried to use the horror genre as a tool to tell the story around a specific thing," Krillbite's public relations Adrian Tingstad Husby said.

The story is what the team is spending most of their time on now with the game, said Ole Andreas Jordet, CEO and programmer for the studio.

"It's going to be a moral story, but we don't want to shove that moral down someone's throat."

PlayStation Stars: Everything you need to know about Sony’s new rewards program