Share All sharing options for: Developer of 10000000 shares game data and inspiration with other mobile devs

Ninety seconds. That’s the average amount of time players spend in a session of Luca Redwood’s mobile game 10000000. It’s a minuscule amount of time, but players do it over and over again — more than 60 million times to date, says the developer.

In his talk Tuesday at the 2014 Game Developer’s Conference, Redwood detailed the evolution of his hit game, and used that story to draw conclusions about the fiercely competitive mobile space.

10000000 is a dungeon crawler powered by a matching game. Players assemble strings of swords to attack monsters, or shields to defend themselves. But Redwood says it didn’t start there. At times it was a turn-based game, others a much more traditional matching game.

Redwood says that the decisions he made in refining his design all centered around the goal of creating "the experience." And the experience that he had in mind was of a game that could be played while waiting for the train.

"I figured that on the tube to work it’s around 25 minutes," Redwood said. "Sometimes the tube’s so cramped there’s no way even to play a mobile game squashed in a corner. So in that case, it would just be played at the tube stop — waiting for the train … [for] 2 or 3 minutes."

Redwood built more than a half-dozen prototypes, all with the goal of improving the quality and consistency of short play sessions. Some moved too fast, others too slow, while still others left the player disconnected from the action on the screen. Redwood says that the matching mechanic, even though he disliked it, was the only method he could find to create sessions the right size to give his players the experience he was looking for. So he threw out the rest of the game, and charged ahead.

Aside from the tiny, addictive play sessions Redwood credited the game’s narrative for it’s enduring success. Matching games aren’t known for their story, but Redwood says that he baked multiple plot points into 10000000 by creating obstacles for the player to overcome on their path to getting stronger.

It is those plot points that paved the way for the emotional payoff in the game’s conclusion. They also helped the player past his art style. 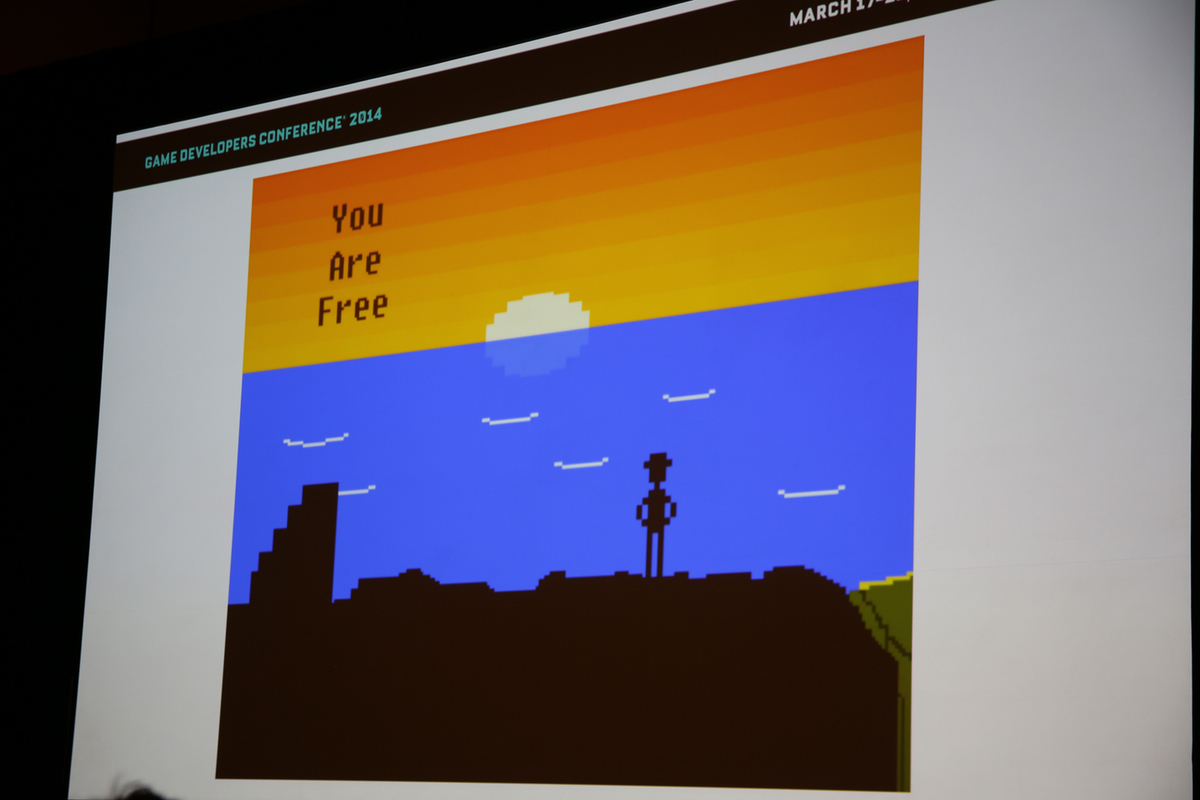 "This is not good art," Redwood said. "I’m not an artist. But people love it … And they love it because on its own it’s crap. But after 6 or 8 hours in a dungeon it feels really good."

At the end of his presentation, Redwood revealed that 10000000 has sold over 300,000 copies, earning him over $500,000 personally. Redwood says that his willingness to spread his title over multiple platforms, including Android and PC, gave him an incredibly long and consistent sales cycle. Across all platforms, including Android and PC, the game still earns him on average $100 a day.

"There’s loads of room in the market to be making a paid game," Redwood said, telling developers that if they don’t want to build for the free-to-play market they don’t have to.