Share All sharing options for: How Alone With You's dev plans to avoid creating a 'weird love simulator'

Indie developer Benjamin Rivers wants to create a romance game with attachment. Or, as he jokingly calls them, "real feels."

The latest project from the Home creator is billed as a "psychological romance" game. Announced officially earlier this month, Alone With You follows the last surviving crew member of a failed terraforming project. Players have only an AI companion to keep them from getting lonely, at least to begin with; as the game opens up, players will discover new characters. It features exploration and adventure, but it's also a love story intended to mess with your head, Rivers told Polygon during a recent interview at Game Developers Conference 2014.

"I really wanted to make a romance-focused game — like a dating sim idea," Rivers said. "But dating sims are all kind of the same deal. They're all genre-specific, they're often culturally specific, and they don't vary a whole lot."

The problem, Rivers continued, is how most dating sims present their romantic interests: as something to be gained, rather than well-rounded characters.

"[Dating sims] treat romance as an objectification, systematically," Rivers said. "Your goals are to achieve a human as if they were a prize through a series of tasks or whatnot. It's almost like the only romance game that makes sense in the context of how they're usually presented would be a very old fashioned idea of a suitor winning the hand of somebody ... You're winning someone's affection through certain tricks."

Titles such as Persona 4 stray from this formula by giving you the chance to spend time with characters, making the process "a little bit less creepy." Most romantically driven games lack the same conversational element, Rivers said. Characters leave themselves open to your advances and aren't put off if you reject them.

"Sometimes you often wonder if these games are a little dangerous, because they've over-simplified things to such a degree that if that's your first foray into this idea, oh boy," Rivers said. "I really hope you don't try that in real life, because it's going to be difficult."

Alone With You will keep players in an ongoing conversation, thanks to the game's AI companion. The protagonist is more of a passive force, made gender neutral to keep options open for those of all genders and sexuality. Moreover, Alone With You will capitalize on the common tropes that appear in romance games to mess with the player's emotions. Rivers wouldn't elaborate on who players will be romancing, but called it his Hitchcock twist.

"I want you to feel ... and think about these things," Rivers said, "and start to question motives, or start to wonder what's going on, or start to pay attention to what characters are saying to you because you are emotionally invested. And it's not about fear in this case, or dread (like Home), but it's more about ... seeking approval, wanting to form a connection, or feeling a bit of a loss if it's not where you think it should be; all those things dating sims try to do but they're just a little bit ham-fisted." 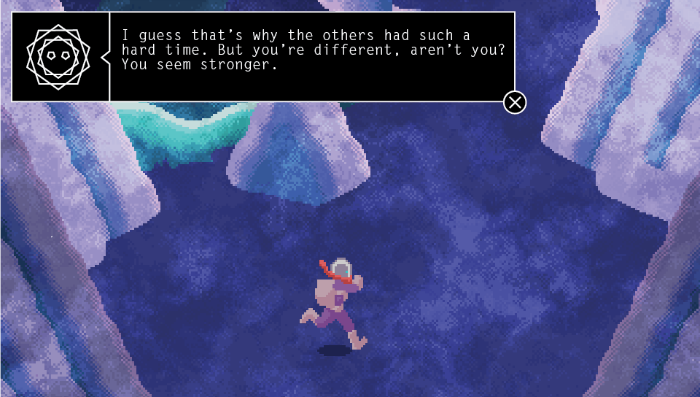 Rivers has not yet announced release platforms or a date for Alone With You, which he says is still very early in production. He hopes to create a game that focuses less on achieving a goal or hitting a high score, and instead takes players back to characters they miss. Unlike Home, which is intended to be a single-sitting experience, Alone With You will be more of a slow burn.

"What I really want [players] to do when they press start and play, [is to] feel like they're in a world and it feels a little bit real. And through interactions with this character — whenever they turn the game off and they come back to it the next day — it should feel like they're coming back to a person that they know."