Why not knowing is Alien: Isolation's most powerful scare

Share All sharing options for: Why not knowing is Alien: Isolation's most powerful scare

Creative Assembly isn't the first developer that pops into my head when I think about first-person action games. They're not even on the list when I think about survival-horror. Yet they're Sega's latest hope for the long struggle to create a worthwhile game based on the Alien franchise. And after some hands-on time with Alien: Isolation at the Game Developers Conference, I think they have a chance to actually pull it off.

"We built a technical demo," says creative lead Al Hope, when asked how Creative Assembly managed to convince Sega to give them this chance in the first place. "It was more of a mood piece. We recreated the medical lab from Alien, but then we duplicated it and smashed it up. All of a sudden there's a story going on: Why has this one been left but this one has been wrecked?"

At this point design lead Clive Lindop interjects to explain that this isn't the regular Creative Assembly team people might be thinking of as well. "A substantial number of people on the team building the game came from a number of other studios around Europe and the U.S. to work specifically on Alien," he says. "I was part of that wave of new hires."

The vision from this team impressed Sega. Hope finishes his story of that early demo: "It ended with this absolutely enormous alien that hadn't really been seen before in video games. It was almost majestic. It was so confident, it completely owned the space. You knew you couldn't do anything about it. Everyone we showed it to just went, ‘We'll have that please.'"

Hope isn't lying about the awe-filled emotions this creature inspires. For as much as other games — more closely based around James Cameron-helmed sequel Aliens than the Ridley Scott-directed Alien — have had players mowing down hordes of unsettling creatures, the moment I'm in the demo for Alien: Isolation, it's clear that I'm helpless against this single, massive opponent.

For the demo, set about halfway through the game, I'm playing as Amanda Ripley. The setup is minimal, but I know that I need to access a computer that may have important information. I also know that the horrific creature that's been stalking me is already in the area somewhere.

Part of Creative Assembly's approach to Alien: Isolation is subtlety. Lindop believes that the alien doesn't need to be on screen at all times to scare you, pointing to Silence of the Lambs as an example. Anthony Hopkins' haunting portrayal of Hannibal Lecter took up a mere 16 minutes of the two-hour film yet was for many the most memorable part. Isolation's antagonist will surely be around for longer than 16 minutes, but the philosophy is to not over-do it.

That approach is on display for the first 10 minutes of the demo, as I explore a torn-apart space station. Every once in a while my motion tracker springs to life with a loud ping, sending my heart racing, but by the time I lift it up to look, whatever was hiding out in the shadows is gone. This whole segment exists to build up tension. The alien is somewhere out there, but it's not going to attack. Not yet.

Not until I get to the computer. 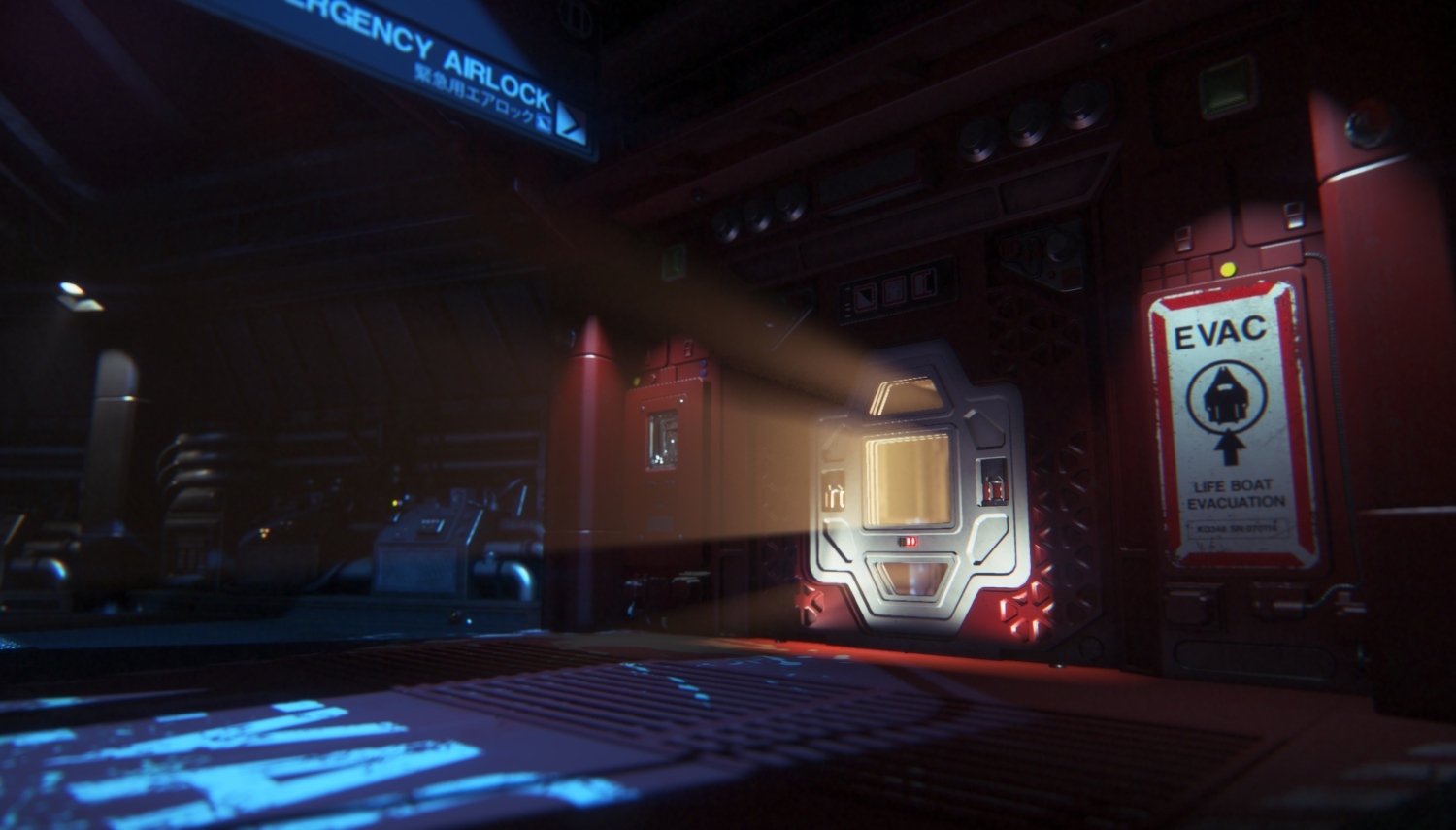 In a first-person cutscene, Amanda hides under a desk as the alien finally reveals itself, popping out of the ceiling. It's gigantic. "Some of the best scenes are when he rises up and looms over a human," Lindop says, talking about the original film. That same sensation has been captured here, though amazingly Amanda has escaped the creature's notice for now.

In the next segment of the demo, Amanda has to work toward an exit to the area while cautiously avoiding the alien, which is exploring and watching. Lindop cautions me that the alien isn't necessarily looking for me — it's scanning the environment for changes, waiting to sense anything that's not right.

In addition to crouching down and hiding under desks or around corners, I can stuff myself inside a locker. But this makes noise, which draws the alien to your location. When it gets close, I need to press one button to make Amanda hold her breath and another to make her lean back against the locker wall, preventing the alien from realizing she's there. He eventually leaves. But when I get out of the locker, that makes noise as well. It's easy to get caught in a loop of attracting the alien over and over until I screw up and die.

"Players are very sophisticated," Lindop says. "Players naturally try to take a game to pieces — to understand the rules and use those rules in their favor. In a lot of games, success is based on that." He points to stealth games as an example: "The idea is you learn where patrol paths are and what works to distract enemies, and that's part of the gameplay."

With Alien: Isolation, Creative Assembly wants to mess with expectations, punishing players who think they can game the AI in a simplistic way. "We want you to react to the alien as a real creature," says Lindop. He claims it will learn, adapt, reveal new abilities and generally not allow you to keep using the same tricks over and over. It certainly isn't fooled for long by my locker disappearing act.

At the end of the demo, Amanda hits a button to open a door. In a lot of games this would be where it pops into a loading screen or a cutscene. It's where you'd expect to be safe. Not so in Alien: Isolation. The door takes 25 seconds to pressurize, a process that's backed up by loud hisses of air and a big bright light flashing on and off. I didn't even hear the creature coming up behind me as I dumbly stared at the button, expecting something to happen. I didn't realize my mistake until Amanda looked down to see the sharp alien tail stabbing through her stomach.

If the game was presented in third-person, I could have seen it coming. Of course, the team working on it wouldn't want that. "We really argued about third-person versus first-person," Lindop says. "In third-person, you have too much information. Your character is hiding behind a desk, but the camera is up above and you see too much. You know more than the alien does. The fact that you can't see stuff in first-person really drives you crazy."

He's not wrong. As I try and fail to outsmart the alien a second and a third time, I can't help but think about the huge risk they're taking. In an age where most survival-horror games have become action games, Alien: Isolation has no guns and seemingly very little combat at all. And in an age where most games err on the side of giving too much information, Creative Assembly has very specifically chosen to hold things back from the player.

It's impossible to tell from a 20-minute demo if that risk is going to pay off or if it's just going to be frustrating. But I can say it's the most interested I've been in seeing how an Alien game turns out in years.