"When I see these games I get so nostalgic. There was a dream here." - Yu Suzuki at the Shenmue Classic Game Postmortem, 2014 Game Developers Conference.

After joining Sega in 1983, Suzuki focused primarily on creating arcade games, where the ideal experience was three minutes long. After years working on these games he decided he wanted to make a game that didn't have that kind of time limit. He began researching late 1980s role-playing games, using these as the formula for the game he would build.

"When I see these games I get so nostalgic," Suzuki said through his translator, PlayStation 4 architect and game designer Mark Cerny. "There was a dream here."

Suzuki researched RPGs and began building a prototype game on the Sega Saturn called The Old Man and the Peach Tree. Suzuki and his team tested camera and character controls, a conversation system and combat for the console using this prototype. In the prototype, players approach an old man asking if he knows a Kung Fu grandmaster named Ryu. The old man responds that he wants to eat a peach and will tell the player — a controlled character named Taro — where Ryu is if he brings him a peach. At the end of the game prototype, Taro witnesses the old man skip stones across the water that kill a fish each time they hit the surface. This leads him to believe the old man is grandmaster Ryu.

"There was a dream here."

In 1996, using the above described prototype as the basis, Suzuki and Sega began building a full 3D RPG. The team wanted to create a full size RPG in full 3D with recorded voice acting, a cinematic approach to scenes to increase the level of player emotional involvement, and support combat with multiple characters at once. The game would use the combat animations and engine utilized by competitive fighting series Virtua Fighter. The hero would be Akira, one of the characters from Virtua Fighter. But after traveling to China to research the game's settings and martial arts combat system, Suzuki decided to dramatically change the story.

Suzuki built a four-act plot for the title, using the themes of "sadness," "fight," "departure" and "starting afresh." Akira would face the death of his father, then overcome his grief and travel to China. Akira would have a "fierce" battle with another character, Randi, and emerge victorious before leaving on a new journey with a new friend. After creating this storyline, Suzuki created an orchestra suite with four dramatic movements, which he played for other writers before asking for assistance developing the story.

Suzuki brought in a screenwriter, a playwright, movie directors and other kinds of writers for "borderless development," a multi-level way of writing the script that wouldn't be solely honed in a gameplay-focused script. The writers created eleven chapters for the game, then created eleven corresponding illustrations.

But in 1997, Suzuki decided the game would move development to the next Sega console, what would eventually become the Sega Dreamcast. Because the game would be a console title with no limitations, Suzuki wanted no limitations: he aimed for five hours of movie scenes, four hours of multi-opponent battles with open areas, four hours of searching for items, eight hours of exploration and conversation, four hours to study and train martial arts, four hours in dungeons and four hours traveling between areas. This would have resulted in a 45-hour RPG, Suzuki said, a "game that could be played for a long time without getting tired of gameplay." This goal led the team to develop more open-world gameplay for the title. 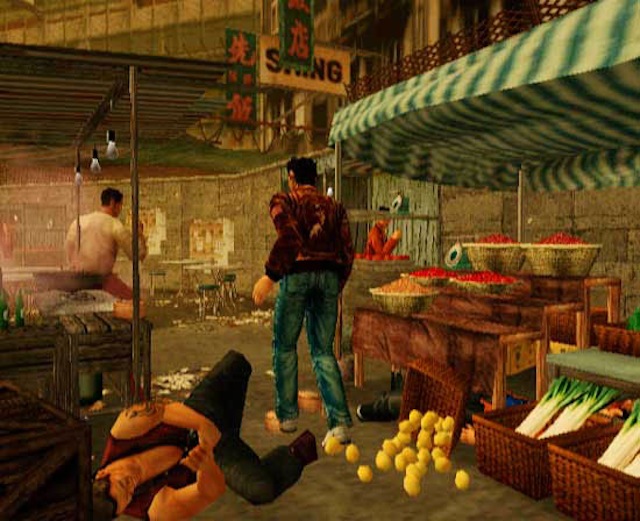 The Dreamcast had yet to be released at this time, and Suzuki based his development on personally predicted hardware specifications for the console. But in 1998, in order to become a fresh, "killer app" for the upcoming Sega machine, Virtua Fighter RPG: Akira's Story had its name changed to Shenmue: Chapter 1: Yokosuka. The characters and theme were changed. Each chapter of the story would be released as a separate title for the Dreamcast.

Suzuki also rethought the game's design keywords, settling on three new ones: "leisurely," "fully" and "gently." He added quick time events and free-battles to better fit the title's ever-developing open world. Suzuki said he wanted the player to fully choose between types of play, which is why a vast city, minigames and subquests were required to flesh out the world. The interspersed movie scenes would be made in real-time, high-quality 3D in an effort to elicit higher emotional involvement from players. The goal was to switch seamlessly between movie scenes and gameplay scenes.

The free battle areas would have more free gameplay, with players able to tackle more than one opponent at once. Players would select attacks and opponents without stress and could seamlessly switch between movies, QTEs and combat. The team also cleaned up camera tracking for the free battles, giving players a clearer look at the on-screen action.

At the time, vast amounts of data were required to achieve the kind of open world Suzuki wanted with Shenmue — at the time, 50 or 60 CD-ROMs would have been required to ship Shenmue as it was being developed. The team started developing new data compression algorithms to make the game fit onto less discs. Developers worked with professional interior decorators to design rooms and furniture to create realistic interior areas for players to move through. Each NPC, to root them in real life, had a daily scripted schedule which included waking up, going to work, going outside, eating lunch and traveling home. A "magic weather" system was implemented, adding in algorithmically-generated weather and day-night cycles based on the real-world weather in the game's setting — Yokosuka, Japan in 1986.

"It's frightening to think we managed this project basically by pushing around pieces of paper."

The year 1999 was spent in repeated bug testing cycles. The team would find more than 300 bugs each day, adding them to their list to fix. The QA team recorded video all day as they worked 24/7 to pick out all the bugs. Coca-Cola and Timex brands were added to in-game objects, such as soda vending machines. The team had to adjust all vending machine positions within the world per the company's orders, another time-consuming "bug fix."

"The biggest challenge we encountered was project management," Suzuki said. "By the end, we had 300 people [working] and no experience on such a large project. At the time there were no project management tools...so instead we made a job order sheet that was a list of action items in Excel. Because we kept testing, the items did not decrease. At one point we had 10,000 of them.

"It's frightening to think we managed this project basically by pushing around pieces of paper," Suzuki said.

Shenmue was released in winter 1999, with its sequel following in 2001. A third Shenmue game was announced and then canceled, and rumors of the game's possible development have been swirling ever since. According to Suzuki, there is still no news on this supposed third game, which would likely close out the story ended with a cliffhanger in Shenmue 2.

"I will make one if I have the right opportunity..." Suzuki said.