World of Diving is an open, relaxing foray into virtual reality SCUBA diving

Share All sharing options for: World of Diving is an open, relaxing foray into virtual reality SCUBA diving

I was underwater the first time someone at the Game Developers Conference asked me to take a selfie.

During my demo of World of Diving, an upcoming title that offers procedurally generated environments and social SCUBA diving, the developer showed me how to detach my camera from my diver's body, and I was able to swim around and take a picture of "myself" in front of an underwater statue.

The camera is an in-game item, and you have to bring it up to your virtual eyes and use the viewfinder to take images during the game's missions. We were in the middle of a mission that involved turtle photography, which is more interesting in person than it sounds on paper.

You see much of your body while diving, and the game will include full customization options for both genders, but for the demo both characters were female.

Richard Stitselaar, the creative director of Vertigo Games, explained the game's tone. "World of Diving is an arcade, multiplayer, online diving adventure. It's not a simulation," he said. You can salvage wrecks, collect treasure, go diving with your friends, create your own treasure hunts and missions, or just take pictures of different fish and structures. It's not meant to be realistic, or to teach you diving, but to allow you to get a feel for what an ideal dive may be like. 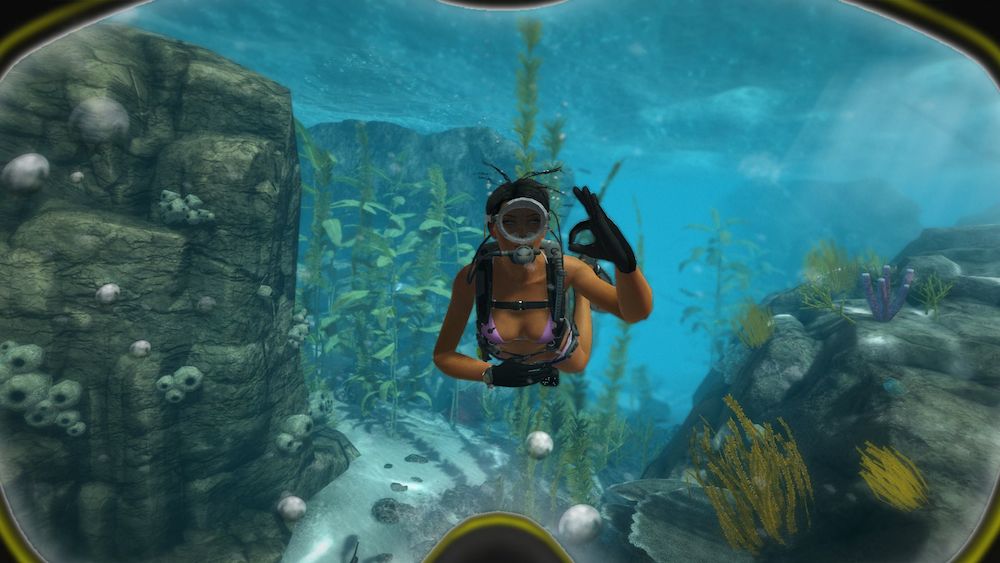 The game will be a premium release, with microtransactions. "You pay once, and then play for free after that," he explained. "There are options to buy gear in the game, but it will be vanity items. And 50 percent of the items in the online store will be free anyway."

There was refreshingly little "game" in my demo. We simply dove together, and he pointed out interesting looking fish and we went into a cave, turning on our diving lights so we could see in the darkness. We found a wrecked ship on its side and we explored for a bit, enjoying the act of being inside a structure where everything was stuck at a 90-degree angle.

It was strange to feel a sort of claustrophobia inside these caves and wrecks, and the small amount of panic that comes when you look around in the dark and realize you can't see your companion for a moment until Stitselaar explained how to use the in-game icon to find him again. I've done some light cave diving myself in Florida, and the game captures the odd combination of calmness and fear that comes with these underwater environments.

It was stressed that the game wasn't a simulation, but there are a few concessions to the real-world act of diving. You use in-game hand gestures to communicate with other divers. You inflate or deflate your buoyancy control vest to move up and down in the water, just as you would in real life. The game's environments may be procedurally generated so you'll always be able to explore, but the game also includes real-world landmarks that are famous in the world of SCUBA diving.

There will be races using your little propeller-driven craft and timed events where you compete with your friends to do certain tasks, but I had more fun to looking around, taking pictures of fish, and enjoying the sense of being underwater. This is the fun of virtual reality; the act of exploring a new environment was quietly joyful.

The act of exploring your environment and communicating through gestures and nods, taking pictures of your in-game avatar around interesting locations in the game is attractive. I'm skeptical of how fun the game will be on a standard screen, but it was impressive on the Rift.

The first released prototype will consist of a house and swimming pool that you can customize and use to practice your diving, but soon the tunnel to the ocean that you'll find inside your pool will open, and then you'll be able to explore the wider world. "This door will be opened in three weeks or so, after release," he said. "And then the next area, and the next area." As long as people keep buying and voting, it never has to end.